Whether it be just a personal favorite or something meaningful, every player has a reason for wearing their jersey number.

Share All sharing options for: UConn women’s basketball players explain why they picked their jersey numbers

At their most basic level, jersey numbers are nothing more than an identifier for players to fans, referees, broadcasters and anyone else watching the game. Yet for many players, they mean so much more than that. Jersey numbers often don’t just identify a player, they become part of their identity.

We asked each member of the UConn women’s basketball team why they picked their respective jersey numbers. Each had a different story, but everyone had a reason.

Let’s get into it:

“I wore number 3 when I was younger. In high school I couldn’t wear it because someone had the number before me but I always wanted to go back to it and the opportunity was there.

“I had to call Morgan Tuck and ask her if I could wear her jersey (number). But I know the number has a legacy behind it so I’m just trying to fill that.”

On her conversation with Tuck: “We talked a little bit. She was like ‘Sure, no problem. It’s fine, just rep it right.’”

“Well, you want me to say Sue Bird right? I just wore number 10 like my whole life. When we were in the town basketball league, they had all the jerseys laid out and I went ‘Alright, 10, why not?’ I never had anyone that ‘Oh they’re 10, so I want to wear 10.’ Then growing up I loved Sue Bird so it was kind of intimidating having to ask her for it when her and the Seattle Storm came to practice here. CD told me that I had to ask her. I wore it my whole life and my older brother said, ‘You know Molly, you can’t just not wear it.’ He would be mad at me if I didn’t. And it was an excuse to talk to Sue so that was kind of cool.

“We were all sitting over there and she came and said hi to everyone and I was one of the last ones. I was really nervous and didn’t hear anything anyone else was saying until she got to me and I said hi and shy little freshman, I was like ‘Is it okay if I wear number 10?’ and she was very nice about it. She said ‘Yeah sure, it’s no worries.’

“It’s kind of a reminder when I see her and see all the names up here, you can’t come here and not work hard every day. Because you have these incredible players that played with the UConn name across their chest and Sue had number 10, if I came in and didn’t work hard, that’s just a slap in the face to everything that they’ve done. So that’s a constant reminder too.”

“It’s my sister’s birthday, December 13. And it’s kind of a family number so I wear it.”

“It’s my first jersey number that I started playing with when I was back home — my first secondary school, St. Angela’s, Youngbloods. I didn’t get to wear it at Gardner-Webb but I wore it at Murray State. But yeah, just my first-ever jersey number and the number I wore when I first started playing the game and I hope to keep playing it through my whole career. It’s something that means a lot.”

“It’s a personal favorite of mine. I don’t think there’s any sentimental meaning towards it, I just really liked the number.”

“22 is my original number. It signifies something for me with my family. My grandfather from my dad’s side, his birthday’s on the 22nd. His wife’s birthday is on the 22nd and their anniversary is on the 22nd so it means a lot to me. I’ve always worn number 22 and if I can’t wear 22, I wear 2. It’s think it’s really cool now that I’m here to wear my number. So I’m excited.”

“Pheesa (Napheesa Collier) is a great player, she played great in this number. I played in this number before and I thought it was going to be a good number for me. A lucky number.”

“I wore 25 my whole entire life. My parents were high school basketball coaches and my favorite player when I was was younger, she wore 25 — Emily Suhey. She played at Villanova (from 2009-2013). She was just my favorite player and I always stuck with it.”

“(Suhey) always played with me. I was always the coach’s kid so nobody wanted to, but she was a manager for the middle school team and for the high school team so she would always play with my dolls, board games or anything like that. She’s somebody who would always talk to with me and she’s such a nice girl too. Easy to coach, she worked really hard. I don’t know, I always really enjoyed her, my parents enjoyed her, really great family. So yeah, I just liked number 25.”

Griffin’s father, Adrian Griffin, spent 11 years in the NBA and wore No. 44 for all but three seasons.

“It means a lot (to wear his number). During my high school career, he wasn’t able to come to all the games so a piece of him was here wearing No. 44.” 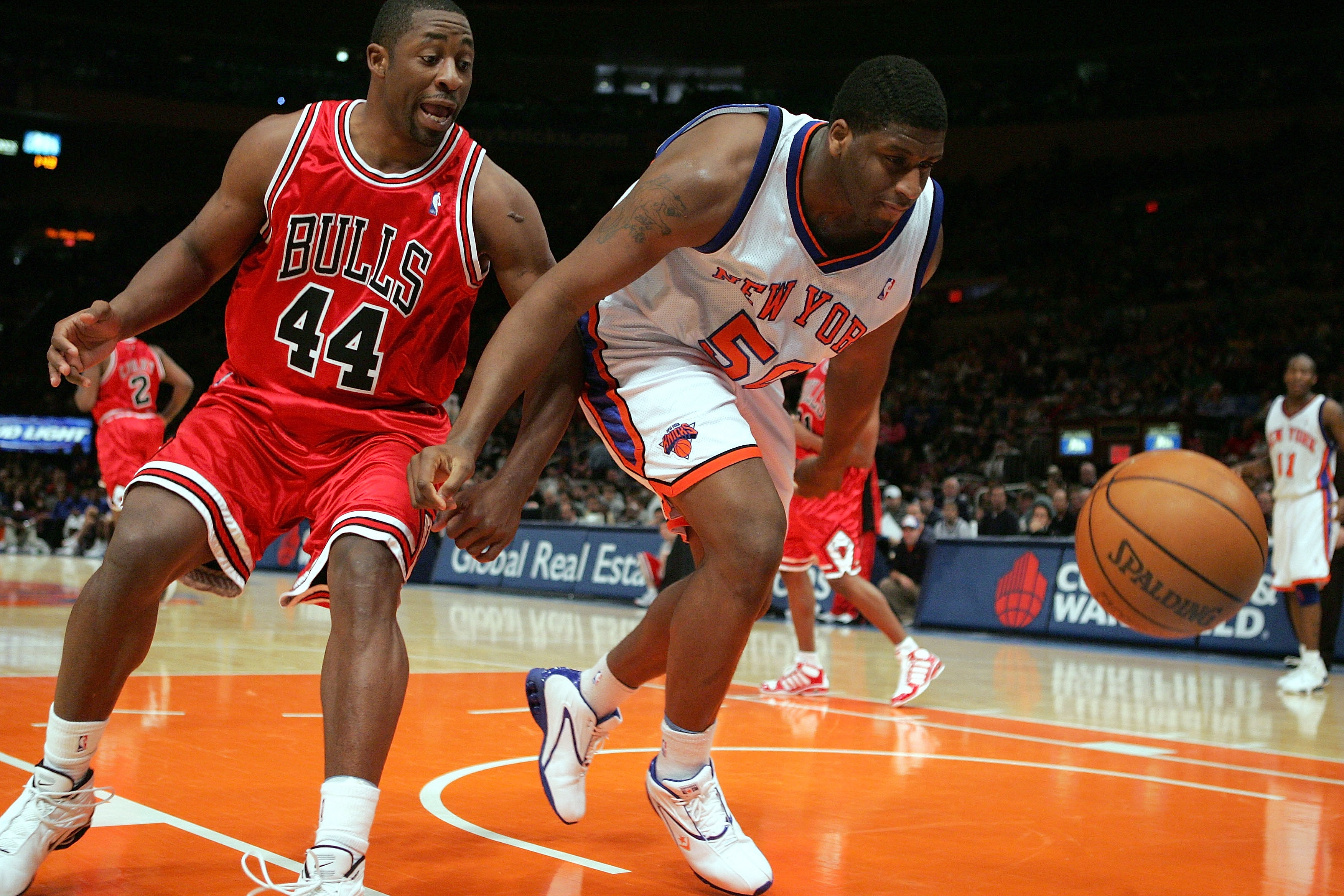 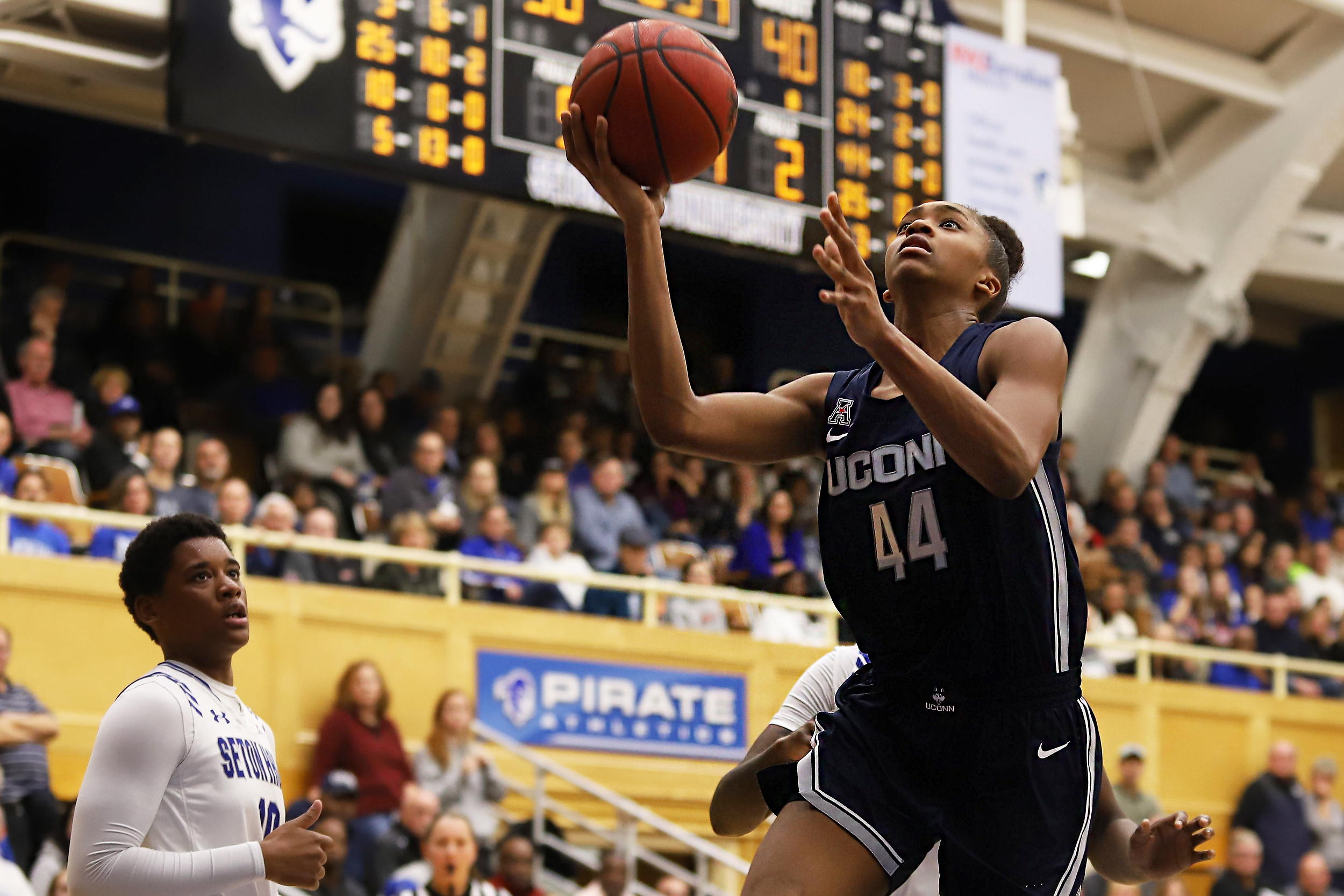 As the program’s only Hall of Famer (for now), Lobo is the sole player to get her number retired on the women’s side.

“I wore number 31 in high school and I don’t have any idea what number I wore before that because now numbers are a really big deal for kids. The first thing you ask, ‘Can I be this number, that number.’ That’s not the way it was when I was a kid. I got to high school and my coach Jim Vincent said ‘I ordered this uniform extra long, it’s yours’ and it was number 31. I didn’t choose that number either.

“Coming here, Wendy Davis was here. She wore 31, she was a great shooter on that team. I had to figure out what number I wanted to wear. I was a big David Robinson fan at the time — big Larry Bird fan too but Megan Pattyson was 33 — huge David Robinson fan so I chose number 50 and that’s what I was for the rest of my career. And nobody has worn it since. Has anyone worn 52? Kara Wolters and I, if you choose a number in the 50’s, you’re safe. It doesn’t have to be retired, nobody’s going to wear it anyways.”