The Huskies erased a two-goal deficit to give Margaret Rodriguez her first win as a head coach.

Margaret Rodriguez earned her first win as UConn women’s soccer head coach after the Huskies defeated the CCSU Blue Devils 3-2 at Morrone Stadium. UConn (1-2-0) trailed 2-0 in the first half before a goal from Pato Jerzak put the Huskies on the board just before the half. It was Jerzak’s first career goal. 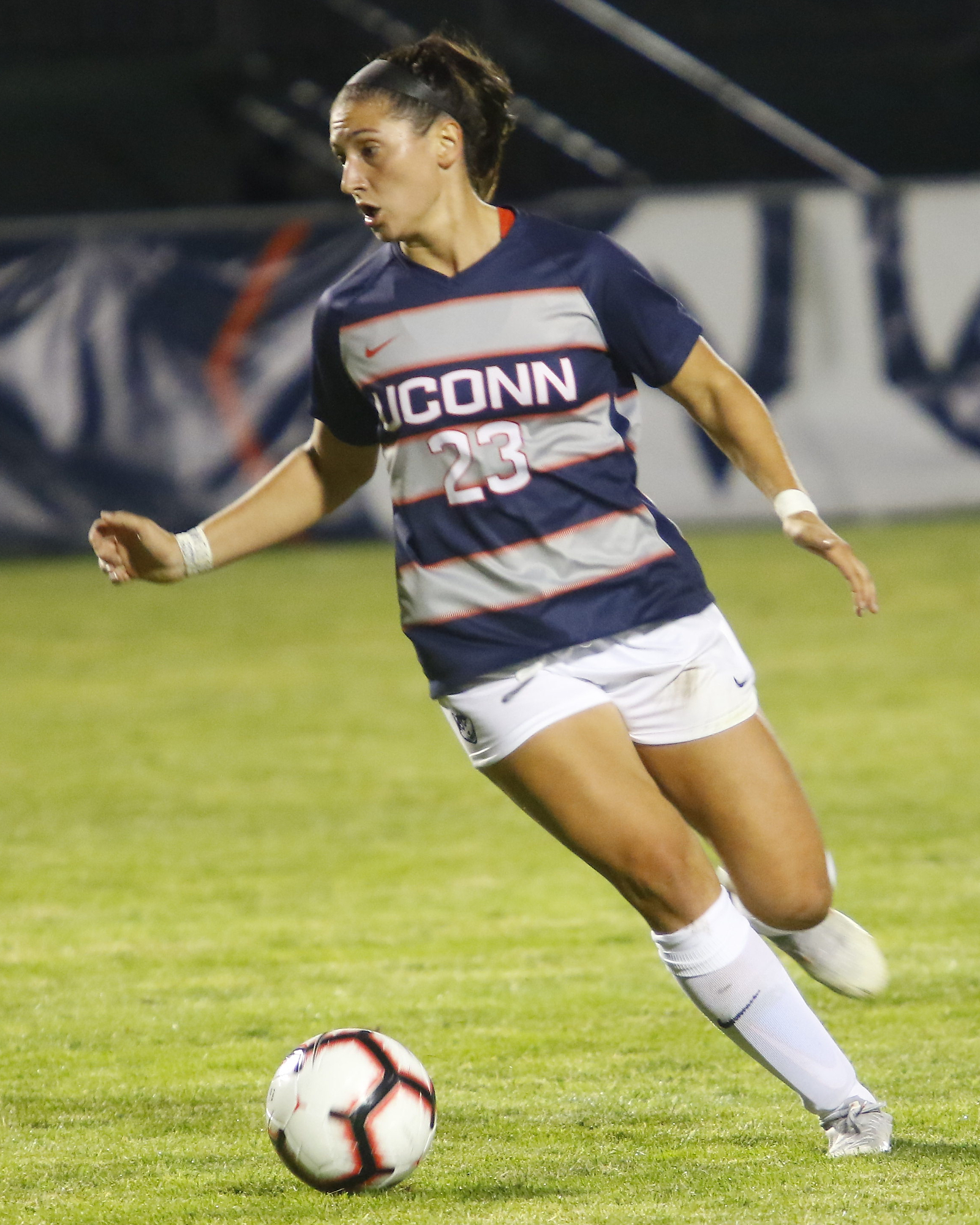 In the second half, Erin Spillane put home a rebound from a Yamilee Eveillard shot to even the game at two and Sophia Danyko-Kulchycky gave the team the lead for good on a curling shot from beyond the 18-yard box.

It was the first time UConn won after trailing by two goals since they did so at Portland on Sep. 14, 2003.

It’s fitting that Rodriguez’s first career victory came over CCSU, where her sister — Jen Prozzo — is an assistant coach. However, the Huskies’ coach was quick to mention the victory was “bittersweet”.

“My sister and I are very competitive, we fight for everything out there but we always look over our shoulder and make sure the other is doing just as well,” Rodriguez said. “To get a win is great but now I’ll turn around and call my sister and say, ‘Okay, what can you do to improve?’ I’m not gonna lie, I’m happier being on this end of it but it’s bittersweet.”

A big part of the win came from changes to UConn’s backline. After starting the same four players in the first two games, Rodriguez put Swiss freshman Aline Christen on the bench in favor of sophomore Melina Couzis, who had been playing defensive midfield.

But after the Huskies conceded two goals, Rodriguez made even more changes, moving senior Heidi Druehl from right back to the defensive midfield spot and sliding senior Elena Santos back from wing to outside back.

The changes were evident as the tide shifted back into UConn’s favor after the Blue Devils seemed poised to come away with a big win.

“Those changes helped a lot,” Rodriguez said. “Elena has always been an outside player and she’s comfortable defending out there and I thought she had some time and space to attack out of that position.”

The coach was quite please with Druehl’s performance in the midfield.

“I’ve been trying to rotate her there earlier in the year and just didn’t feeling comfortable taking her from the backline,” she said. “But I thought she destroyed and connected passes for us and that’s all that position requires.” 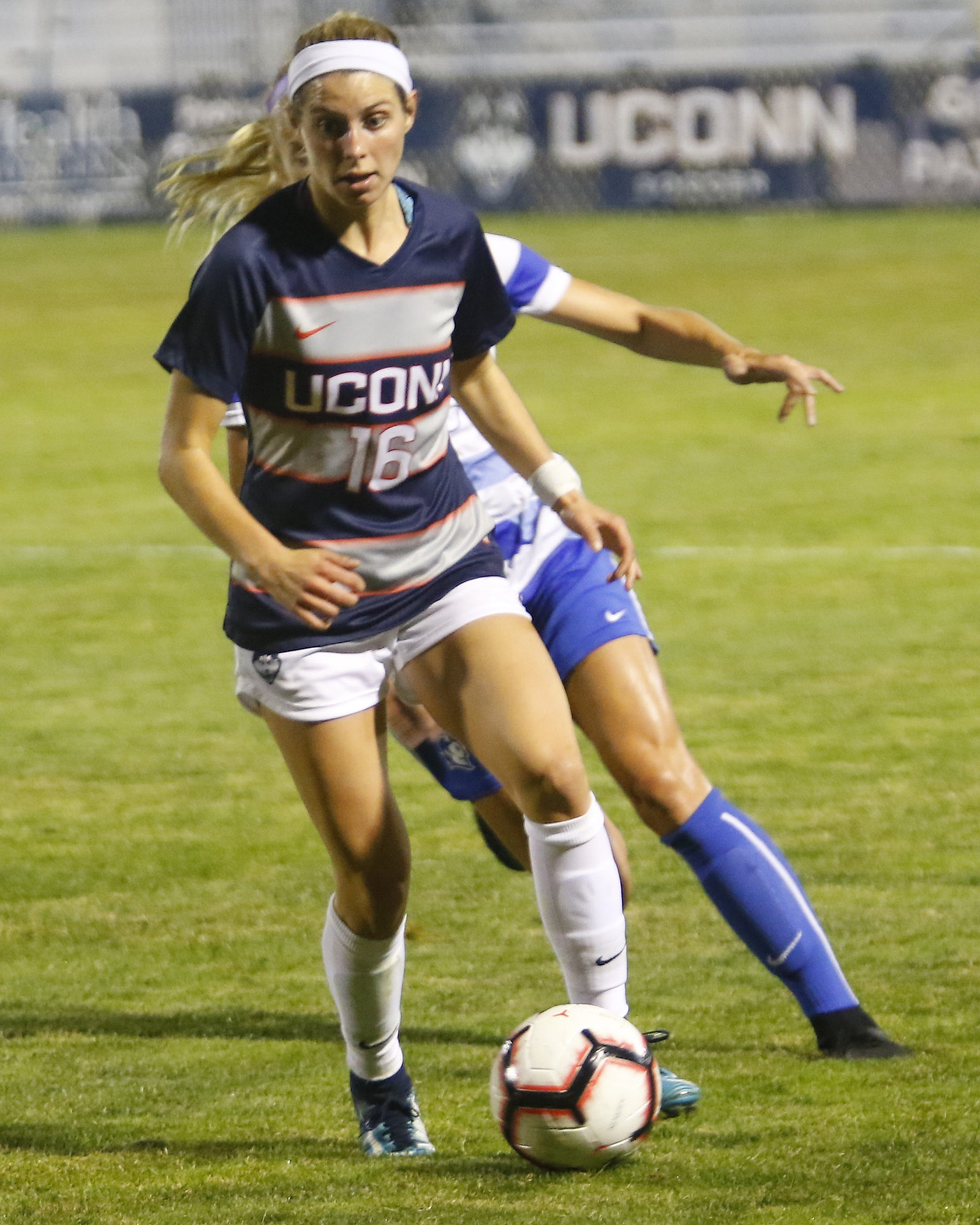 One player that hasn’t changed on defense is junior Regan Schiappa. After playing forward her first two seasons in Storrs, she converted to outside back and has been a critical presence for the Huskies.

“She’s fast, tenacious and she never gives up,” Rodriguez said. “Those are qualities you can never teach, you can’t develop, you either have it or you don’t and she’s always had that in her. It’s just she needed a little bit of maturity under her belt and she needed to understand the position a little bit more this year. We can’t afford to not have her out there because of her work rate.”

Luckily for Schiappa, outside back is far from a foreign concept for her. The Bedford, New Hampshire native came in as a defender before the coaching staff tried to convert her to an attacker.

“I feel more confident, more home at outside left back,” Schiappa said. “[Liane Keegans] back there helps me a lot to stay calm. I’ve learned to take a breath when things are getting frantic and keep settled.”