Head coach Randy Edsall had high praise for everything Williams brings to the Husky program.

Share All sharing options for: Donovan Williams Moving on After Tumultuous Start to His UConn Football Career

During UConn football’s camp last August, head coach Randy Edsall approached then-quarterback Donovan Williams about potentially playing special teams if he wasn’t one of the top two options under center— no mention of a position change.

But the next day, Williams entered Edsall’s office and said he’d not only be open to playing special teams but also moving to wide receiver in order to get on the field more. Now with a season under his belt at out wide, he’s starting to settle into his new role. 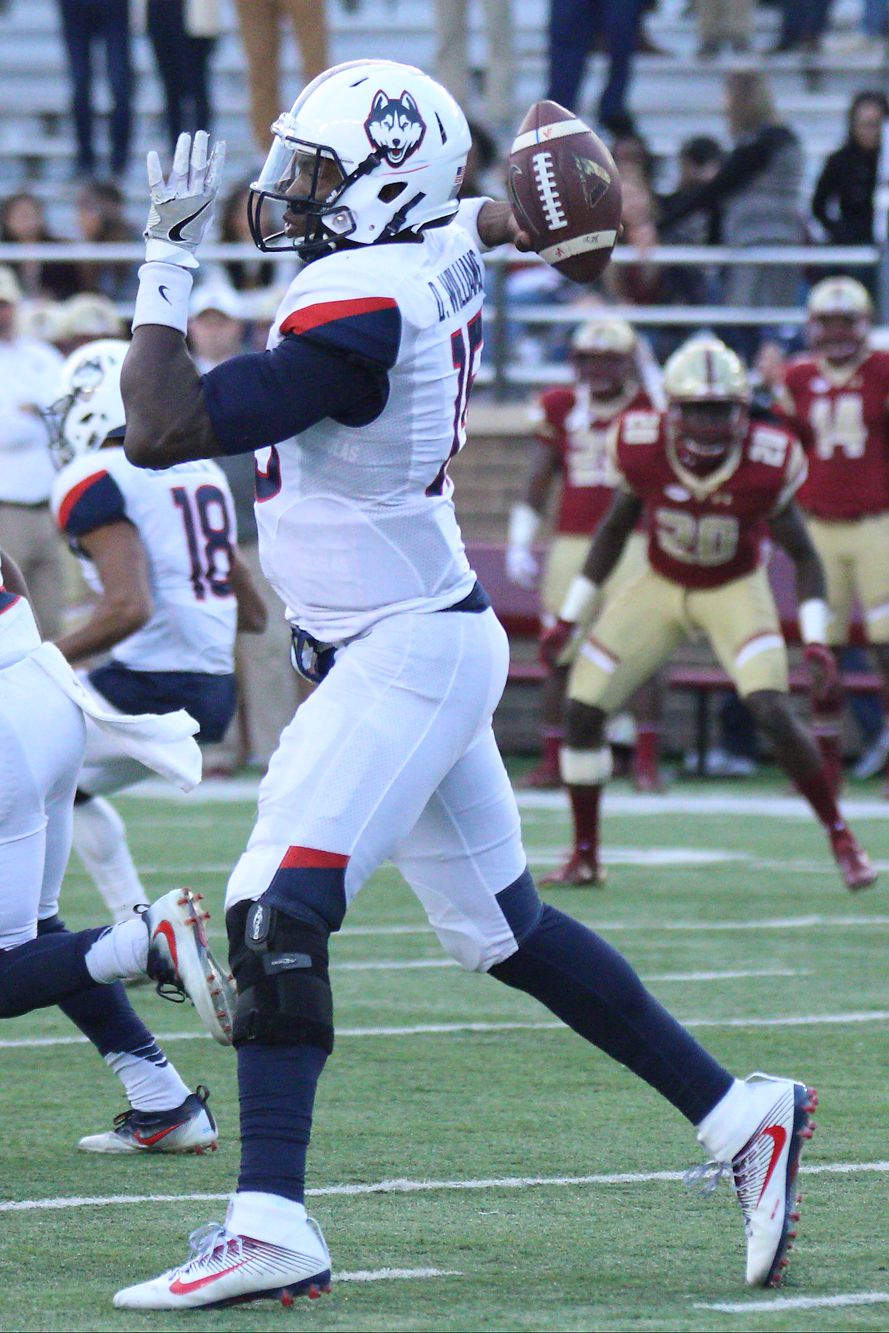 Throughout his recruiting process, Williams was sought after as both a quarterback and an athlete, so a transition away from his high school position was always a possibility. However, he came to UConn to play quarterback and the decision to move away from it certainly wasn’t easy.

Unfortunately, quarterback was not going very well for Williams. He was thrown into the fire as a true freshman and then when a new coaching staff took over the next year, they added a junior college transfer in David Pindell and brought in two talented freshman quarterbacks.

“It was tough because quarterback was what I had done for so long,” Williams said. “[It was] a position I started to love but I love football more, so after I made the switch I buckled down and did what I had to do. I’m loving receiver.”

Another challenge for Williams was learning how to contribute on special teams. As a quarterback throughout high school, he hadn’t been a special teamer since his Pop Warner days in middle school.

Edsall believes special teams prowess is one of the most important attributes for a receiver with aspirations to play at the next level.

Edsall noted how former Husky Marcus Easley made a career as a core special teamer, playing four seasons with the Buffalo Bills.

“He earned his niche doing that at UConn. If he didn’t do that, he wouldn’t have been as marketable when teams looked at him,” Edsall said about Easley. “Him being smart enough to realize ‘I have to take advantage of this opportunity’. So that’s what you want guys to understand, you bring guys like that back so they can talk to guys and let them know those things.”

Few players have had a more turbulent two years at UConn than Williams. At the start of his true freshman season, he was the scout team quarterback and was fully expecting to redshirt.

But shockingly, nine games into a horrible season, then-head coach Bob Diaco decided to bench starting quarterback Bryant Shirreffs (who played injured all season) after a brutal 41-3 defeat at ECU and burn Williams’ redshirt in a desperate attempt to ... save his job?

The decision was easy to criticize right off the bat. It backfired dramatically as the Huskies failed to score in the two of the final three games and Diaco was not able to buy the time to save his job by way of a true freshman QB miracle. To make it worse, Williams had a torn meniscus at the time and was still put in.

“It affected me a good bit. I wasn’t able to do all the things I could,” Williams said of the injury. “I was still able to run but not to my best ability but I think it hindered me mentally, holding me back.”

Despite such a poor decision by his head coach, Williams maintains that he was willing to lose a year of eligibility to play those final games.

“At the time I was behind my team, my team was behind me,” he said. “Obviously, things didn’t play out the best way but you take that experience and learn from it and move on from it.”

“[Donovan Williams] epitomizes what we want in a UConn football player.” - Randy Edsall

Then, an article from a local newspaper near his hometown (now deleted) reported this past winter that he would transfer from UConn, with quotes from a member of his family. Ultimately, the report turned out to be false, but that doesn’t mean Williams didn’t consider transferring.

“At that time, I was contemplating leaving but I decided to stick it out because I think this is the best opportunity for me,” he said. “Following Coach Edsall’s lead is something I want to do and coming together with my teammates and bringing that success back to the program is definitely something I want to do.”

The way Williams handled everything thrown his way certainly wasn’t lost on the coaching staff as the Dumfries, VA native earned the responsibility of special teams on the leadership council. Edsall sees him as a model of how players should deal with adversity.

“He’s been unbelievable in terms of doing everything the right way, working his tail off, being a leader, you couldn’t be more proud of a young man than Donovan,” Edsall said. “He epitomizes what we want in a UConn football player and then he’s out there doing it himself and helping other guys understand those things.

“He’s been through some tough things so he can say to other guys, ‘Hey, sometimes things don’t go your way but hang in there and things will work out.’”

Despite being one of the quieter players on the team, Williams’ words hold weight to his fellow teammates.

“Donovan has embraced all the things we’ve asked him to do. He works hard,” Edsall said. “He doesn’t say a whole lot but when he speaks guys on the team listen. And that says volumes to who he is.”

The path certainly hasn’t been easy to this point for Williams. But he’s confident it’s going to work out in the end.

“It’s been up and down,” he said on his career so far at UConn. “I’d say it’s been a bit of a roller coaster, but I think it’ll all be worth it once we go out and show everyone what we can do.”