The two former Huskies appeared in the magazine’s most recent edition.

Share All sharing options for: Former UConn Stars Sue Bird and Breanna Stewart Make a Statement with Appearance on ESPN: The Body Issue

Former UConn women’s basketball stars Sue Bird and Breanna Stewart both appeared in the most recent edition of ESPN: The Body Issue and for different reasons, their inclusions were important.

Sue Bird appeared with her partner Megan Rapinoe as the first openly gay couple to not only be featured in the issue, but on the cover as well. Bird spoke about the importance of this edition to the LGBTQ community. 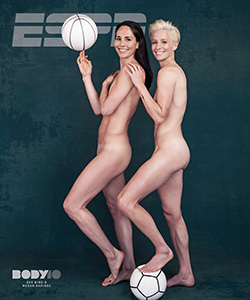 “I hope it will change people’s outlook on things and changing the narrative and the conversation and the more normalized it becomes, the easier it becomes and that’s how I see it,” she said during a recent conference call.

Bird said the feedback to her appearance has been “99.9% positive” and the few detractors had more issue with the dislike of the naked bodies more than anything. However, that’s not how Bird views the magazine.

“It’s celebrating the athlete body and what it takes to be an athlete, and all the time and care you put into it and a healthy lifestyle,” she said. “We all look different if you look at that magazine. You see all different body types but at the end of the day it’s people taking care of themselves to perform at the highest level.”

The ESPN Body Issue is out.

Congrats to Sue Bird and Megan Rapinoe — the first openly gay couple to be on the cover, and featured in the issue.https://t.co/HDjbOVtAR7 pic.twitter.com/RQVbfxk4F7

Breanna Stewart joined the #MeToo campaign, a movement to show how widespread the issue of sexual assault and harassment is, by revealing that she had been molested as a child by a family member. Taking part in the body issue is part of “taking her body back.” She echoed Bird’s comments that it was an overall positive experience.

“It’s been mostly positive feedback,” Stewart said. “Being able to be in the body issue is a big deal because of what we’re doing behind the scenes in terms of taking care of our bodies.”

Their former head coach, Geno Auriemma, said he last spoke to Stewart at Chris Dailey’s Women’s Basketball Hall of Fame Induction earlier this month. He was happy to see how positive the last few months have been for the four-time national champion.

“She’s pretty proud of herself,” Auriemma said. “She’s in a pretty good place.