Saturday night’s game was dedicated to the mom of UConn’s Andrew Geres who passed away this week.

UConn Men’s Soccer battled to a 1-1 draw with No. 18 Georgetown Hoyas on Saturday in front of 3,981 fans at Joseph J. Morrone Stadium.

The Hoyas and Huskies were even in shots at eight apiece and Georgetown had a 9-to-2 corners advantage. Scott Levene made three saves.

“They did a good job of pressing us,” Reid said. “They’re good.”

UConn has been struggling offensively through their first few matches but started off strong against the Hoyas with an early goal. 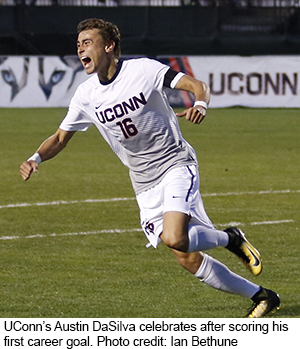 Abdou Mbacke Thiam corralled a deflection and played an excellent through ball to Austin DaSilva, who put the ball under JT Marcinkowski for a 1-0 lead in the 14th minute.

“It was a great pass from Abdou,” DaSilva said. “I love scoring goals.”

DaSilva had a strong game. In the 19th minute, he took a hard shot on a volley from inside the 18-yard box and on the Georgetown counterattack, made a tackle on the other side of the field as the Hoyas were making a move into the offensive third.

In the 33rd minute, the Huskies almost doubled the lead when Niko Petridis had an opportunity in the box, but solid defense prevented the chance.

Georgetown got one back in the 37th minute on a penalty shot. Andrew Geres tripped up a player on the left side of the box, just above the end line and Christopher Lema put the ball to the right when Levene guessed left to tie the match.

“Andrew just happened to be on the wrong side of him and the kid just slowed down and backed up,” Nkosi Burgess said. “It was a foul, unfortunately.”

The second half proved to be a series of missed chances for the Huskies as well as the Hoyas, but neither could score. UConn had more offensive chances but Georgetown held more possession, especially as the half wound down.

The match moved on to extra time and the Huskies almost ended it in the first half of the extra session. Petridis played a ball to Mbacke Thiam at the top of the 18-yard box and he flicked it on to DaSilva who almost beat Marcinkowski short side in the 97th minute, but he made the save.

“[DaSilva] almost won the game for us,” Reid said.

UConn (1-2-1) will get back out on the field on Tuesday when they take on the Hofstra Pride at Morrone Stadium. Kickoff is at 7 p.m.