The Huskies held on for a mid-week win over their in-state rivals.

Ronnie Rossomando gave the Huskies 5 2/3 innings of work as the starter, allowing just one earned run on two hits, but he had problems with control at times, allowing five walks to go along with five strikeouts.

Right fielder Isaac Feldstein and left fielder John Toppa each had multi-hit games, with Feldstein going yard to give UConn some insurance runs in the late innings.

The Pioneers struck first with a RBI single in the third before UConn tied it up in the fourth.

Toppa hit a lead-off single to break up the combined no-hitter by Sacred Heart pitching and came home on a sacrifice fly by third baseman Willy Yahn to make it 1-1. 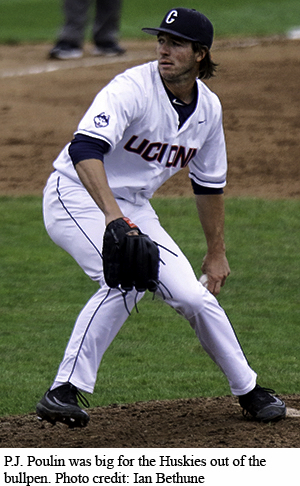 UConn came back for two more in the fifth. Center fielder Troy Stefanski doubled and after shortstop Anthony Prato was hit by a pitch, Toppa brought the pair home with a single up the middle.

Sacred Heart almost broke through in the eighth, loading the bases with nobody out, but PJ Poulin made the play on a come-backer and turned a 1-2-3 double play before another groundout ended the threat and preserve the 3-1 lead.

Feldstein put it away in the bottom half of the eighth with a home run to left field to make it 5-1.

UConn (26-20) resumes conference play this weekend with a big series against USF. The Bulls are currently first in the conference, but the race is tight as UConn is only two games back in fourth place.

First pitch on Friday is at 3 p.m.