Alex LeFevre gave the Huskies a huge win over the Rams in extra innings. 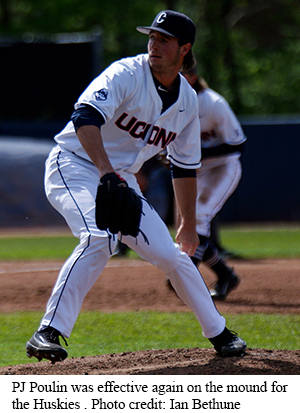 Husky starter PJ Poulin gave UConn four shutout innings and allowed only two hits in what was supposed to be a staff day.

“PJ has an electric arm so we just came right at them to see if they could hit his fastball,” LeFevre said.

Rhode Island took a 3-0 lead in the fifth on five hits, all singles. Dan Rajkowski allowed four of them before CJ Dandeneau struck out Chris Hess looking to keep the deficit at three.

The Huskies began the comeback in the seventh when Prato hit a sacrifice fly to right field to score center fielder Troy Stefanski. They could have had more, as the bases were loaded with one out at the time, but they stranded runners to leave it at 3-1 after seven innings.

Yahn closed the lead to one in the following frame with a double into the left-center field gap. Laurence Hill misplayed it coming over from left field and allowed Feldstein to score all the way from first base, setting the stage for a ninth-inning comeback.

In the ninth, Prato singled with two outs and scored after left fielder John Toppa hit a chopper to third. Matt O’Neil threw the ball away and Prato came home all the way from first to tie it.

Feldstein led off the 10th with a double but was cut down at third on a sacrifice bunt from second baseman Aaron Hill that moved Yahn to second.

LeFevre came to the plate with two out and after seeing three balls, got the green light to swing on a 3-0 count. He singled hard up the middle and Yahn came around to clinch the victory.

“I looked over at Coach and he said ‘go ahead’,” LeFevre said of his swing on the 3-0 count.

UConn (29-22) will play next on Thursday at Dunkin’ Donuts Park in Hartford against East Carolina. Tim Cate will be on the mound for a 7:05 p.m. first pitch.