Zac Susi played the hero as the Huskies take the series opener.

Share All sharing options for: UConn Baseball Tops No. 23 USF in Extra Innings

UConn Baseball got an extra-inning triumph over No. 23 USF off the bat of catcher Zac Susi, who hit a line-drive single for a 2-1 win in the 10th inning.

Third baseman Willy Yahn had the other UConn RBI and had two hits. Shortstop Anthony Prato and left fielder John Toppa each had multi-hit games.

It was a battle of two tremendous starting pitchers in UConn’s Tim Cate and South Florida’s Phoenix Sanders. Both left with no decisions but each put their respective team in position to grab a win in the series opener. 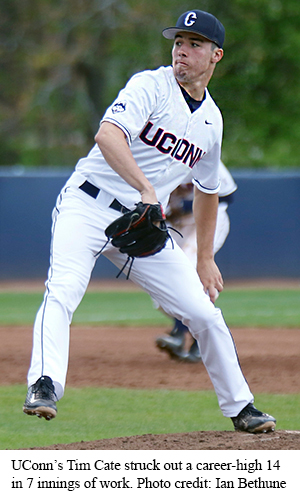 Cate dazzled as he pitched seven innings, allowing one run on six hits. He walked three and struck out a career-high 14.

The Bulls got on the board first, in the fourth inning. Coco Montes led off with a double and after moving to third on a fly out, scored on a wild pitch from Cate.

After Montes’ double, Cate allowed only a pair of walks and a two-out double through his final three innings as he notched six of his strikeouts.

Sanders gave his team 6 2/3 innings of work, also allowing just one run on five hits and three walks. He struck out nine and frustrated the Huskies throughout his outing.

Shortstop Anthony Prato led the game off with a single and third baseman Willy Yahn singled in the second, but UConn did not grab another hit until the sixth.

The Huskies finally got something going in the seventh.

Right fielder Isaac Feldstein hit a sinking line drive that got under the diving Garrett Zech in center field for a triple. Yahn then hit a first-pitch line drive the opposite way down the first-base line to tie the game.

UConn ran into some trouble when USF worked three consecutive walks to load the bases with one down in the ninth, but PJ Poulin drew an inning-ending double play to end the threat.

The Huskies went scoreless in the bottom half to send the game to extra innings.

In the bottom of the 10th, first baseman Chris Winkel and Prato led off with singles before Toppa was hit by a pitch to load the bases. Susi came to the plate and hit a line drive over shortstop for the walk-off win.

This game was the first of a doubleheader. Mason Feole will take the mound for the Huskies (27-20, 11-8) at 3 p.m. against the Bulls in the day’s second game.