The Huskies pushed through a tough first half to earn their 97th-straight win running away.

Share All sharing options for: UConn Women’s Basketball Uses Strong Second Half to Blow Past Tulsa, 96-50

On one of the biggest sports days in the year, UConn Women’s Basketball blew out the Tulsa Golden Hurricane with a 96-50 win. But it wasn’t as easy as the final score suggests.

The Huskies held an iron grip from start, but that control didn’t immediately show up on the scoreboard. On offense, UConn got good looks both inside and behind the arc but struggled to find the basket, shooting just 4-of-12 before the first media timeout.

“I don’t know that I would trade any of the shots that we took in the first half,” said head coach Geno Auriemma. “Most of them were the same shots we’ve been taking all year and they just don’t go in.”

Following a pair of free throws from Gabby Williams out of the under-five, the Huskies came out in a full-court press. It worked on the first few possessions but once the Golden Hurricane settled into their half-court set, UConn’s defense struggled to rotate and allowed a couple of uncontested layups. 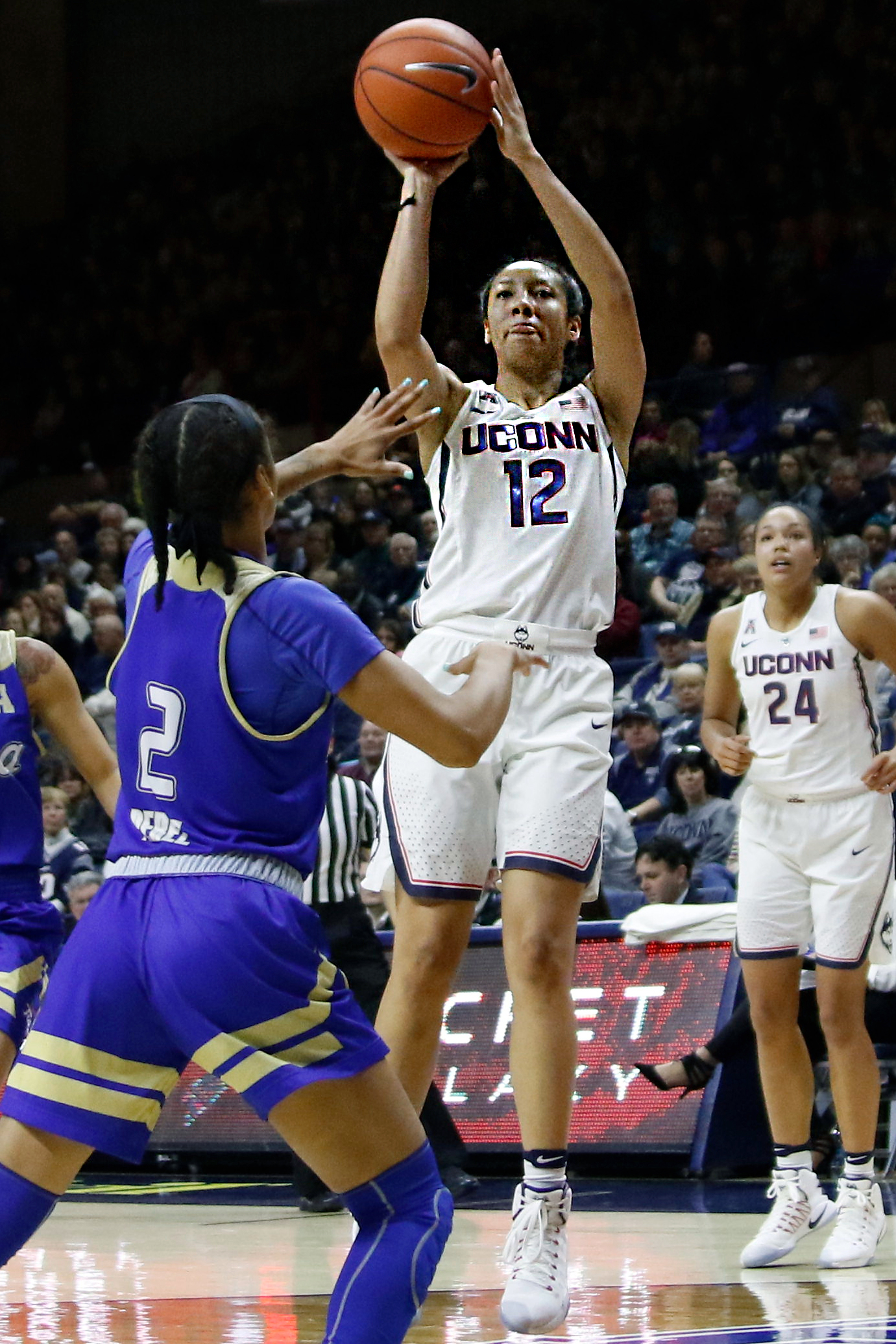 With the team struggling, the Huskies lone senior, Saniya Chong, stepped up. The only player in the starting lineup outside the “Core Four,” Chong’s contributions as a facilitator often go unnoticed behind the jaw-dropping play of her teammates.

But today she took center stage. The senior avoided negative plays, finishing the half without committing a foul or turnover. She did a little bit of everything, dropping nine points while grabbing four rebounds and dishing out four assists.

“She looks so comfortable out there and looks in charge of her own emotions, of her game,” said Auriemma. “There isn’t anything haphazard about it. Everything seems to be exactly where she wants it to be on both ends of the floor.

“She’s having the type of senior year you want to have.”

The top benefactor of Chong’s play was Napheesa Collier. The sophomore shouldered the scoring load with 17 first half points to along with eight rebounds. She was a stabilizing force in the low post with both Gabby Williams and Katie Lou Samuelson struggling.

“If someone’s having a bad game we try and pick them up however we can,” said Collier. “The team was doing a good job of giving it to me in the post so I just shot it.”

Gabby Williams had just one point in the first half and shot 1-of-4 from the free throw line. In the second quarter, Geno made the surprising decision to put Williams on the bench in favor of freshman Kyla Irwin, instead of Natalie Butler.

“She’s a little bit out of sorts right now and I could see it in the first half,” said Geno. “I thought it would be best to give her a chance to sit and watch. She played great in the second half so sometimes you just need to be removed from it.”

Despite not playing one of their better halves, UConn still went into the break with a 42-23 lead.

Out of the break, Kia Nurse took command. She scored seven of the Huskies’ first 10 points in the second half en route to 14 points on 6-of-10 shooting. After dealing with an ankle injury, Nurse looked to be moving better after a few days of rest.

After a rough first half where she shot 3-of-14 and scored just six points, Katie Lou Samuelson wouldn’t stay cold for long. She bounced back with 10 points in the third quarter on 5-of-6 shooting.

“Every time Lou misses a shot [assistant coach Shea Ralph] loses her mind because it’s just unthinkable,” said Auriemma. “So we’ll try and talk her off the ledge after this performance.”

Samuelson would finish with 16 on the night but failed to make a three-pointer, going 0-of-7 from deep. It was the first time Samuelson did not hit from deep in 35 games, with the last time coming on Valentine’s Day last year.

Gabby Williams also put together a stronger performance in the second half. The junior finished with 10 points, six assists, six rebounds and six steals.

Crystal Dangerfield returned to full action for the first time since injuring her foot and put together a six point, six assist performance. She dropped a few dimes that showed off her impressive court vision and passing ability that made her such a highly touted recruit. It was good to see from her after getting ripped to shreds by Geno Auriemma at practice on Friday.

“She made some great plays today,” said Auriemma. “She was involved, she impacted the game and I think when you have that kind of ability and you’re able to do a lot of things, then I expect you to do a lot of things on the floor and you saw a little bit of that today.”

The memories of a bad first half were quickly washed away with a strong finish to the third quarter. The Huskies went on a 12-0 run and the reserves held Tulsa scoreless for over five minutes in the final quarter to push the lead over 50. In the end, UConn still came away with a 96-50 victory for their 97th in a row.

The Huskies have a quick turnaround to their next game as they head to Cincinnati on Tuesday. Tip-off is at 7 p.m. at Fifth Third Arena.