UConn Men’s Hockey Comes Up Short At No. 11 Providence

The second period onslaught by Providence proved too much for the Huskies.

Share All sharing options for: UConn Men’s Hockey Comes Up Short At No. 11 Providence

UConn Men’s Hockey came up short on the road against the No. 11 Providence Friars on Friday night, taking a 4-3 loss in a game that did not feel that close.

Brian Morgan scored two goals for the Huskies, while Spencer Naas added his 14th of the year. Tage Thompson had two assists.

Despite the dominance shown by Providence, especially in the second period, the Huskies actually had long stretches in the offensive zone in the first 20 minutes and the Friars didn’t take a lead until it was 3-2. 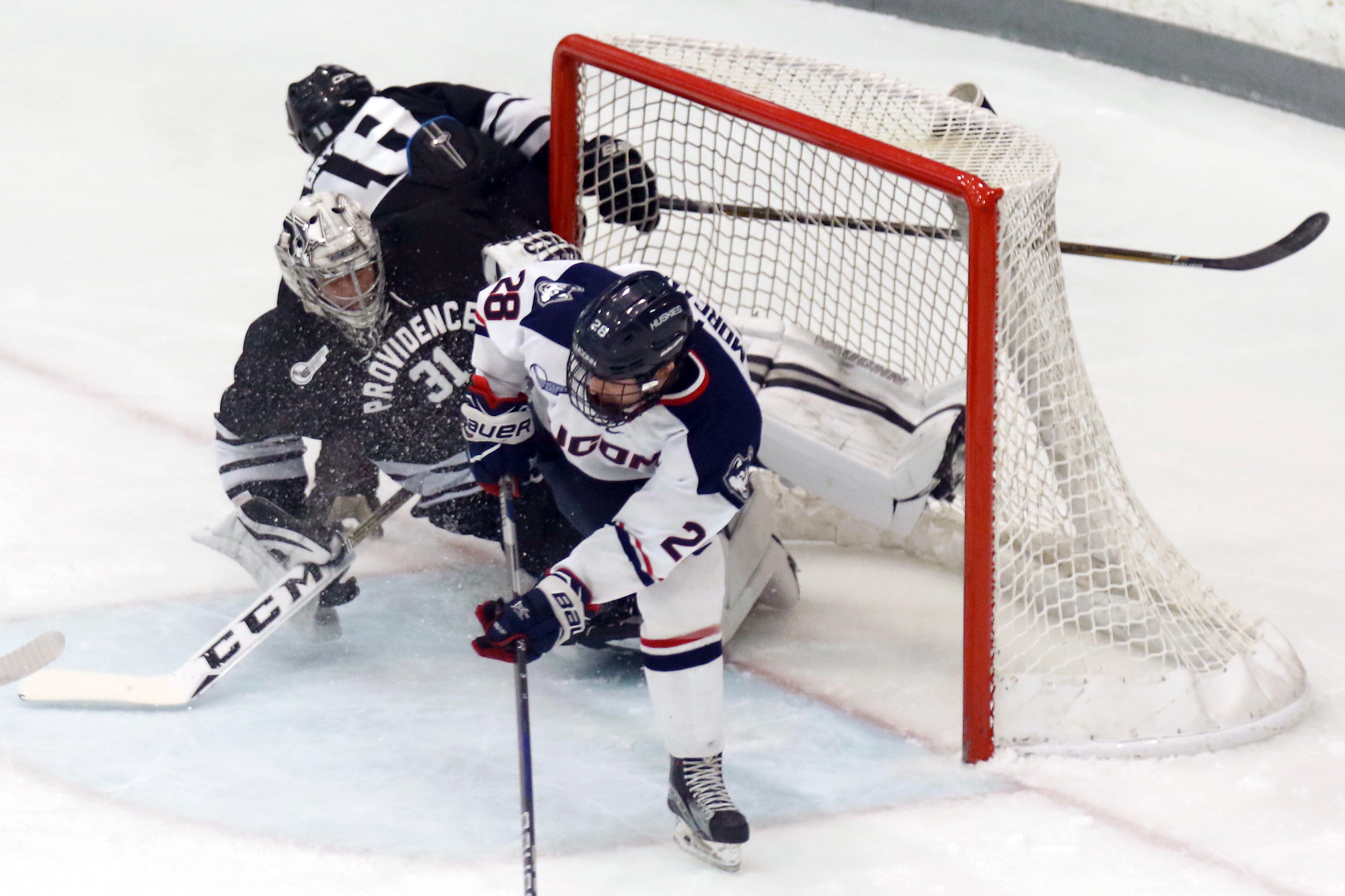 UConn kicked off the scoring off the stick of Morgan. He took the puck down the left side and forced the puck under Hayden Hawkey 6:20 into the contest for a 1-0 UConn lead.

“I didn’t even know it went in,” Morgan said. “I was told it went in by my line-mates that it went in, so I was a little shocked. I guess when I drove the net, I slid it under him.”

Just over two-and-a-half minutes later, Providence had it tied.

Erik Foley broke behind the defense and while Nichols made the initial save, he couldn’t deaden the rebound and he was able to slide the deflection home to ensure the No. 11 team in the nation would leave the first period tied.

The first period was fairly even, but the second period was anything but.

Naas scored for UConn 29 seconds into the period from below the left circle after a long pass from Tage Thompson, but that was literally the only offense the Huskies had.

“They were applying a lot of pressure,” Cavanaugh said. “ We were having trouble getting the puck out of the zone.”

The first of a pair of goals for the Friars in the middle 20 minutes came on a weird bounce off the end boards.

Foley threw the puck intentionally wide from the point and 4:05 into the period, Brian Pinho shoved the puck by Nichols to tie the game.

The Huskies weathered the storm for 10 more minutes before Providence took the lead for the first time.

Foley scored his second of the night on a wraparound. It was initially ruled no goal, but at the next whistle, the referees looked at it and the clock was wound back as the puck had in fact gone in the net.

The period ended with Providence leading 3-2 and despite the onslaught Nichols faced, UConn still had a chance to win.

That prospect got greater 7:42 into the final period at Schneider Arena.

Brian Morgan took feeds from Tage Thompson and Jospeh Masonius and shot a backhander by Hawkey to tie the game up.

The momentum got more in UConn’s favor when, with 9:11 left, Nichols stopped Josh Wilkins on a penalty shot.

“It gives us a little of confidence,” Nichols said. “Any time someone makes a big play, especially towards the end of the game, it gives us morale.”

However, a little more than two minutes later, Foley completed his hat-trick on a scrum in front of the net and Providence had a 4-3 lead they would not surrender.