UConn’s Jesse Schwartz found the back of the next for the third time in two games.

On Saturday, UConn men’s hockey drew with the No. 17 Ohio State Buckeyes at the XL Center by a score of 1-1.

Jesse Schwartz got his third goal of the year, while Adam Huska made 24 saves.

As exciting as the game was on Friday night, the first period was the complete opposite. Shots were just 6-to-5 in favor of Ohio State and each team was able to generate just one shot each across two power plays per squad. 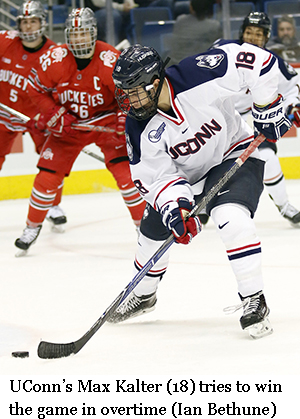 Max Kalter got the only solid chance when he was stopped by Sean Romeo from in close on the left side in the final two minutes.

In the 20 minutes that followed, the game opened up, with the Buckeyes taking 12 shots to the Huskies’ 11, but the goaltenders remained perfect.

UConn spotted the Buckeyes two penalties and Ohio State used them to gain momentum and out-attempt the Huskies 30-to-18, including a Mason Jobst shot that beat Huska but deflected off the post and out.

The Huskies held Ohio State to an 0-for-4 night on the power play, including 0-for-2 in the middle period.

“I thought [the penalty kill] was sharp tonight,” Cavanaugh said. “As much as they had the puck, we did a great job blocking shots.”

Seconds after the end of UConn’s second trip to the penalty box, it seemed as though Tanner Laczynski had broken the tie when he took a pass just below the left face-off dot and beat a terribly out of position Huska. However, the play was reviewed and was overturned for goaltender interference.

In the third, Ohio State continued their run of strong play before UConn was able to come back and finish regulation as the aggressor and both sides scored to send the contest to over time.

The Buckeyes started the scoring at 9:23 when Laczynski was able to get his goal. He took a snap shot from the top of the left circle and beat Huska high to the glove side for the lead.

“We were resilient. I really liked our mental toughness all weekend,” Cavanaugh said. “We found a way to tie the game.”

Shots were 8-to-5 in favor of the Huskies and the most important one came at 16:41 of the period to beat Romeo. Adam Karashik came hard down the left side on a net drive and stopped level with the goal line, just outside the crease. He spun and slid the puck through the slot to Schwartz, who registered his third goal in two games.

“It’s great,” Schwartz said. “I think it was a matter of me just plugging away.”

In overtime, the Huskies put six shots on net to Ohio State’s two, but neither team could score.