As hard as Luke Gatti tried to change UConn's reputation, there's one thing the school is known for above all else on a national stage: basketball. To be more specific, the kind of basketball that wins 14 national championships in 20 years. And for fans, that kind of basketball latches onto your soul over time. You get to know each player as a person, to the point where you go just as crazy when Pat Lenahan hits a three in garbage time against USF as you do when he wins a Goldwater scholarship. Each year brings new stories of glory, new "you had to be there" games, new memories where Gampel or XL brings ten thousand (minimum) screaming people to their feet. And there's a little part of you that can't help but want to be out there on the court.

We can all be proud of our alma mater, but only a select few get to fight for the achievements filling its trophy rooms, and it's easy to dream yourself up on the Husky-emblazoned hardwood. (And trust me, I was on Gampel's court three times as a student and almost got arrested for trespassing when I went back for a fourth. Once you're there, you want to go back.)

Thankfully, 2K Sports knows this feeling. A newly-revamped career feature in "NBA 2K16" allows users to play college ball in a UConn uniform. Unfortunately, it's nowhere near perfect - there are a few "man, that's cool" moments, but nothing there is enough to give you chills. Let's face it, though. If you're reading this, there's a good chance you're never going to be a walk-on, so you're gonna have to live with it.

Well, buying a copy of NCAA Basketball ‘10 or College Hoops 2K8 for the 360 would be the next best thing, but I only have an Xbox One and a Wii U, and those games go for $18 used minimum on Amazon anyway, so work with me here.

A note before we continue: For the past several years, 2K has hired big names - LeBron, Jay-Z, Michael Jordan, Pharrell - to attach their names to "2K" games, mostly by having them curate the soundtrack. (Jordan got a special mode in "2K13" where you could replay historic games in his career.) Following this trend, "2K16" got Spike Lee, the guy who made "Do The Right Thing," to write a plot for MyCareer. Yeah, that Spike Lee. 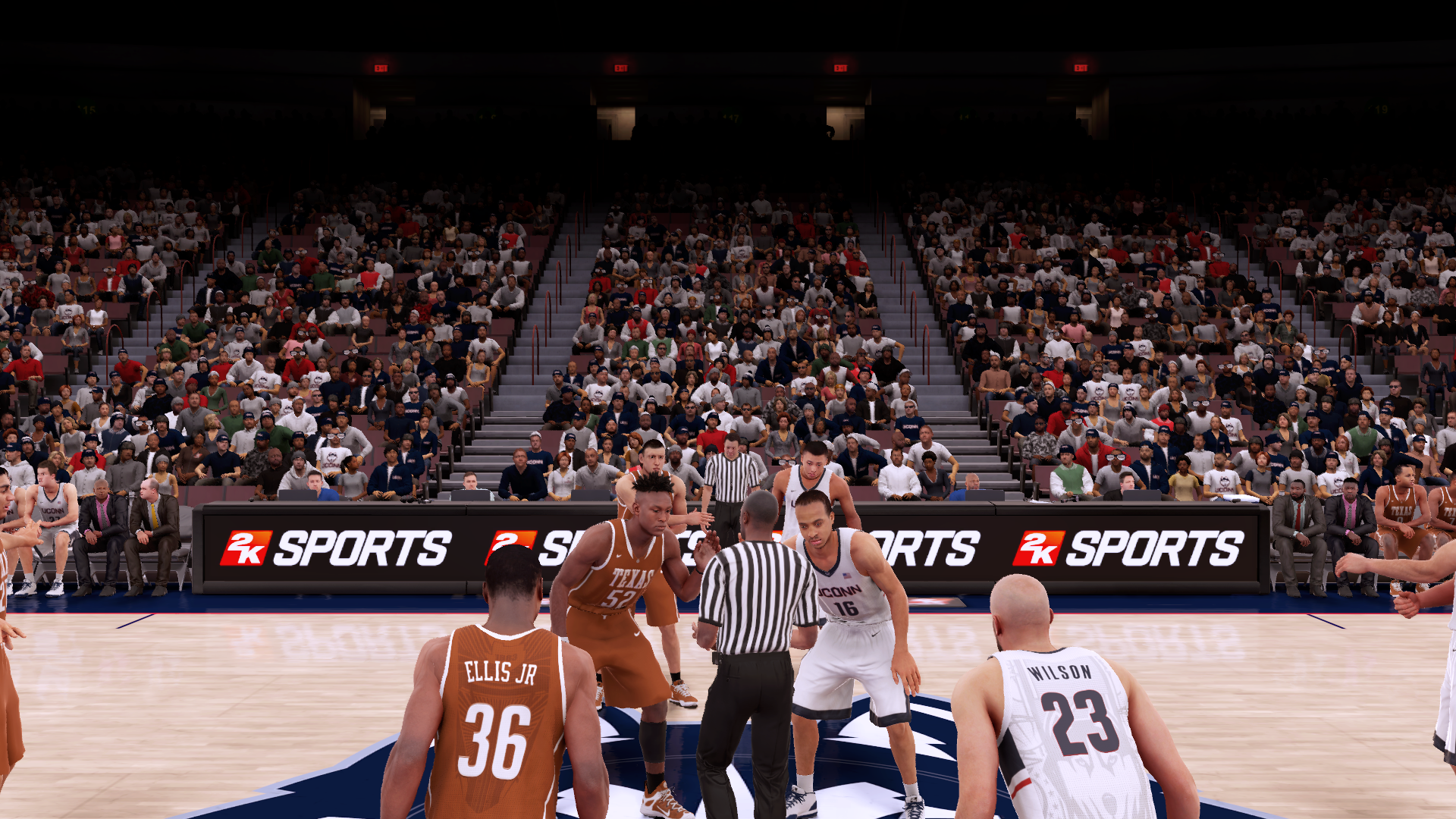 His efforts are... not great. Actually, they're flat-out terrible, and not just because the concept's hackeneyed, the dialogue's terrible and the acting's wooden. The story mode fails for several reasons - it extends the most boring part of MyCareer, as you can't improve your character for several hours after starting. It forces you into a streamlined experience with only a few options to toggle. And, worst, it homogenizes the college basketball experience.

Basically, your character is an All-American prospect from the projects who leads his school to a state championship. As such, he's heavily recruited by nine schools, presumably the nine schools whose rights were available - Georgetown, Texas, Villanova, Wisconsin and UCLA among them.

If you guessed UConn would also be one of those nine, my writing has been extremely obvious up to this point. Congratulations, now you're at the point where I talk about UConn! I do have to say the Huskies come off extremely well in-game. Of the nine offers you get - you play three games as a high schooler, receive three offers per game and finally pick your school after you finish the last one - most of their sells are based around their schools' reputations, and the experiences they offer. Conversely, the UConn recruiter doesn't jerk you around. Obviously, anyone with a brain is going to pick the guy who just says "Caron Butler, Rudy Gay, Kemba Walker, Shabazz Napier" and tells you to fill in the blanks. That's a compelling argument, IMO.

I'm only sort of lying when I say that getting to commit to the University of Connecticut for a second time was almost as emotional as doing it the first time. That might have been because I had a few beers before I started up the game, but I digress. The recruiter even mentions Bleed Blue! That's on-brand and @UConnTrademark should be proud.

The commitment scene during the story is pretty fun, even past Spike's lame dialogue - it's you and your fictional family celebrating while holding up UConn hats and a UConn jersey. Your fictional dad even makes a horrible dad joke about "getting a little Husky." One loading screen later, the band is blasting "UConn Husky" as you step out on the court in that familiar white uniform.

Which would be really rad, if not for the fact that you're going to hear "UConn Husky" eight times per game, and that's really the only custom UConn moment you'll recognize. When it came to personalizing the experience, the buck stopped really, really early. There are no familiar chants, no recognizable songs, nothing that even remotely makes the experience very close to a real basketball game on TV.

Joining my first game as UConn's latest high-profile shooting guard recruit, the experience was fun, but I couldn't help but be disappointed when the arena loaded to see it looked nothing like Gampel Pavilion or the XL Center. If you squint, you can kind of see a slight resemblance to the latter, but 2K's best attempt at recreating UConn's arena looks like XL and PAWSARF had a baby. On pure presentation, you can drink in enough of the game's college experience to overlook the flaws. At least the Husky logos everywhere are eye-pleasing.

As a college player, you get four full games in a UConn uniform. The first is your first freshman game, where you come in as a big-name recruit. A loading screen says you're expected to be a top-5 one-and-done, which is unrealistic, as no Kevin Ollie team would ever have such a player. And... that's it. Nothing really changes if you win or lose each game, as you're trapped on Mr. Lee's Wild Ride. You're a heralded recruit, then you're struggling, then you overcome adversity and your team goes far in the postseason, but you aren't allowed to control your destiny no matter what you do. I went 1-3 as UConn, only managing to upset Texas on UConn's "home floor," and yet my character stayed in the lottery conversation and the team made it to the Final Four despite a 40 percent shooting rate and no real success.

While the final game you play is the national championship (against last year's finalist Badgers, complete with Dekker and Kaminsky), it's really generic and disappointing. They didn't get the rights to anything NCAA-controlled, though it's understandable why, so it's generic as all hell, and the in-game presentation doesn't even change. You even play at the fictional UConn arena created in-game instead of, you know, any of the 32 actual basketball arenas in-game. 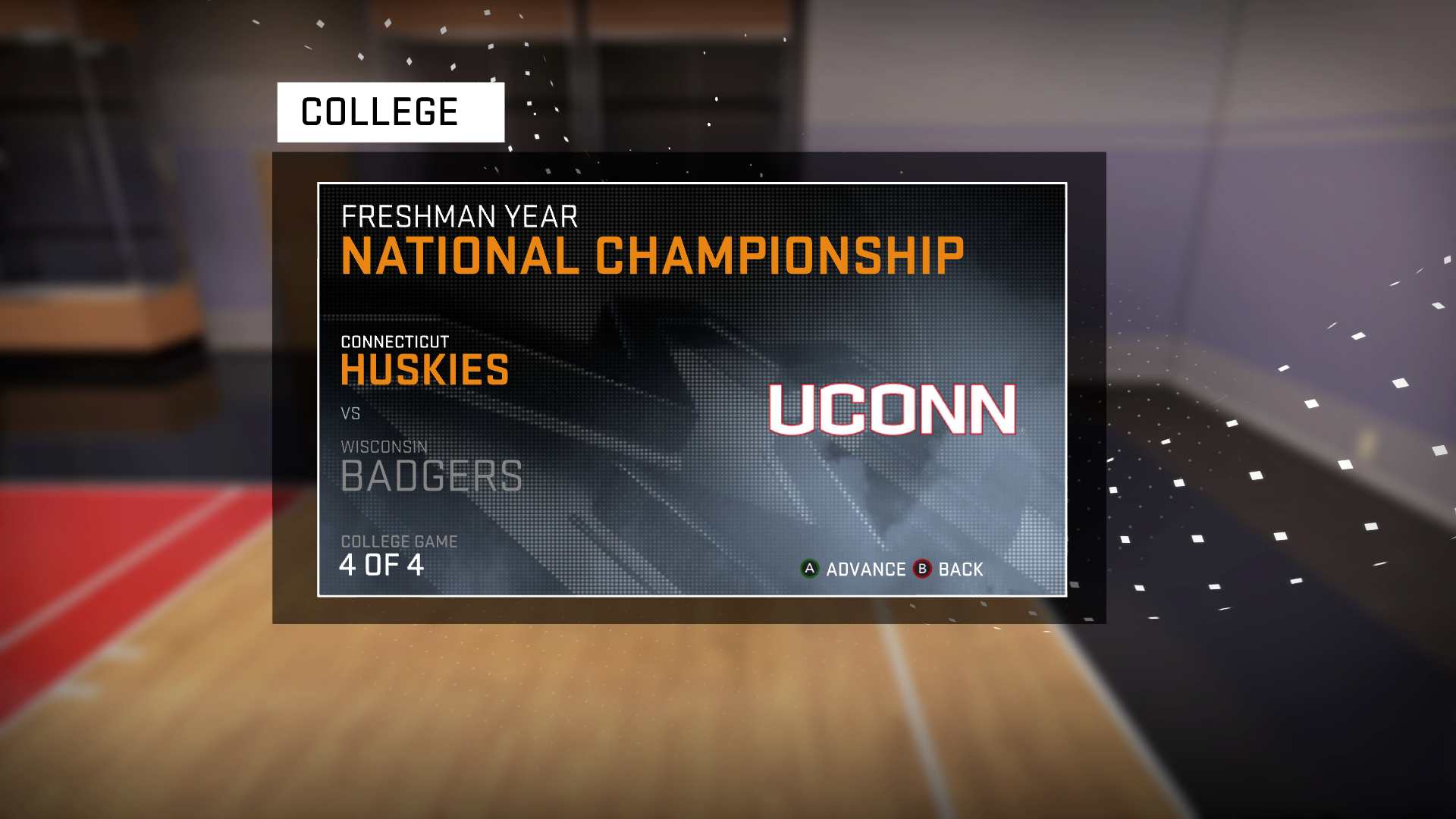 Spoiler: UConn lost horribly, because I am bad at video games.

The college "game," further, is no different than a normal match. The AI gets stupid-good and stupid-bad at times and if you don't play hero ball you're not going to stand a chance. So... typical MyCareer, then.

The new Jonathan the Husky, the one that wouldn't look out of place at a furry convention and has a piercing stare that is increasingly unsettling, makes an appearance, though, so... yay for that, I guess?

It's hard to not be disappointed by 2K's supposedly-triumphant return to the world of college ball. I know the O'Bannon lawsuit put the kibosh on any actual player likenesses being used - other than the 14-15 Badgers, teams are made up of randomized scrubs with last names of current NBA players - but only getting the schools' likenesses and one or two details before moving on makes the (fictional) college experience feel like an afterthought. If 2K can get the full NCAA rights back in the future, this mode could flourish in the future, either as a feature to expand upon or a precursor to the return of College Hoops. But for now, it's a tossed-off extra that's more of a novelty than anything remotely impressive.