A theme of Kevin Ollie's tenure as head coach has been hard work. After all, this is a man who takes the stairs because escalators are for cowards. Today, Ollie rewarded the hard work of Nnamdi Amilo with a scholarship for the coming season.

Amilo, who was a walk-on last year, is a junior who went to Avon Old Farms high school in Connecticut. He appeared in two games last season, scoring two points and grabbing two rebounds. He is listed as a forward, at only 6-foot-2, but Amilo is actually known for his ability to practice competitively with the other UConn big men.

Amilo not only represents the university on the basketball team, but serves as a leader on campus. He is a Resident Adviser and a good student as well. As a molecular/cell biology major he plans to have a career in medicine following his days as a Husky. 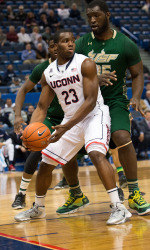 In a press release, coach Kevin Ollie said "Nnamdi is a terrific young man who we're proud to have as a part of our family. He's a hard worker on the court, doing whatever we need him to do to make his teammates better, he's an outstanding student in the classroom, and he's a young man of the highest character. I'm happy to be able to give him a scholarship."

With this addition, Ollie now has 12 scholarship players on the roster after giving a scholarship to Pat Lenehan earlier this summer.