It was announced Wednesday that UConn has reached an agreement to play home-and-home series with Ohio State and Arizona over a four year period.

UConn will take on Ohio State in Connecticut in 2015. In 2016, the teams will meet in Columbus. Both games are scheduled for dates in December. The Huskies and Buckeyes last met in the National Semifinal in 1999, with UConn winning 64-58 on their way to capturing their first NCAA Championship. Ohio State holds the all-time series lead at 3-2.

Later in the decade, the Huskies will tangle with Wildcats in another strong non-conference schedule move. For these match-ups, Arizona will host UConn in 2017-18 at the McKale Center and will return the game in Connecticut the following season. UConn has dominated this match-up, holding a 5-0 advantage. Their last meeting was in the 2011 Elite Eight, with the Huskies pulling out a 65-63 victory en route to the third NCAA Championship in program history. 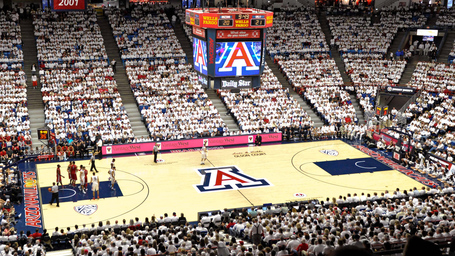 This is an inspired, clever scheduling move by the UConn Athletic Department. Adding two power programs from major conferences, the Big 10 and Pac 12, is a bold step. There have been concerns over UConn's future staying power while staying in AAC. In it's current iteration, the NCAA Tournament Committee sees the American Athletic Conference as a mid-major. Despite finishing with a 24-7 record in the regular season, the Huskies were selected as a 7 seed. Regardless, they went on to win the tournament. UConn has taken strides to bolster their reputation by bulking up the out-of-conference portion of the schedule.

Over the next few seasons, UConn has scheduled a host of games with other big national programs. They will face Florida, Stanford, Texas and Duke this season and are in negotiations to reignite rivalries with old Big East foes; Syracuse, Georgetown, Villanova and/or St. John's.