Can Shabazz Save the Heat?

How will Shabazz Napier fit with the Miami Heat in the post LeBron world?

Share All sharing options for: Can Shabazz Save the Heat?

It started with a series of tweets. LeBron James, then of the Miami Heat, proclaimed Shabazz Napier was the best point guard in the draft. Many around the league speculated that Miami would do whatever it took to get Napier, as a way of persuading James to staying. On draft night, the Charlotte Hornets selected Shabazz Napier, then quickly traded him to the Heat, in the process ruining the dreams of many UConn fans hoping to see Kemba Walker and Shabazz partner up again.

With Napier in hand, the Heat began retooling their roster in hopes of resigning LeBron. They acquired forwards Josh McRoberts and Danny Granger, two useful veteran pieces. However, the allure of winning a 5th straight Eastern Conference while in South Beach could not top the youthful optimism that is emanating out of Cleveland. LeBron James chose to go back to his home and sign with the Cavaliers. So, where does that leave the Napier and the Heat? 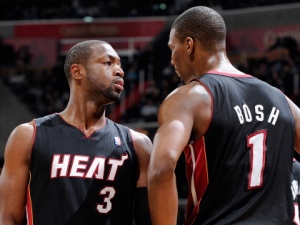 Miami is coming off a disappointing Finals loss to the San Antonio Spurs and have lost the best player in the league in free agency. No matter how you slice it, these last two months have been bad. Yet, hope remains. Speculation around the league had Chris Bosh bolting South Beach to join the Houston Rockets as soon as LeBron fled the scene. However, that was not the case. Instead, Bosh signed for a max deal to stay with the Heat. It's been lost over the last four years just how good of a player Chris Bosh is. During his time with the Toronto Raptors as the number one option, Bosh averaged 20.2 PPG, 9.4 RPG and had a PER of 21.3. He has been named to the All Star team the last nine straight seasons. Chris Bosh is a tremendous basketball player, and is more than capable of being the top gun on a team contending for a playoff spot.

The onus on the Heat's success, though, lies on the knees of Dwyane Wade. When the Big 3 got together in 2010, Wade was amongst the top players in the league. These last four seasons, each ending in the NBA Finals, have taken a significant toll on his body. He has missed 64 games in the previous four seasons, 28 in just 2013-14 alone. Anyone who watched the NBA Finals can see that Wade's days as an All-NBA caliber guard are over. He must find a way to reinvent himself. I actually think LeBron leaving will be just the motivation Wade needed. He must get into the gym, work on his three point range, get in shape and come into the season determined to stay healthy. Already a first ballot Hall of Famer, if Wade can keep Miami in contention even after losing LeBron James, his legacy will only be burnished further.

Miami will incorporate several new faces this season. One notable acquisition was Josh McRoberts, a jump shooting stretch 4. He will contribute much needed floor spacing and has grown to be a deft and clever passer. Also, Luol Deng was brought in to be the starting small forward, replacing LeBron James. Deng's strength lies in his defensive intensity, something Erik Spoelstra will love tremendously. Danny Granger was signed as a backup forward, another solid defender and three point shooter. He struggled with the Clippers last season, but he's on a cheap contract. The new piece that could be the difference for the Heat this season, and for the future, is former UConn PG Shabazz Napier. Napier, a two time National Champion, was brought in on a draft night trade with the Hornets. Although the Heat resigned Mario Chalmers and have Norris Cole on the roster already, look for Napier to compete immediately for minutes. Personally, I think it's foolish to expect Napier to perform the way he did at UConn. He will not be number one option on this team this season, but I fully expect him to have that same attitude. The Heat have championship aspirations, whether that is warranted remains to be seen. Napier has that same drive. His will, character and persistence helped fuel UConn's run to the championship in 2014. Not to mention, he is a knockdown three point shooter, over 40%, and creator, with 4.8 assists per game. I imagine Napier beginning the season in a backup capacity, but I would not be surprised to see him win the starting job by the time the season is over. 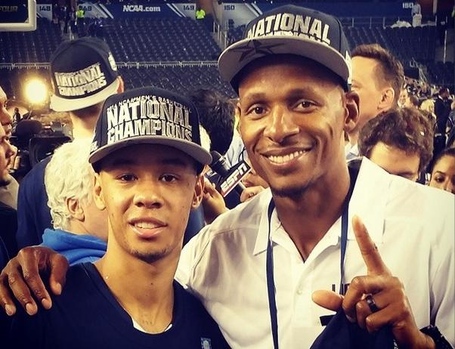 This revamped Miami Heat team, without LeBron James, possibly without Ray Allen as well, still looks to be in playoff contention. The Eastern Conference, much maligned a season ago, looks to be much improved, with the Cavaliers, Knicks, and Pistons all improving in the offseason. I project the Heat to make the playoffs, but in the lower half of the bracket. The talent on the floor, with Spoelstra on the sidelines, should be enough to advance into spring basketball. And hey, when you have Shabazz Napier on your team, magical things can happen once you get there.