Yes folks, the year is 2014 and you can now watch college arm wrestling on national television.

Share All sharing options for: The Next Big College Sport: Arm Wrestling

On Tuesday, May 13th, students from Penn State University faced a nefarious bunch from Rutgers in a battle of athleticism, wit and brute strength. In front of the entire country, or on ESPNU at least, the College Arm Wrestling League held it's first match and our country's next great college sport was born.

The team from Rutgers prevailed, 80-30. Rutgers, winners of the first intercollegiate football game, finally has some news from it's athletic department that it can be proud of- probably for the first time since that college football game in 1869.

The College Arm Wrestling League's inaugural season will be played in the form of a four-team, single-elimination tournament. Rutgers beat Penn State on one side of the bracket and on the other side...

UConn versus Syracuse! A rivalry renewed! Tonight, at 7pm on ESPNU, Connecticut takes on Syracuse with everything on the line: continued national exposure, pride and a chance to publicly humiliate Rutgers. What else could you ask for?

Reasons why the CAWL is a virtual lock to succeed:

UConn's prestigious position as a founding member of the CAWL will only further our national profile and is sure to help us gain entry into the Power 5. My sources are telling me that the next TV deal is expected to break records.

You can check out the league's official website for more information including a little bit more about the honorable young men and women representing the University of Connecticut on the... table? We'll have an open thread for it later tonight featuring an interview with the team captain! 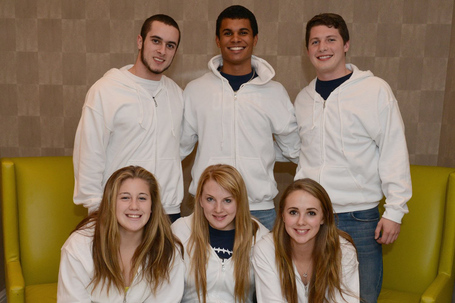