On a cold, rainy day in Storrs, the University of Connecticut's men's basketball team participated in their annual Husky Run event.

Amida Brimah, the sophomore center, was the first player to finish the race, at 20 minutes and 22 seconds.

Coach Kevin Ollie was impressed with the performance of Brimah.

"That's probably the first time a big guy's won the Husky Run. We're going to have to check the archives, I gotta ask Coach (Jim Calhoun) about that. For (Brimah) to do that, is astounding," Ollie said.

Brimah, a sophomore center, was the talk of the event, having won the race and the announcement that he has been named captain.

"I've been working hard this summer to prove to Coach I can be a leader. I'm always trying to work, trying to get better" he said.

Ryan Boatright, also a captain, had praise for Brimah.

"It wasn't a surprise. He's from Africa, they do that running over there. He can run for hours. It may be a surprise for the public, but not for us," he said jokingly. He went on to discuss Brimah's improved game "In practice, he's got a consistent, everyday knockdown 15 foot jumper. He's catching every ball. Last year, we'd throw him passes, he'd fumble it, but he catches every ball now. He's a force on the defensive end."

The Husky Run has been a long standing UConn tradition, where players run alongside their fellow students. It is the symbolic beginning of preseason practices.

In last year's event, DeAndre Daniels won the race, finishing a step ahead of former walk-on, now scholarship player, Pat Lenehan. Lenehan was the projected favorite to win the race, but a foot injury kept him on the sidelines.

"i'd win if I ran it, that's for sure," he said boastfully with a smile. "If I had to pick anyone to win today, besides me, it'd be Boat or Facey."

At 2:30 p.m., the group of over 60 runners began the race. A surprise guest ran amongst them; Coach Kevin Ollie.

Afterwards, Boatright discussed what it meant for Ollie to run with the team. 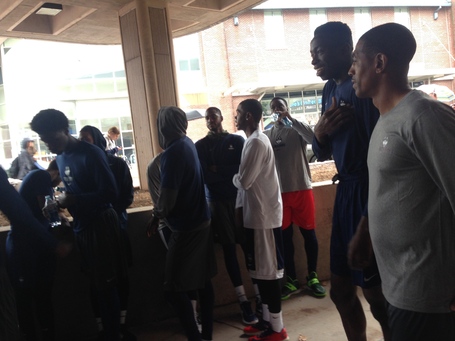 The overall winner of the race was John Gill a junior from Lyman Hall High in Wallingford. finishing with a time of 18:30. He won a Nike UConn sweatsuit. The other participants were given a complimentary Husky Run t shirt.