We came. We saw. We left. We cried like girls. But last Saturday in Storrs, we still managed to have a great time and somehow leave with an even better story.

Share All sharing options for: UConn-Louisville: A running diary

The very best thing about college sports is that it (whatever "it" is) is never solely about the game itself.

Fans, players and coaches alike will tell you about these things all the time. They'll acknowledge the in-game atmosphere, the crowd noise, the pregame tailgating, the post-game sharing of whatever contagious, extreme feeling there was to endure upon the final result, the camaraderie, the history, the tradition, the drama, the whatever-you-darn-well-please.

Thankfully, this held true last Saturday night when Louisville noogie-ed UConn in its own building, 76-64. We don't need to analyze the 40 minutes of basketball game here anymore in further, painful detail. You either watched the game on TV, heard about it or, like us, witnessed it in person.

And that's where this piece comes in.

Today, we give you a lighthearted look back on the night that was disappointing on the court, but an undeniable blast in the stands and outside. For, Saturday was more than 76-64. It was ESPN's Gameday on campus, a top-20 opponent in town, the start of a new semester, a blue-out, a reason to see old friends, an unofficial alumni party at Ted's and Thirsty's and on and on and on.

Here's to you, college basketball.

The Pregame to Pregame

5:47 PM After meeting up with Mac, Andrew Porter and some old friends, I've finally decided that a trek back to the actual bar should be made.

5:55 PM Eight minutes have gone by, and I've moved eight feet. I swear the mounted deer on the far wall just winked at me twice. Stir crazy? Nah. Though, there are definitely more bows being thrown in here than there will be in the paint tonight.

5:58 PM Well, shout-out to my friend Rachel Bentivegna. Following a quick embrace, she's offered to get my two Bud Lights, and soon, they magically appear. How? Some rich guy is buying everyone's drinks (though only those with long hair and pretty smiles I'm sure need apply). A mystery, Husky sugar daddy of sorts. Don't know him, but I love that guy.

6:05 PM Life law: Everyone thinks they know the words to Billy Joel's Piano Man. They don't.

6:22 PM Half-eaten cheesy fries continue to linger on the other half of our table, which is occupied by some girls we don't know. Ladies, either eat those delicious, teasing treats or take them away from me. This is insufferable.

6:26 PM IGNITION IS PLAYING, AND ALL IS RIGHT WITH THE WORLD!

6:29 PM The first "UConn! Huskies!" chant breaks out, and everyone is hollering. What took us so long?

6:38 PM Back to the bar, and I can't find Rachel to further bum off of this mystery sugar daddy. So, we go it alone. Amongst the best 1,000,001 things this world has to offer, spending four dollars for one Bud Light is not one of them.

6:45 PM In case you were wondering, the game where you avoid eye contact with someone you recognize, but don't know, from a big lecture class still applies two years after the class ends. I (don't) see you over there, blondie with the nose ring.

6:48 PM "Don't Stop Believing" is now blaring. Bring back those people who don't know the words to Piano Man. It's their time to shine again.

7:14 PM Leaving Ted's, and the best idea in the UNIVERSE hits me. Start a "Ted's second floor" fund. Yes, because the place is always packed, but also that would be nothing shy of amazing.

7:50 PM Now with some different friends, I house some Subway before the game. And you bet the five dollar foot-long innuendo is being put to exhaustive use.

8:16 PM Strolling through Gampel, and oooooh does Big Red has his gameface on. That is a man's man, right there. 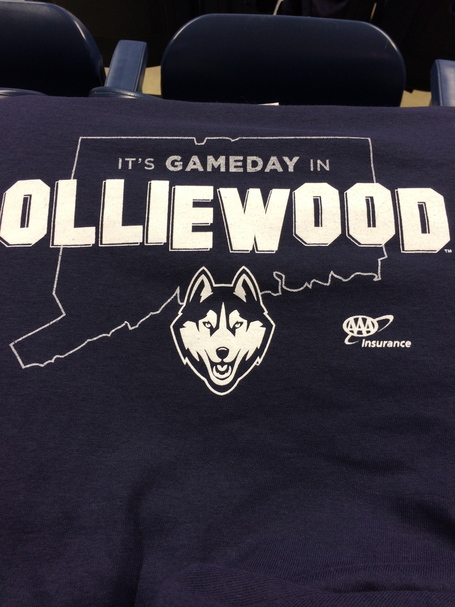 8:18 PM Okay, so clearly having Dicky V in the house is already taking an effect on me. Though, you know, I think I'm okay with that.

8:27 PM Speak of the handsome devil, Dicky makes an appearance to the delight of the student section. What percentage of that guy's blood consists of Red Bull?

Sorry, Louisville just came onto the floor. 25 minutes until tip.

8:38 PM Apparently, the Cardinals had a priest travel with them, and he is now standing on their sideline. Good. They're going to need him tonight.

8:43 PM Fact: If you are wearing even a thread of Cardinal red tonight, you are getting flipped off by 25 percent of the male population in the student section.

8:45 PM Gampel is almost entirely decked out in blue. I am surprisingly impressed and so in love with my school. Tonight, we will ALL bleed, and profusely sweat, blue. 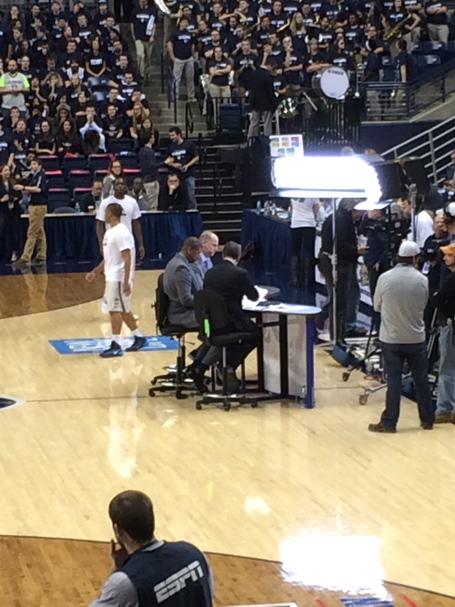 8:54 PM The crowd sings along for the last few lyrics of the national anthem. Boy, do I love it when they do that. Chilling stuff.

Good job, you magnificent, slightly immature and totally lovable piece of our future.

8:59 PM An older gentleman in my row has the look of "I'm going to make you get up and make you move for me at least four different times during this game because I refuse to undergo a regular prostate check-up like any man my age should. And I'm not sorry."

Can't wait for that. 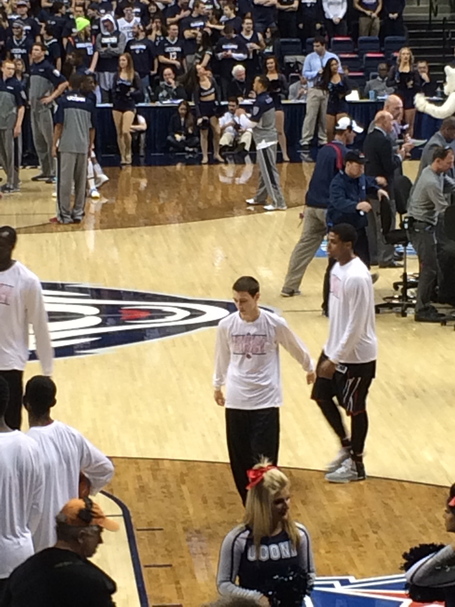 9:03 PM I HAVE NEVER BEEN HAPPIER TO HAVE MY HEARING PERMANENTLY IMPAIRED IN MY ENTIRE LIFE!

9:04 PM As we wait for ESPN to return from commercial, Russ Smith shares a casual chat with the nearby referee. 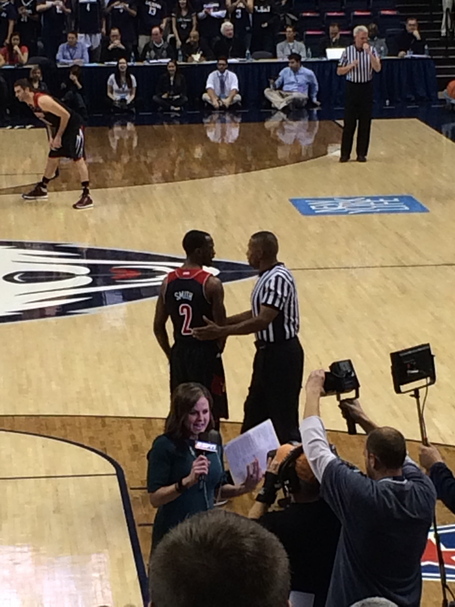 Ref: "You know, still a bit immature and a little wild. How's the shot selection?" 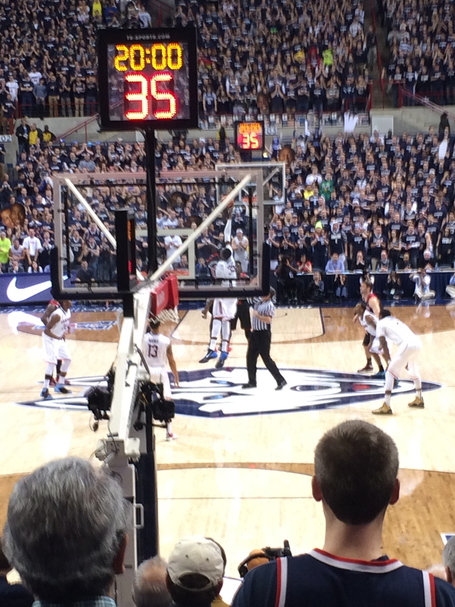 9:11 PM When in Storrs, do as Jim Calhoun does. Pitino takes a reactionary timeout in the first few minutes. In other news, Lasan Kromah is a wonderful thief.

9:14 PM A couple UConn threes fall easily, but Daniels misfires on a monstrous dunk. And that's probably a good thing, because the ensuing noise would've blown Gampel's roof. It's 12-11 Louisville at the first media timeout. 14:39 to go.

9:18 PM Donny Marshall is shown up on the scoreboard with his daughter ... I thought it was his girlfriend. *facepalm*

I'm going to spin this that Donny just looks very young for his age.

9:20 PM Montrezl Harrell is doing damage inside on both ends of the floor. Stop that man.

9:24 PM Calhoun and Nolan combine for a Bad News Bears-like possession, Blackshear swishes a three at the other end aaaaand Kevin Ollie calls timeout. 19-13 Louisville at 11:57 before halftime.

9:28 PM At the second media timeout, new football coach Bob Diaco is handed a microphone. Attention UConn: This is something you should figure out a way to do every, single day he is an employee. Anyways, before leading the crowd in a cheer, he promises "awesome things" in the future like "a pizza party". Love the man so far, but doesn't this strike anyone else as a little middle school?

9:30 PM Russ Smith is now out, which puts Napier on Luke Hancock. I like this, because clearly Hancock does not. UConn's down eight with eleven minutes left.

9:33 PM Montrezl Harrell could've been charged with assaulting a minor in the paint, as he stops the UConn run. 23-20 Louisville with eight minutes to go.

Bad: The ‘Ville is shooting 50 percent and out-rebounding the Huskies 14-9.

9:37 PM UConn leaving its feet too much on defense. House of Pain would be proud.

9:40 PM Huskies have gone cold the last few minutes and now less than five remain on the first half clock. Louisville 25-20. #ugh

9:41 PM Aaaaaand Boatright gets to the line! Gold star for you, Ryan.

9:42 PM UConn continuing to fall for these upfakes like they're girls who look pretty in glasses. C'mon boooooys

9:53 PM Refs call an absolutely absurd foul against Kromah, which allows Hancock to knock down one of two freebies before the half ends. Cardinals are ahead, 34-28. 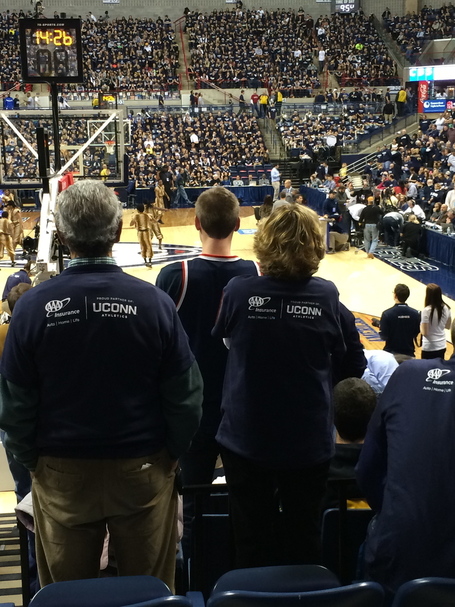 10:13 PM The second half is about to start. Harrell already has 15 points. Oh my Kemba. If he finishes with more than 24, I say UConn loses this game. Oh, and Boatright and Daniels have combined for 3 points. That's a real fact.

10:17 PM Timeout called. So, do you think the dance team and cheerleaders have it out for each other off the court? Like a real, passionate, mutual hatred? Or at least rivalry? Few things would make me happier than knowing that was true.

10:18 PM Hancock is awarded three points, but his foot was on the line. Somehow, everyone missed it except me. Not forgetting this.

10:23 PM Oooooh boy. Just like that, it's Louisville 42-34 at the first media timeout. Giffey's coming back into the game. Need some of that early-season blitzkrieg.

10:28 PM Son of a ... another Cardinal and-1 play, this time courtesy of Russ Smith. Hey kids, look what happens when you attack the basket. GOOD THINGS!

10:30 PM Aaaaaaay! Shabazz drives to the hoop twice and draws free throws on each trip. The captain cuts it to a seven-point lead with13:35 left.

10:31 PM Wave good-bye to any of your "momentum". Louisville cashes in on an easy-as-pie offensive putback. 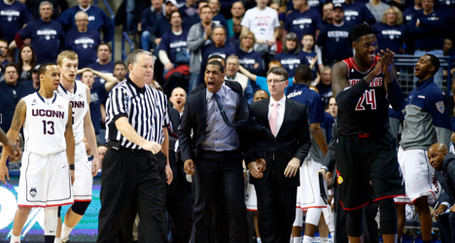 10:34 PM There are too many swear words flying around to document them all, from both old folks whose bedtime has already passed and drunk students whose buzz is wearing off. All you need to know is that the place is LIVID after Kevin Ollie got two technicals faster than you could say "Ref, you're acting more sensitively than a third grade girl".

10:35 PM Mission somewhat accomplished for Ollie. Huskies are playing with a lot more energy in the name of their lost coach. But, that doesn't solve the biggest issue of poor rim protection.

10:36 PM What is going on??? ANOTHER foul called against UConn. 52-38, Louisville. Get the feeling these refs will probably be told "hide ya kids, hide ya wife" upon getting outta town (still a topical enough reference? Yes? No?).

10:37 PM Second media timeout hits. Still don't believe what happened to Ollie. Meanwhile, UConn can't penetrate and no one besides Napier and Kromah is playing well. Where are Boatright, Daniels, Giffey, Brimah and Calhoun?!

10:54 PM Smart timeout by Miller after a made Boatright lay-up in traffic. Ryan has been resurrected, but the deficit won't shrink. 63-51 Cardinals with 5:54 on the clock.

10:58 PM Brimah tries to tip in a bouncing ball ... after Shabazz had been fouled on his shot attempt. Good golly. The freshman denies 'Bazz an and-1 opportunity. Then, the captain immediately picks up his fourth foul. C'mooooooooon.

11:05 PM Last media timeout, down 10. Regardless of the fouls, I don't know how Glen Miller doesn't have Shabazz in right now. When the team is down by double-digits with less than four minutes, you need your best player on the floor, ESPECIALLY when he has half your points already!

11:10 PM Brimah can't finish an alley-oop to force this into a two-score game. It's been that kind of night. 1:59 remaining, still down seven and Cardinals have the ball.

11:13 PM HE WAS PLAYING ETCH A SKETCH! Russ Smith turns it over! UConn ball!

11:14 PM Crap. Shabazz can't draw enough contact on his way to the hoop, misses a wild lay-in and that should be the game. Louisville to shoot free throws the rest of the way with less than a minute left.

See you next time, kids.