A film breakdown of UConn's final opponent in September, who has taken it to a top-10 team in each of the past two seasons.

Share All sharing options for: Buffalo: A scouting report

All the maize and blue talk is gone, and the Huskies are now about to close out the first third of their season on the road. After three opening kicks, UConn still stands without a win, albeit after a rather difficult slate of opponents. Next up is Buffalo, who currently resides at 1-2, following battles of their own against an even more trying three-game stretch: at Ohio State, at Baylor and home versus Stony Brook.

The most important thing to know about the Bulls is that they are much improved from the team UConn beat 24-17 at home a year ago, in one of the most bizarre, underwhelming games you’ll ever see. Their 2012 record reads at 4-8, though seven of those losses came against teams that ended their years with a bowl game (the Huskies serving as the lone exception). Most notably, Buffalo took it to no. 6 Georgia in the season opener, and then stayed within two scores until the fourth quarter.

To open 2013, the Bulls put forth a similar effort when they fell by a margin of just 40-20 against the no. 2 Buckeyes. Next, Baylor had its way with them down in Waco, but they then bounced back to down Stony Brook at home in five overtimes, 26-23. Mind you, those final two games were played largely without star running back Branden Oliver (1,395 rushing yards as a sophomore and a 5.5 yards per carry average a year ago).

Overall, Buffalo returns nearly every starter to a stout, physical team that’s competes very hard. Offensively, the Bulls are more or less a two-trick pony, but there is NFL quality talent on the defensive side of the ball. The Huskies can't afford to bring much less than their A-game to secure a convincing victory.

Buffalo coach Jeff Quinn is a former Brian Kelly understudy, so the structure of his offense is very similar to that of the current Notre Dame headman. The Bulls run a no-huddle spread, short passing attack with lots of bubble screens and quick throws to the outside from shotgun and pistol sets. However, this kind of ball-control passing game often works to set up deep shots downfield, which UConn has to stop in order to win. More on that later.

In contrast to their spread passing schemes, Buffalo will also go under center and run a more traditional power run game, particularly when its close to either end zone. This is designed to utilize the talents of the aforementioned Oliver. The senior, when healthy, has been very productive for the Bulls over his career, running well both between the tackles and to the outside. In his stead this season, the Bulls have deployed the young Antone Taylor. Taylor rushed for 118 yards and two scores a couple weeks ago against Stony Brook.

Now one year ago, the Bulls couldn’t run this kind of offense with quarterback Alex Zordich, who best operated when running in space. In 2013 however, they’re able to run Quinn’s favored Xs and Os thanks to the emergence of a more traditional drop back quarterback, Joe Licata. Licata, who started the team’s final four games of 2012, has lots of confidence in his strong arm and good mobility within the pocket. As with many young signal callers, his accuracy can fluctuate, but the ability to deliver strikes on target certainly is always there.

The receivers on the end of Licata’s passes are largely forgettable, with the exception of senior wideout Alex Neutz. At 6’ 3" 205 pounds, Neutz runs a full, impressive route tree and showcases great hands. He uses his strong frame to shield defenders on short routes, and long strides to get himself open deep. If Neutz is allowed to catch multiple balls far downfield, UConn is in trouble. The Bulls attacked Stony Brook deep early and often with the Grand Isalnd, N.Y. native, and when he couldn’t get to one of those passes, still managed to draw a bogus pass interference call.

This leads into the next bullet point on Neutz’s scouting report, which is that he is extremely crafty. Ultimately, he’s going to give any cornerback a run for his money with this total package. Buffalo opponents know Licata is going to throw in his direction (more than half the Bulls’ receiving yards are owned by Neutz), but the Bulls' leading receiver still gets the job done. Just ask Baylor— they allowed over 197 yards to the kid.

Opposite Neutz is South Carolina native Fred Lee, who is second on the team with 12 catches and 90 yards. Other pass catchers include tight ends Matt Weiser, Mason Shreck and Jimmy Gordon. Each stand at 6’ 5", while Weiser leads the bunch with 37 yards and a score.

Up front, the Bulls boast perhaps the largest offensive line UConn will see all season. All but one lineman tips the scales at 320 pounds or more, and left guard Jasen Carlson is the best of the bunch. Carlson and left tackle Andre Davis put up very impressive tape against Ohio State and later, cleared constant running space for Taylor during the Stony Brook game. The same cannot be said for the right side of the line. Tackle Jake Silas is the weak point here, and he has been attacked repeatedly by opponents. Right guard Dillon Guy can hold his own, though he's often troubled by the nearby struggles of Silas and junior center Trevor Sales.

UConn keys to success: As mentioned above, the Huskies cannot afford to get burned by deep balls to Neutz. If Neutz is held down, they win this ballgame running away. Oliver’s return is troublesome, but Shamar Stephen has been on a tear controlling the middle of opponents’ offensive lines. I’d expect a heavy dose of Cover 1 in this game, with man coverage across the board, a safety over the top to help on Neutz and a consistent blitzer (likely Smallwood) to stuff the run.

Get a good look at this picture. It’s known as Cover 8, and early on downs, the Bulls are absolutely in love with this call: 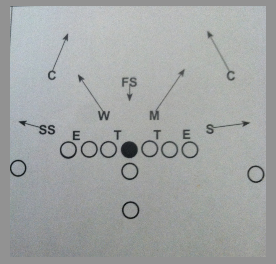 Next, get familiar with this name: Khalil Mack. Mack is a one man wrecking ball at outside linebacker, who very well could land on an All-American team by season’s end and most definitely will be a first round NFL draft pick next April. His physical tools and position attributes are off the charts: Speed, power, pass rush, tackling, technique, everything. To get a glimpse, check out his highlight reel from the Ohio State game, when he recorded 2.5 sacks and an interception return for a touchdown, in addition to nine tackles.

Not to mention, the Buffalo team captain is three forced fumbles away from owning the all-time NCAA record for most in a career.

Mack is a part of a 3-4 system that often deploys the same linemen up front, and a number of different linebackers that rotate in behind them. Nose tackle Kristjian Sokoli possesses a very strong bull rush, and is the best of all Buffalo defenders with their hand in the ground. Defensive end Colby Way notched seven sacks last season, but has only one to-date, just like the four other Bulls who are tied for second on the team in that category.

Opposite Mack in the Buffalo linebacking core is converted safety Adam Redden. Redden is currently listed as the team’s top tackler with 25 stops, though this is largely a product of teams running away from the superstar on the other side. Redden racked up 17 wrap-ups against Stony Brook. The inside ‘backers who see the most playing time are Blake Bean and Lee Skinner. Behind them are Jake Stockman and Nick Gilbo.

The secondary lines up two returning starters at cornerback, and a safety in Derek Brim, who is extremely active. Due to his "roving" assignment in the team’s common Cover 8 call (depicted above), Brim is allowed to fly in against runs and make plays on passes over the middle. The senior isn’t an overwhelming physical presence, but he’s certainly earned the right to start the team’s previous eight games. He patrols the back end with fellow senior Okoye Houston.

On the edges, Buffalo’s Najja Johnson is reported to perhaps be the best corner in all the Mid-Atlantic Conference. Johnson picked off five passes a year ago, and has already collected one this season. While Cortney Lester has yet to record an interception himself, he continues his third year as a starter at cornerback for the Bulls.

UConn keys to success: Get the hell away from Mack, and establish the run early. Above all else, the Huskies have to generate some rhythm in their offense and string together multiple successful drives. This will be made easiest with a balanced attack, something the Huskies have not had all year. A strong running game will also provide opportunities to hit the Bulls on some play-action passes, which Stony Brook had great success with.