Explaining how the UConn offense can get back on track and put up points against Maryland's attacking 3-4 defense.

After UConn’s opening loss to Towson, it was very easy to determine where you could point a finger at the defense.

Most went to the sideline, looking at the guys with the headsets. Others gestured to the front seven for not keeping run contain. Or, perhaps you shook a fist at the secondary for allowing critical big plays.

You were all correct for doing so.

However, when one turned to look at the offense, it became a little more difficult to hone in on what went wrong.

You felt like you didn’t have enough fingers to point, nor a single place to even start. So in case you forgot, or are still having trouble, here were UConn’s biggest ailments versus Towson:

But by this Saturday night, the unit will have had more than two weeks to cure its plagues in practice, giving little reason why Chandler Whitmer and co. won't be in better shape against Maryland. And, according to Paul Pasqualoni, the last three of the above issues have been fixed.

Of course, it won’t be until after kickoff when we learn if they have or whether any of the Huskies’ problems do crop up again. Yet, we can tell you how UConn will match up with the Maryland defense; a very strong unit from a year ago that the Huskies scored 17 points on down at their place.

Beset by unthinkable injuries at quarterback, (they finished their year with a true freshman linebacker under center), the Maryland Terrapins were an exercise in misfortune last year en route to their 4-8 finish. Had it not been for a defense that allowed 3.5 yards per carry and only 207 passing yards a game, they would’ve given complete new meaning to the phrase "shit out of luck".

All-American defensive lineman Joe Vellano led the team’s new 3-4 defense alongside Darius Kilgo, Darin Drakeford, Kenny Tate and Demetrius Hartsfield, all of whom were good fits for the scheme. Now in 2013, all except for Kilgo are gone, but the defense no longer has to take the field knowing it’ll receive little support from the offense. In fact, the Terps have thoroughly beaten their opening foes of 2013 (Florida International and Old Dominion), but in a much different way.

We’ll have more on that later in tomorrow’s film breakdown of the Maryland offense.

Coordinator Brian Stewart enters his second year in College Park coaching the attacking 3-4 style he’s taught for the last eleven years in both college and the NFL. He cut his teeth under current Texans defensive mastermind Wade Phillips in San Diego and later Dallas, where Phillips was hired as the Cowboys’ head coach. Prior to arriving at Maryland last year, Stewart led the Houston Cougars’ defense for two seasons.

While the base front in his playbook does feature three down linemen and four linebackers, Maryland’s system is actually predicated on 4-3 principles (just like Phillips’). As opposed to eating up blockers, like they would in a traditional 3-4 system, defensive linemen are responsible for shooting single gaps between opposing offensive lines. Linebackers play with a similar aggressive mindset, as one outside ‘backer is almost constantly sent in as a fourth rusher (or, think of him as a fourth defensive linemen).

The Terrapins utilize a lot of "Odd fronts", which are simply alignments that put a nose tackle directly over the center pre-snap. In this system, Kilgo won’t rush the center head on, but instead slant to the gap to his right or life that he’s responsible for. Slanting is common for all three down linemen in this defense on any given snap, as it helps clog protect schemes and cover up the defense’s weak spots in the B gaps. 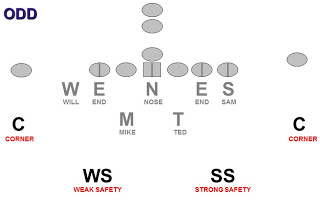 Behind the aggressive front seven won’t be the frequent man coverage you’ll find with Phillips’ NFL units. Instead, you’ll predominantly see Maryland call heavy doses of Cover 4 and fire zones. This favoring of the more conservative, but rock solid, Cover 4 has Edsall’s fingerprints all over it. The fire zones are where things get tricky, as the Terps will bring pressure from varying angles. The fortunate thing for UConn is that excluding these fire zones, very rarely will Maryland commit to any sort of significant blitz. 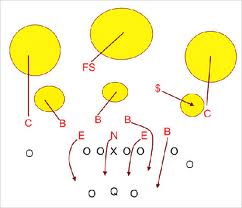 Only four of the five returning Terrapin defensive starters will take the field Saturday night after senior cornerback Jeremiah Johnson sustained a toe injury last weekend. The healthy first-teamers are Kilgo the nose tackle, corner Dexter McDougle and inside linebackers AJ Farrands and L.A. Goree, While it’d be logical to assume the rest of the unit is relatively green, you’d be perfectly wrong. Excluding their six first-time starters, 10 current Maryland back-ups have starting experience thanks to the injury bug that feasted on their lockerroom last year.

Now first and foremost, this unit is strong up the middle. Next, it’s flexible and athletic enough to play multiple fronts. The Terps employed a very aggressive gameplan with a dime package look (six defensive backs) that took three returning starters off the field to counter the spread, pass-happy attack of Old Dominion. While the Monarchs are recent former members of the Colonial Ahtletic Association, their offense did average over 45 points a year ago and dropped 38 on East Carolina earlier this season. So, in the case the Huskies get out to an early start with their own spread, Maryland has the personnel to mix things up schematically.

With that said, Xs and Os may be the way this team has to generate a pass rush going forward. 84 percent of the Terps’ 2012 sack total came from players who are now gone. Furthermore, Maryland notched just a single quarterback takedown against the Huskies last season with a much more disruptive front.

New defensive ends Quinton Jefferson and Keith Bowers are not overly impressive on tape, though their back-ups are very active. Second-stringers Roman Braglio and Andre Monroe have combined for three and a half sacks this season, albeit against lesser competition. The one danger with this group is their tendency to disrupt even when they can’t get home, with tipped passes. Last weekend, a swatted ball at the line not only saved a touchdown, but also turned into an interception.

Goree and Farrands lead the linebacking core and pose the biggest threat against the run. They both do a good job of reading their keys to quickly diagnose plays and hurry to the ball. Farrands is a bit better in this regard, as Goree can get caught up in traffic. Marcus Whitfield and Matt Robinson man the outside. Whitfield is arguably the team’s best pass rusher, and when he’s not overrunning plays, his athleticism can also create issues in the running game. Juniors Alex Twine and Yannick Cudjoe-Virgil are the second-teamers here, who own a combined 19 tackles so far.

A seasoned secondary with four interceptions through two games would appear to be a group that the Huskies should almost avoid entirely. Yet, provided Chandler Whitmer has time to throw, this is actually a unit they can take advantage of.

The Terppain thefts thus far have come via two horrid underthrows, a pass sent into triple coverage and a ball tipped at the line of scrimmage. In addition, despite being aided by a much better pass rush year, this unit mustered the same number of turnovers in 12 games.

Sophomore safeties Anthony Nixon and Sean Davis will patrol the deepest part of the field for Maryland. Nixon was a part-time starter in 2012, though his tape so far in 2013 has been unremarkable and Davis is a first-time starter. As mentioned, top cornerback Jeremiah Jefferson is out with a toe injury, so Isaac Goins will replace him. Goins is an aggressive cover man that tackles well in space, much like senior Dexter McDougle, who will matchup on the opposite side. Yet even late in their careers, the pair have both shown a susceptibility to falling for double moves.

The third and fourth cornerbacks are true freshman Will Likely and Alvin Hill. Likely is a 5’ 7" Florida native who boasts excellent speed and can be a terror on slot blitzes. According to ESPN, he was a four-star recruit a year ago. Hill should only see significant time if there’s an injury, or the Huskies begin playing a lot of four-wide receiver sets.

UConn’s best offensive drive of 2012 came against when the Huskies took a late 24-14 lead down in College Park last September. As with most impressive series, this stretch was a product of good line play, accurate throws, strong catches and runs with conviction. Now with a different playbook and drop-off in talent on the opposite sideline, there’s opportunity to sustain multiple drives like this Saturday night.

Up front, the Huskies offensive line ought to handle the newcomers for Maryland, particularly with the return of right tackle Kevin Friend. Friend is the team’s best offensive lineman, and returning center Tyler Bullock is better equipped to handle a nose tackle like Kilgo. The key will be communication to control the slanting, block up the fire zones and find Whitfield.

Behind them, the UConn tight ends don’t pose enough of a passing threat yet, so it will be up to the backs and slot receiver Deshonn Foxx to win against the Terrapin linebackers. The Husky linemen will be able to keep a hold on them in the running game, if they can get to the second level. From there, it’s up to McCombs and company to find the holes. Misdirection and designed cutbacks are the best ways to attack this linebacking core in the run game.

Geremy Davis and Shakim Phillips will find equal matches on Saturday when going against the physical Maryland defensive backs, though they have a decided advantage in the height department. Settling into the holes found inside the Terrapins multiple zones and using their size will be their biggest keys. Crossing routes are the way to go against fire zones, though plays will be available downfield if Whitmer is protected.

Check to deep pass plays when they’re not in Cover 4, and run double-moves. Maryland often protects itself with deeper coverage, but when they change to man-to-man looks, Whitmer must recognize them and take advantage of the opportunities there. Old Dominion and Florida International both left points on the field by missing open shots downfield. UConn can’t afford to do this Saturday night.

Produce zero turnovers. It’s a simple key with a tremendous amount of importance. The Huskies are underdogs, they don’t have dangerous special teams to flip field position or score from and you can’t give Maryland quarterback CJ Brown any more chances than he already receives.

Communicate well along the offensive line. There is no physical mismatch here. Many of the same pressure schemes Maryland will bring are similar to those Towson showed, so there ought to be a degree of familiarity. The no-huddle approach should also stem some of the blitzing, which can be blocked up no matter what if they communicate.