On Away Games, and Fandom

A pilgrimage to one of the promised lands of college football opens one fan's eyes to true fandom.

Share All sharing options for: On Away Games, and Fandom

A man's wallet will tell you a lot about him.

There are the almost Spartan-esque money clip owners, whose wallets are a vessel of efficacy and efficiency.

I would be the opposite of that.

For those of you who have seen Seinfeld, I have what you would call a "Costanza Wallet."  It's full of mementos and receipts and knick-knacks from the past.  I occasionally do purge the contents of my wallet, throwing out meaningless items that have tagged along or gotten ruined by the friction and compression.

Many are easy to part with:  A ticket to a soccer game versus Dartmouth from last August.  Five dollars off online delivery from a restaurant in New Haven that no longer exists.  A hotel key from months past.

But there is one item, no matter how deteriorated or battered it gets, that I will never discard. 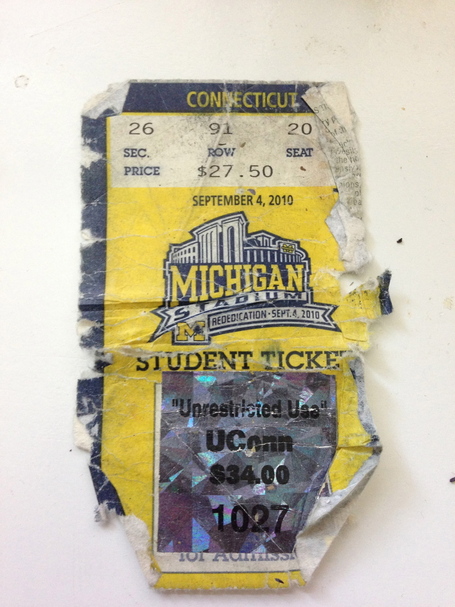 This dissolving, flimsy piece of paper is a student ticket from when UConn played Michigan at the Big House in 2010.  After nearly three years, a swim in the ocean off the Jersey Shore, and at least one run through a washer/dryer, this crumbled mass is my last physical keepsake from a trip to a game that changed the way I looked at sports, friends, and life.

It was reaching Midnight on September 2, 2010 when my fraternity brother Peter and I looked at each other with a twisted grin.  We ran down the hall into the next room.

"We're going to Michigan," I said, with the certainity of Liam Neeson in Taken.  "If any of you want to come pack your bags now."

It was a foolish statement, and I honestly thought that no one would join us.  Four others immediately began packing their bags.  Within a half-hour we were on I-84 in my 2000 Toyota Sienna minivan, guided only by a GPS told to go to the University of Michigan and fueled only by Red Bull variants and some Wings over Storrs we stole from a friend. 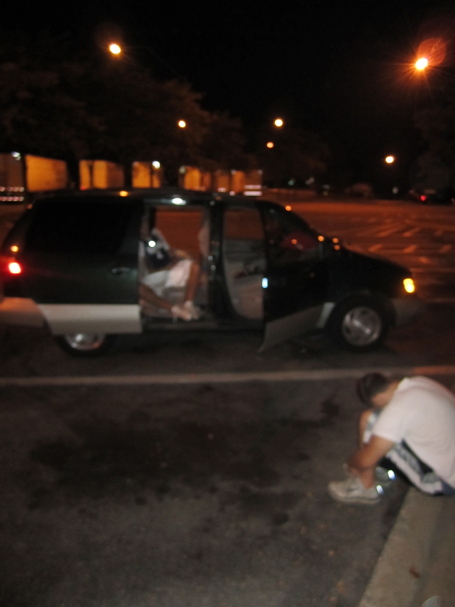 The next twelve-or-so hours were a blur of cigarettes, caffeine, and gas station bathrooms.  When we reached Ann Arbor, it was mid-day Friday.  We parked at our fraternity's house, expecting to pass out and awake the next day for the game.  Instead we were treated to what seemed like an endless supply of beer, food and handshakes meeting people whose names I have long since forgotten.  By the time we were able to sleep, we were so beleaguered a cold wood floor was as comfortable as a down-stuffed California King.  And, we were thankful for the 3:30pm start time. Unfortunately, the University of Michigan does football much differently than UConn.

At 8am, a short four hours after I, and most UMich students, had fallen asleep, music began blasting out of speakers approximately 10 feet from my head.  I awoke to a sea of yellow shirts, all acting like the night previous had never happened.  Red solo cups covered lawns and I, for the first time in my life, was overwhelmed by fandom. 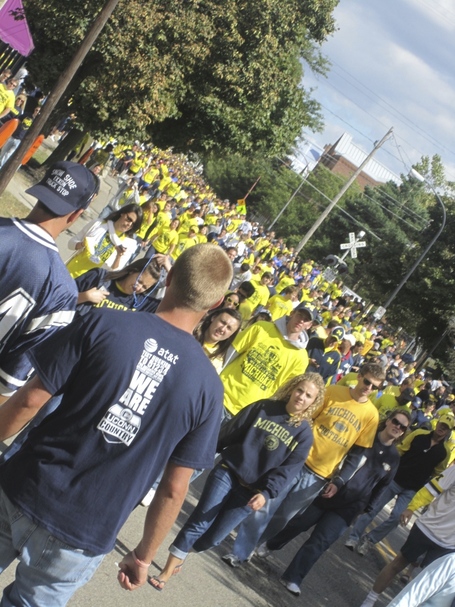 UConn has a great fan base.  But this... this was something far grander than our school could handle.  Streets cordoned off for the sole purpose of 20-somethings piling onto lawn after lawn, all with one similar goal.  Walking down the streets, we were booed, jeered, cheered, given applause, given drinks, shots, and stray empty beer cans to the face.  It was unlike anything I've ever experienced before.  We were hated and respected at the same time.  By noon, I was exhausted and found solace in that same minivan we had driven here, somehow parked on the front lawn of the Kappa Sigma house.  I pulled my hat over my eyes and wondered what to make of this.  I was in over my head.

I awoke an hour or so later to someone slapping on my car door.  I don't know who it was, but I sprung into action and began our walk down to the Big House.  There we were, specks of white and national flag blue amidst a monstrous ocean of maize and blue, scared and weak.

I felt like the Huskies felt that day.  The stadium shook with every first down and the Michigan fight song was repeated so many time I can recite it by memory to this day.  Those who are Huskies' efficiantos know the results of the game.  UConn got stomped, it was the debut of Denard "Shoelace" Robinson, and the game set an attendance record for the highest attendence in NCAA history at 113,090. 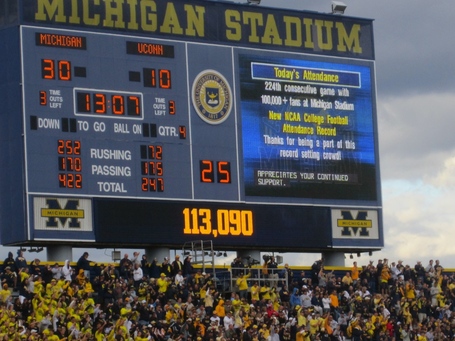 One hundred thirteen thousand people. Nearly three Rentschlers.  If that doesn't give you enough scale, here's a video:

Dan's face said it all.  There were no words for the experience. We returned from the game changed men.  Instead of hanging around and enjoying another weekend night at Ann Arbor, we packed up our stuff and went home; our tails tucked between our legs, still in awe of what just happened.  I felt like Marco Polo when I returned to Storrs, where people either rolled their eyes to my stories or didn't believe them at all.

To be fair, Michigan has roughly 100 years of football tradition on us.  We're young - but this could be us some day.  We need the fans to do it.  Not a single Michigan fan was sitting.  Not a single student came in late.  We need the dedication of students, alumni and everyone else combine to create an atmosphere that overwhelms away teams.  When I was a student, I remember how loud Gampel was when we faced Texas.  I remember when Luke Harangody would come to town and the chorus of jeers and boos that would rain down every time he touched the ball.  And I remember when Larry Taylor used to field punt returns to a chant of "LAR-RY TAY-LOR."

The Michigan game at Rentscheler is being touted as one of the biggest games in UConn's short BCS career.  The Wolverine faithful has been driving the ticket prices higher than UConn has seen in Rentscheler's existence.  They are trying to make this game an away game for us.

With Michigan's trip to East Hartford only weeks away and the eve of the season opener upon us, it's time to step up and make this environment as loud and raucous as possible for them, and every other team that walks onto that field.  Right now, it's but a minute imitation of what Michigan experiences on a weekly basis.

But we can change that.