Well, I've chipped away at it and I've finally got together my Third Annual UConn recruiting summary. The conference realignment musical chairs meant I had to add in a whole bunch of new schools to the assessment. Sorry about the delay y'all.

Before we jump into it my standard disclaimer

Most everything I have seen on this topic has been overall team rankings, which is a subjective analysis on top of subjective analyses of thousands of high school players. So I decided to strip away the subjective team analysis and only focus on the players because although it is subjective, a group of 3 star players is more likely to be better than a group of 2 star players. The best chance of consistent success is to have more players with higher ranking. The charts below are based upon the ratings posted on Rivals.com for the years 2004-2013 (what was available). Rivals has the star ratings going back to 2002, so I posted those as well. On to the charts!

The first chart is a simple plot breaking down the total 2 and 3 star players that were signed by UConn. 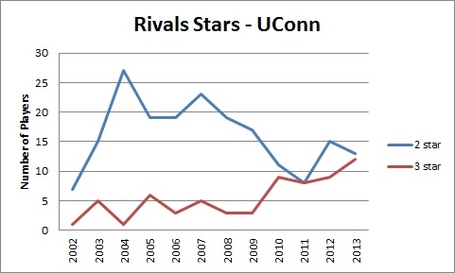 Coach made a big leap in recruiting by increasing the number of 3 star recruits by 33% from 9 to a school high of 12. Definitely progress on that front by P. Still haven't gotten that elusive 4 star recruit yet. Though he did bring back homegrown talent 4 star Stewart as a transfer. 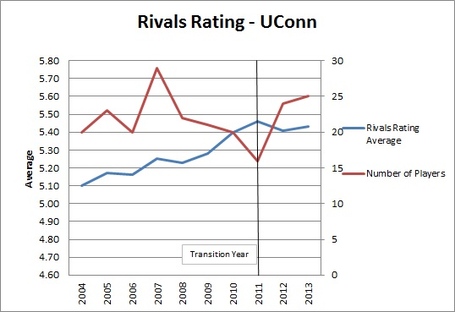 Unfortunately, by this metric, Coach only maintained the about same level as the last three years despite the uptick in total number of 3 star players.

And now the most interesting graph. As I mentioned before, we have a number of new conference mates this year. I've gone back and tabulated up all the Rival's ratings for these programs for the last five years. And well... 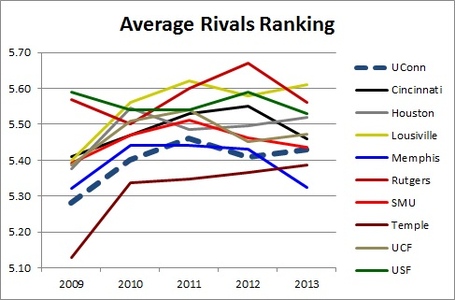 We continue to maintain a low spot in the conference rankings despite the new additions from "lesser" conferences. *Sigh*. At least we are dominating Memphis and Temple!

A new addition to my report is to capture how P has been doing in the state of Connecticut. I've made a table of the school and star rating of the top ten recruits from each of the last five years. So this includes Edsall's last two full years, the transition year and the first two years of P's recruiting.

This past year P executed as advertised and brought in a majority of the top "talent" the state has to offer. Unfortunately, that talent this past year was pretty weak even by CT standards. Oh, and Maryland happened to take the only 4* recruit CT had to offer. It is sadly ironic that the guy who caught grief for pissing off CT high school coaches walks in and takes the top recruit last year. *Sigh*

It's a big year for Coach. We're coming off back to back 5-7 records and it's now his team as his first true recruiting class will be having a predominant role in this team. Let's hope P stays away from the offense and keeps DeLeone as far away from the gameplanning as possible because that's really the only way we have any hope of competing. Oh and there's that whole thing about replacing the D coach and significant starters on D. *Sigh*.