Share All sharing options for: Conference Re-alignment is Confusing

So today’s the big day, the day the Big East that we came to love so dearly officially kicked the bucket. Syracuse, Pittsburgh and Notre Dame are all now members of the ACC, and a whole litany of other conference realignment moves become official, resulting in a mess that apparently the schools and networks themselves haven’t figured out yet.

This morning, UConn fans visiting the athletics website were welcomed by this graphic announcing the school’s new affiliation with the "strong, stable, united and competitive" American Athletic Conference. Looks great! Only one problem…

The school forgot about Central Florida, which is incredible considering that they actually included outgoing Louisville and Rutgers, AND they remembered to include Navy, Tulsa, East Carolina and the hilariously forgettable Tulane. I mean if they’d forgotten Tulane I don’t know if anybody would have even noticed, but since it was UCF, the second largest school in the nation, our good friend Brett McMurphy from ESPN was right on the case.

Yikes, bad look when you have probably the most well respected college football reporter in the country calling you out for screwing something up. In fairness to UConn, the school was quick to fix the graphic, and athletic department spokesman Mike Enright tweeted at McMurphy a few minutes later apologizing to UCF and clarifying that UConn does in fact know its new conference brethren.

Now, while McMurphy is basically flawless, his employer most certainly is not, and ESPN made a bit of a graphical fool of itself later in the afternoon after it released this map of the new American Athletic Conference landscape. 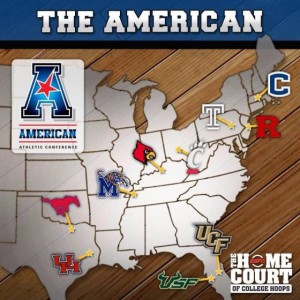 Oh man… where do I even start? Do I start with the fact that Memphis decided to realign itself with the Kentucky border instead of the Mississippi one? How about Temple’s decision to bail on Philadelphia, or Cincinnati’s curious move to Columbus?

No? How about the fact that UConn has relocated to Massachusetts!?! The University of Connecticut, flush with about $1.5 billion in new cash straight from the state legislature, just upped and left and, by the looks of it, kicked UMass to the curb and claimed Amherst all to itself.

I guess we’re also back to using our old Block C logo too, man as if the conference rebranding weren’t confusing enough.

Eventually ESPN did release an updated map with all the schools in their proper locations (although they didn’t fix UConn’s logo), but still, I think today proved that as much as people like to project otherwise, nobody really knows what the hell is going on.

It does make me think though, if we make a map of the ACC, put UConn on it and get it retweeted enough times, then maybe people will just start assuming UConn actually is in the league? It’s worth a shot right? Anybody out there good with Photoshop?