What bowl games are in play for the conference?

With all the change that’s occurring around college football these days, at least one thing is remaining a constant for one more year, and that’s The American conference’s bowl picture.

Despite a seemingly endless stream of updates from Brett McMurphy and his ilk about different conferences locking down new bowl deals for upcoming years, as the ACC and Big Ten have for the Pinstripe Bowl for example, most of those changes won’t take effect until next year.

What happens then? Who the hell knows, but if UConn football can make a grand return to the bowl stage again, here’s where they could end up.

Obviously this is the best-case scenario and a major long-shot, but despite the hit that UConn’s conference has taken over the past few years in the media and within the changing structure of college athletics, the conference does still have one more automatic bid to the BCS before the system changes and the road to the postseason gets a bit more challenging.

Whether or not UConn can take advantage is anyone’s guess, but I think it’s fair to say that the league championship is Louisville’s to lose this year, and knocking them from their perch could be a tall order.

This would be a great spot for UConn to wind up for a variety of reasons, the most obvious being that getting an invite would probably mean at least a nine win season. But besides the prospect of having a great year, UConn winding up in the Russell Athletic Bowl would mean a matchup against the No. 3 team in the ACC, which could mean a very intriguing matchup if the right teams have a big year.

As far as travel goes, the bowl’s location in Orlando would mean pleasant weather, Disney World and an easy flight from New England. You could even conceivably drive, so organizing a student bus trip from Storrs could become an option too.

The only problem is that because of its location in Central Florida, the bowl would have a major incentive to invite UCF or USF if either team finishes among the league’s top teams. Though more likely than a BCS berth, this bowl is still probably a long shot.

I don’t have any idea what the hell Belk is or what kind of company they are, but I do know that UConn has played in this game back when it was known as the Meineke Car Care Bowl, and this picture was taken at some point prior to the game. 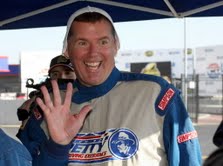 I mean come on, regardless of what you think of our old friend Randy Edsall, that is just hysterical. Imagine if someone could get Pasqualoni to smile like that? I don’t know if the world could handle it.

But I digress… The fact that we have another possible ACC matchup in this game could be intriguing, especially if Syracuse or Pitt has a big first year and winds up in this game too. Being in Charlotte, N.C., it would also be a fairly easy flight and a reasonable drive for UConn fans, although my guess is there wouldn’t be as much to do in Charlotte as there would be in Orlando once you get there.

If nothing else, you could always go watch Kemba and Ben Gordon if the Bobcats are in town. I can’t imagine it’s too hard to get tickets.

This is by far the most geographically convenient bowl UConn could wind up in, and from a competitive standpoint probably the most likely scenario if UConn does end up having a successful year.

With Syracuse gone, the only other school besides UConn left in the conference in the vicinity of Yankee Stadium is Rutgers. Ultimately if both teams have a good year, it’s going to be a toss up to which team gets the invite, but given Rutgers’ recent track record, they could easily wind up in any of the three bowls already mentioned before the Pinstripe gets their pick. So who knows?

Regardless of who from the Big 12 UConn gets matched up against, a berth to the Pinstripe Bowl would mean a large portion of the team’s fanbase could take the train into the game, and the rest could easily drive. Plus there’s a ton to do in New York City, even in the dead of winter, so I think it’s fair to say that short of a BCS berth, this is the result that UConn fans should be pulling for this year.

Here’s another bowl UConn has played in before, earning arguably their biggest postseason win in program history back in 2010 when the Huskies clobbered a solid South Carolina team and got to celebrate by stuffing their faces with Papa John’s pizza.

If UConn were to wind up here, the only positive I can think of is if they get matched up against a really respected (but incredibly overrated) SEC team. Tennessee seems like they’d fit the bill.

Who even is the No. 1 team left in Conference USA? I mean, all the good teams play in The American now, or at least will be soon. I guess there is still Tulsa, since they won’t be joining for another year. Either that or you could get another overrated SEC team, Vanderbilt or Kentucky most likely if either of them are bowl eligible.

Beyond that, this bowl itself pretty ‘meh,’ but its location in Memphis isn’t bad. There’s actually a lot to do in Memphis and the food is outstanding, so in the grand scheme of things UConn could do a lot worse, for instance.

This bowl has USF written all over it. It’s based in St. Petersburg, it gets the last pick of The American and whoever gets invited earns the privilege of playing the No. 4 team in what’s left of Conference USA, who at this point could easily turn out to be Tulane.

I mean, I guess there’s the warm weather, but still, lets just say there isn’t a lot of glamour to this one. But I suppose if the alternative is a third straight 5-7 season (or worse), beggars can’t be choosers.

Also, apparently Belk is a chain of department stores in the south. I guess buying the naming rights to a bowl game does pay dividends, because I would have never known that before. Hooray corporate sponsorship!