A Proud Day For UConn Football

A banner weekend for the UConn Football program, and noone seems to care

Share All sharing options for: A Proud Day For UConn Football

EDITORS NOTE: I wrote this article a few weeks ago as my "tryout" to become lead blogger for The UConn Blog. Please pretend this was posted in a more timely manner, like 3 weeks ago.

The NFL Draft wrapped up with the Indianapolis Colts taking South Carolina Tight End Justice Cunningham with the 254th overall pick. Avid NFL fans beamed about the fresh influx of talent on their favorite teams and SEC fans had the pleasure of bragging rights over the record 63 players taken from the NCAA’s most dominant conference.

Personally, I was actually quite proud to see 5 University of Connecticut players picked in the NFL’s annual selection meeting- a school record. The same number as Oregon, Tennessee, West Virginia and Texas A&M. Those five join 10 or so former Huskies currently in the NFL.

The UConn Athletics page has a good write up about the players, but I want to focus on what this means for UConn football, and the athletic program in general.

With all the hysteria of being caught with our pants down throughout this whole conference re-alignment movement, none of Husky Nation seems to be noticing that slowly but surely we are building a legitimate football program. Rome wasn’t built in a day, and without the advantage of a time machine to hop back to 1900 and discuss the importance of creating a top notch football program to the administration of the Connecticut Agricultural School, the only way to football relevance will be the slow and steady path we are currently on. 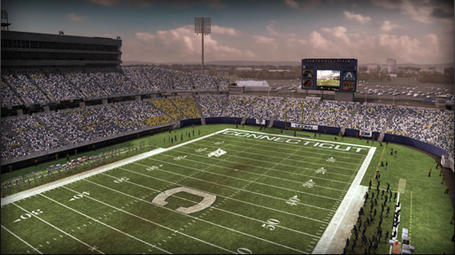 Everybody please take two deep breaths and repeat after me "We are going to be just fine." 15 years ago, we were an FCS (artist formerly known as 1-AA) football program. One of the major complaints I’ve heard from other UConn fans was that now we’d never become a football power. Newsflash: there’s a very good chance that was never going to happen anyway, so I don’t know why anyone cares. Second, what has being in the ACC done for, say, BC? For them the move was supposed to be a boon for recruiting and the start of a new gilded age for New England’s elite college football program.

What actually happened is that they had a good run their first 2 years, arguably accomplished on the strength of recruits signed while still in the Big East. But since 2009, they have been on a steady decline going 8-5, 7-6, 4-8 and 2-10. They had 5 players taken in the NFL draft- since 2009! Keep this in mind as football mediocre’s Pitt and ‘Cuse make their way over to America’s most overrated conference. I highly doubt there was a single football recruit who signed with the Huskies for the opportunity to play Pittsburgh and Syracuse every year. Do we even want to be in the ACC?

Another argument I’ve hated hearing was that football’s inevitable future sucking would lead to the decline of our pride and joy: the men's basketball program. Having a mediocre football program has not stopped Duke, UNC, Kansas, Kentucky (or us!) from being the class of NCAA men’s basketball across the past 20 years. Our "doomed" basketball squad just had a 5 star McDonald's All-American transfer from NC State to play in Storrs (and since the writing of this article, a top 30 recruit). He didn’t seem to mind that Tulane and East Carolina were on the conference schedule.

Which brings me to my final point. In a brand new conference with a random smattering of mediocre to decent teams at football and/or basketball, the door has opened for us to become that conference leader and further ourselves on the national scene by being the big fish in this pond.

We have the AAC(woof)’s best basketball program by far with a new practice facility on the way to match the professional accommodations of the football team. Football’s recruiting classes are getting consistently better every single year, and 5 players getting drafted will only help our cause. We also have (in my unbiased opinion) the next great college basketball coach taking the reins of a program that stood atop the best conference in college basketball for the past 20 years and has a Top 3 alumni presence in the NBA. Despite an average slate of conference opponents, we will now actively be in the market for some FUN non-conference games in both of the major sports. Basketball will continue its dominance and someday, not too long from now, we’ll be a solid football program.

Until then we’ll have to be content to watch men's basketball win 3 out of the next 12 titles.. again.