Here's a photo of the Air Force base hangar UConn and Michigan St. will play in

Share All sharing options for: Here's a photo of the Air Force base hangar UConn and Michigan St. will play in 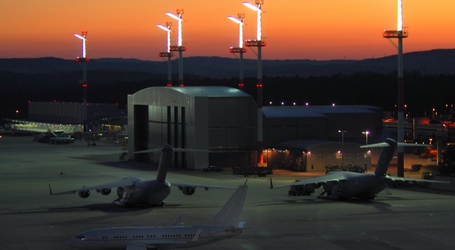 The headline pretty much says it all. We got this thanks to a pretty run-of-the-mill press released ESPN issued today about the upcoming Armed Forces Classic between UConn and Michigan St. I have included it below the jump for your reading pleasure.

ESPN announced the creation of the Armed Forces Classic, a series of Division I college men's
basketball games to be played on military bases overseas. Ramstein Air Base in Germany is the
inaugural location, with the University of Connecticut and Michigan State University playing in a C-5
transport airplane hangar on the base.

The game will be televised Friday, Nov. 9, with coverage beginning at 5:30 p.m. ET on ESPN. The event
is part of ESPN's Veteran's Week initiative honoring the men and women who are serving and who have
served in the United States military, both at home and abroad.

While in Germany, Connecticut and Michigan State players and coaches will be visiting servicemen and
women at Landstuhl Regional Medical Center. They will also conduct a basketball clinic for children at
Ramstein Air Base.

"We at the University of Connecticut are honored and humbled to be asked to participate in such a
terrific event as the first Armed Forces Classic," said Connecticut coach Kevin Ollie. "Being able to
travel overseas and play for the brave men and women in our military to whom we owe so much is an
unbelievable opportunity for our basketball program and we are extremely thankful to ESPN for including
us. The fact that the game will be played at Ramstein Air Base in Germany makes it more exciting for our
team, since our roster includes three young men who are German citizens, but all our student-athletes
are looking forward to this once-in-a-lifetime experience."

"On a personal note, I couldn't be more proud and honored that my first game as UConn's head coach
will be in the Armed Forces Classic against an outstanding program like Michigan State. I know that
Coach Calhoun had a great relationship with Coach Izzo, which I hope to continue in the future. I am
grateful to have such an inspiring way to begin my career."

Michigan State is coming of its 14th consecutive NCAA Championship appearance, including winning the
2000 NCAA Championship. Head coach Tom Izzo participated in Operation Hardwood in 2005 and 2006,
traveling to Kuwait to coach teams of American service members.

"This is another amazing opportunity for Spartan basketball and Michigan State University," said MSU
head coach Tom Izzo. "I'm thankful that ESPN reached out to us to be a part of this great event. Being a
part in the first college basketball game to be played on a military base overseas is truly an honor. Playing
in the Carrier Classic on the USS Carl Vinson last season provided memories that will last a lifetime, as
the historic event was so much more than just a basketball game. The opportunity to honor the great men
and women of the US Armed Forces was a humbling experience, as we felt that we got so much more in
return than we gave. To now have the opportunity to take our game overseas to servicemen and women
serving to protect us is an awesome experience. I'm reminded of my trips to the US bases in Kuwait, and
what a life-changing experience that was for me. Everyone associated with the Michigan State basketball
program is excited for this unique opportunity."

"We are excited to host the inaugural Armed Forces Classic at Ramstein Air Base and it's an honor to
have these championship athletes compete here overseas. Like a champion sports team, maintaining
peak capability allows our Airmen to build and keep our competitive edge sharp." said Brig. Gen. C.K.
Hyde, 86th Airlift Wing Commander.

Future teams and game sites will be announced at a later date.

Ramstein Air Base, Germany:
Ramstein Air Base is home of the 86th Airlift Wing. Ramstein's mission is to provide combat airlift across
the globe. Their force moves food, people and equipment to remote and deployed areas. Ramstein
assures key strategic capabilities by providing essential global access through Mobility and Cyberspace.
To learn more, visit www.ramstein.af.mil/.