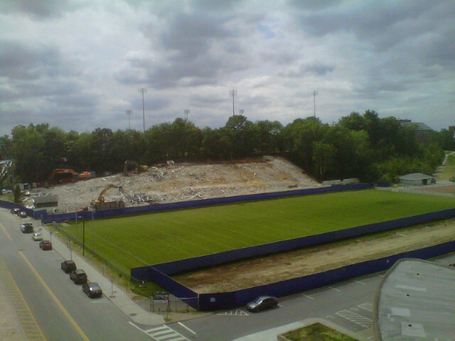 Well, they put the old girl out of her misery. A decade after UConn played its last football game there, Memorial Stadium is no more. I saw one of, if not my first football game there, and it's where, as a small child, I became a proud member of the Junior Husky Club (it came with Jonathan stickers -- and yes, I was cool when I was eight, why do you ask?). Alas, as the above photo from Grategatsby shows, she is no more. However, this isn't the end for that beautiful plot of land on Stadium Road, as with just a little bit more funding a new building will rise from the ashes of the old and Memorial Stadium will live up to its destiny of becoming a basketball practice facility. Football will literally be destroyed and consumed by basketball -- I can't imagine a better analogy for how life should be.