Share All sharing options for: Memorial Stadium will be torn down next week to make room for basketball practice facility 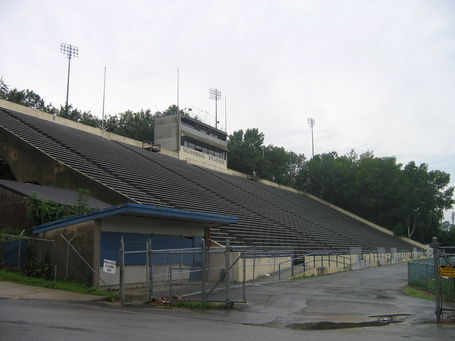 Buried at the bottom of the AP's interview with Warde Manuel was a delightful non-succession nugget: Memorial Stadium is being torn down starting next week. The stadium was the home of UConn football for fifty years, but hasn't hosted a game since 2002. Over the past decade it has served the dual purpose of being a delightful set of stairs for athletes to train on and being an eye-sore the rest of us couldn't wait to see destroyed as we longed for a basketball practice facility.

Those of us in the second camp won't have our entire wish granted yet -- UConn is still raising money for the new facility -- but tearing down the old stadium is an important first step and creates the impression of real progress, and Manuel hopes that actual construction could start within the year.

Here's the relevant portion of the AP report:

Manuel also said that UConn will begin in the next week tearing town its old on-campus football stadium, Memorial Stadium, to make way for its new basketball practice facility. But he said the school is still working to raise the needed money (estimated at between $35-40 million) to fund the facility.

"We are hoping at some point this year to be in a financial position to put a shovel in the ground and break ground on the actual construction," he said.