The fanbases of the Big East as Simpsons characters

Share All sharing options for: The fanbases of the Big East as Simpsons characters 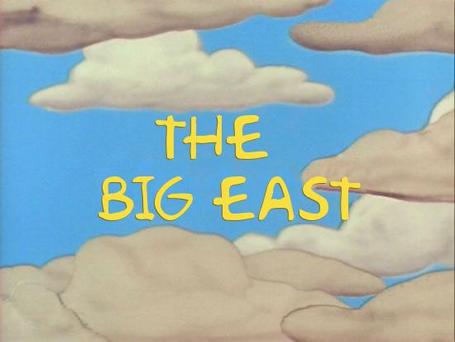 Yesterday was the end of the Big East regular season and the end of an era. West Virginia is decamping for the Big XII next year meaning that no matter what Syracuse or Pittsburgh do, the Big East's most recent incarnation is dead forever. Sure, it's only been seven seasons since the 16-team behemoth known as the Big East assumed its current form, but in that time I like to think we've become one huge demented family. The league ranged from Providence to Chicago and from Tampa Bay to Eastern Canada Syracuse, and we here at TheUConnBlog would be remiss if we didn't give it a proper sendoff, so here is our gift to you: The fanbases of the Big East as Simpsons characters, presented in reverse order of this year's standings. 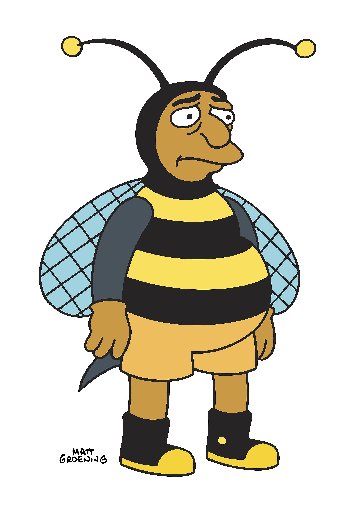 DePaul fans are the ultimate embodiment of the Bumblebee Man. They're always around, excitable and enthusiastic, but at the end of the day they just look silly, they're ultimately superfluous and they're afflicted with a deep inner sadness. Compare this DePaul fan five days ago with last night. So much hope, so little reason.
Relevant Quote: "¡Ay, ay, ay, no es bueno!"

John Marinatto is a Providence fan.

Relevant Quote: Miss Hoover: Now put paste on your paper. Ralph, are you eating your paste?
Ralph Wiggum: (Gluestick poking out of his mouth) No, Miss. Hoover. 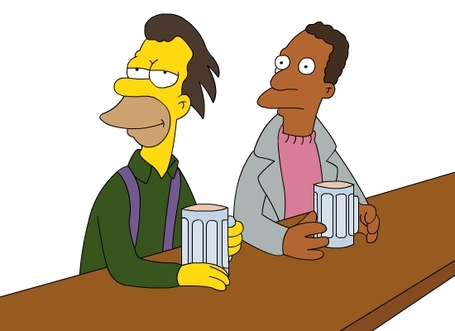 As far as I can tell the only difference between Villanova and Pittsburgh is that Villanova's lifelong goal is to field a team made up entirely out of guards while Pittsburgh only wants to start five power forwards at the same time. Both fanbases have had their share of good times and their teams have lots of potential (just like Lenny and Carl are established citizens of Springfield with good jobs at a nuclear power plant) and both have seen that potential blown year after year (just like Lenny and Carl are ultimately losers who just hang out at Moes). The two programs have combined for one Final Four since the establishment of the new look Big East, which I can only assume occurred because it was impossible for both teams to lose painfully when they met in the 2009 Elite Eight.
Relevant Quote: Lenny: "Remember when we used to kiss like that . . . with our respective girlfriends?"

If anyone was ever going to tell you a story about the NCAA tournament being held at Madison Square Garden with tickets costing five bees (there were bees on the nickel at the time, give me five bees for a quarter you'd say), it'd be leading St. John's fan and noted college basketball expert Mike Francesa. Also, Grandpa Simpson strikes me as someone who'd be really excited about using the term "redmen." I'll just note here that the other character under consideration was Maggie Simpson, because she lives in a house (MSG) but everyone else does whatever they want in there.
Relevant Quote: "I'm cold and there are wolves after me."

Rutgers has so much potential to be a cool basketball school. The RAC is awesome, they're close to the recruiting hotbed of New York and they have the resources of a state school. But like Barney, Rutgers and their fans are addicts, helplessly hooked on college football glory that will never come and pouring all of their resources and attention into a hole that will never yield results.
Relevant Quotes: "Don't cry for me, I'm already dead."

It'd be nice if, just once, things could work out for Seton Hall fans, if only so they wouldn't have to keep dealing with increasingly crazy attempts to turn their program around. Can you believe the Bobby Gonzalez era was a real thing at a major program? And then, just when things start to look good and it seems they've got a real professional to fix their program (you know, like a doctor), Kevin Willard turns out to be just as insane ("I'm the only coach in the country with white guys who can't shoot.") and prone to meltdowns (the last week). No wonder things seem grim.
Relevant quote: "Inflammable means flammable? What a country."

If there was ever a fanbase that didn't need the five-wins-in-five-days Big East Tournament title and a third national title it was UConn's. Huskies fans are notoriously absent when the team struggles and incredibly annoying when things are going well. Loud and arrogant, UConn fans know their program has been the dominant Big East program of the last 20 years and they do not mind telling you. Even the school's official twitter account has gotten in on the fun, actively trolling Syracuse and Rutgers in the past week. And that's before you get to this blog's twitter account, which has never seen an opportunity to shit talk that it didn't like.
Relevant Quote: "Shoplifting is victimless crime. Like punching someone in the dark."

C'mon, like this was going to be anyone else? Fun fact: the student who plays the mountaineer gets a full scholarship to West Virginia and is allowed to shoot the musket at his leisure.
Relevant Quote: Russ Cargill: "I was tricked by an idiot!"
Cletus: "Hey, I know how you feel; I was beat in tic-tac-toe by a chicken."

We have to talk Louisville fans, because despite having you around for several years now, I feel like we've never connected. You see, you've got a lot to offer -- great history, wonderful fanbase, a good coach -- but you're consumed by a preoccupation. Milhouse has his moments of glory, but it's always tainted by his barely suppressed anger that no matter how hard he tries, he's never going to get what he wants, because he's never going to be Bart. And Louisville fans, I hate to say it, but you're never going to be Kentucky. And now I'm going to go into hiding because I'm pretty sure some Louisville fans are going to try and kill me.
Relevant Quote: "Oh, I hate these flood pants. [Room floods] HEY! They're working! My feet are soaked but my cuffs are bone dry! Everything's coming up Milhouse!"

If you're not reading Voodoo Five on a regular basis you're missing out on what might be my favorite blog (non-this blog division). You're also missing out on an almost unlimited supply of someone else's misery. Nothing ever breaks right for USF. Ever. If anything can go wrong, it will, and probably in Tampa. Did you see the last thirty seconds of their game with West Virginia? A game they had to have? It was brutal. Hell, Voodoo Five itself is named for a playcall that cost South Florida one of the most important games in its history. The whole school is cursed -- it poured millions into its facilites just in time for the Big East to crumble -- and if anyone is going to be left on the wrong side of the bubble by a heartbreaking buzzer beater you just know it'll be USF. Their fans really, truly, deserve a better team.
Relevant Quote: "Oh, this is bad, this is really bad! You work, and you slave, and you steal just enough for a sweet lick of that shiny brass ring... don't I get a lick? Doesn't Gil get a lick?"

One of the difficulties about blogging about a school that plays in a 16 team conference is that you're occasionally required to list the teams in that conference and try as you might, you always forget one, and that one team is always, always Cincinnati. Do you know any Cincinnati fans? No you don't. And for those of you claiming to know a Cincy fan, you should realize that no, interacting with the lovely folks who run Down the Drive and Bearcats Blog does not count. So how does that make them Üter? Well, have you seen Üter around lately? According to the Simpsons Wiki he's not technically dead, but I'm pretty sure the staff of Springfield Elementary ate him and never looked back. He wasn't missed in Springfield and I think we can all agree that if Cincinnati disappeared tomorrow we might notice something was up but we wouldn't quite be able to put our finger on it.
Relevant Quote: Principal Skinner: "Oh, relax kids. I've got a gut feeling Uter's around here somewhere. After all, isn't there a little Uter in all of us? In fact, you might even say we just ate Uter, and he's in our stomachs right now! Wait, scratch that one."

Georgetown is a very good school and very intelligent people go there, but nothing defines a Georgetown fan like their pathological need to tell you that Georgetown is a very good school and they went there because they are an intelligent person. Georgetown fans know they're smarter than you and they don't want you to forget it. They're also probably upset I said they were Martin and not Lisa Simpson, but you always need to leave Georgetown fans with something to aspire to. Remember how fast Syracuse and Pittsburgh bailed on the Big East when the ACC had openings? Well that's nothing compared to how quickly Georgetown would submit its application to the Ivy League if Dartmouth suddenly decided to give up athletics. You're smart Georgetown, but you're still not the smartest. Sorry.
Relevant Quote: Martin: "Care to make it a trio, Bart? You can brush and I can blow."
Bart: "Well, I agree you blow."
Martin: "Then it's a plan!"
Bart: "A lot of people blow, but no one blows like you."
Martin: "High praise indeed!"
Bart: "When you look up "blow" in the dictionary--"
Lisa: "Bart, he's not gonna get it."
Bart: "Fine."

Dr. Hibbert has so much going for him. He's smart, wealthy, well respected and talented. He also could not give less of a shit about his job. Not unlike Notre Dame fans and basketball. Mike Brey's a great coach, the school has oceans of resources and a national brand, and Notre Dame fans could not give less of a shit, not when there are football recruits to be disappointed by and football coaches to fire.
Relevant Quote: Marge: "Can't you do something for him?"
Dr. Hibbert: "Well, we can't fix his heart, but we can tell you exactly how damaged it is."

Marquette fans are nice. Too nice. Oppressively, sickeningly, unbearably nice. Seriously, go to a game in Milwaukee, you'll never feel more welcomed or at home. It's disgusting. Even when they're mocking you they do it in a wholesome "everyone have a chuckle" sort of way. I have nothing bad to say about them. Gah.
Relevant Quote: "Gosh darn it! Am I that pre-diddly-ictable?"

"Hi, I'm a Syracuse fan and you may remember from such collectible t-shirts as 'Six Overtimes' and 'Undefeated at the Dome'." I'm good looking and can list my accomplishments with the best of them, but don't listen too hard or you'll realize that I list a lot of minor things like "20-0" and skip over more relevant indicators of success like "Ability to beat America East teams in the NCAA Tournament." Sure, I had had my one moment in the sun (the 2003 National Championship is 'Planet of the Apes: The Musical' in this analogy), but my real success comes when I talk about all of my success. Success! T-Shirts! Also, I'm pretty sure Hoya Suxa has a fish fetish.
Relevant Quote: "I'm here to provide the facts about sex in a frank and straightforward manner. And now, here's... ''Fuzzy Bunny's Guide To You-Know-What''