The first round is complete!! It's been a pretty chalky tournament so far with only 7 upsets, four of those were 9's over 8's.

I expect there to be a lot more in the second round.

First 4 games of the second round:

The Remaining Kansas 1 vs. 9

Now that our beloved Huskies have unfortunately bowed out of the tournament we need something to occupy ourselves. Sure that tournament thing is still going on, but I've come up with a more interesting one to follow.

Porter encouraged silly bracket names in the first post promoting TheUConnBlog pool and you all delivered, well mostly. Now it's time to determine the best of them.

After the jump is the updated bracket, a few comments, and how we are going to go about determining the champ. 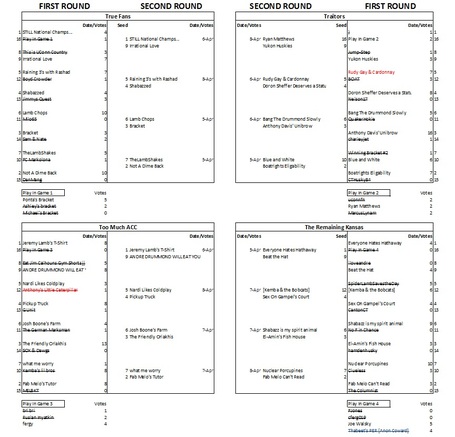 My expert committee then ranked the names in each of the brackets. If you have any complaints, please refer them to Hathaway.

As I'm sure you noticed, we had more than 64 bracket names, so there is a play in game for each region.

The plan to determine the champ will be through the lovely polling option SBNation provides us. I will post up a few polls and then that is where you all come in good readers. After a certain amount of time, I will close the polls down delete those FanPosts and put up the next batch of games. This FanPost will remain and I will update the bracket as games finish up.