Share All sharing options for: TheOpenThread: Syracuse vs. UConn 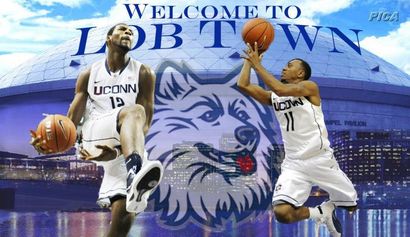 There are a lot of ways to approach a game like tonight's. You can talk about matchups and ask questions like how will UConn deal with Fab Melo? Or Can Syracuse slow down a resurgent Jeremy Lamb? You can look to the recent past and examine the game from two weeks ago, if only to once again marvel at Syracuse's insane outside shooting. Or you could take a historical tact, talk about the history of the rivalry, the dominance these two programs have shown over the Big East, six overtimes, etc. There's a future-tense angle as well. Syracuse is leaving for the ACC. Will UConn get a chance to join them? Is this the last time Syracuse will come to Storrs?

But those questions are not what I have been thinking about for the last week, or really since the schedule was released. Instead, I've been thinking about Gampel Pavilion. It's not the most famous arena in college basketball, and it doesn't always get thrown in the conversation for "toughest places to play", but for my money it's the best arena in the country. We give UConn fans a hard time for their fair-weather tendencies, but when they get excited about something they can create some real havoc and something tells me they'll be plenty excited tonight.

Gampel is a small arena for a big-time school, seating only 10,000 people (imagine if UConn knew where its program was going when the arena was commissioned in the 1980s), but it's loud as all hell when the crowd wants it to be and the Huskies have posted an eye-popping .877 winning percentage in it (129-18 heading into tonight).

Of those 129 wins, four have come at the expense of the Syracuse Orange, who have never won in Gampel. Here's hoping that UConn notches win 130 tonight so that when Syracuse heads off the to ACC they can do it knowing they never beat UConn on their real home floor.

The game tips at 9 on ESPN. Gameday will be broadcasting from Gampel starting at 8. Join us below to talk about and, of course, Go Huskies.