The five stupidest things about UConn's win over Villanova

Share All sharing options for: The five stupidest things about UConn's win over Villanova 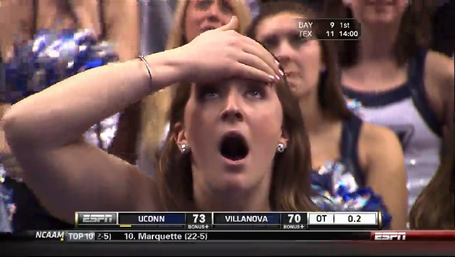 There are a lot of ways to describe UConn's thrilling last-second win over Villanova last night. It was exciting, infuriating, energizing and too close for comfort all at once. But more than anything else it was a deeply, deeply stupid game and here, in no particular order, are the five stupiest things about it.

1. The first half -- UConn knew going into the game that they had put their NCAA tournament hopes in peril and a loss would almost certainly send the Huskies to the NIT. So how'd they start? By playing their worst ten minutes of basketball of the season and falling in a 26-8 hole. They did respond of course (or Villanova just pulled a Nova), going on a 22-4 run to tie the game at the half, but that doesn't make it any less stupid. In fairness to the Huskies it would have been easy to quit in that moment and they deserve credit for fighting through it, but they never should have put themselves their in the first place.

2. Andre Drummond's Roscoe Smith moment -- With six seconds left on the clock in the first half Andre Drummond pulled down a defensive rebound and did what one does in that situation when they're a UConn freshman. He fired a full-court desperation three that went out of bounds with enough time left on the clock for Villanova to make a play. But he wasn't done yet. On the ensuing inbounds play Drummond intercepted a half-court Villanova pass and, with .9 seconds on the clock, opted to hold the ball instead of shooting a time-appropriate desperation three. Here's Shabazz Napier's take:

"Someone said, ‘Yeah Roscoe, yeah Roscoe,'" Napier reported. "He didn't see there was a lot of time left. Then, when he got the ball at .9 seconds, he didn't want to shoot it. It was like, ‘Why didn't he shoot that one.' It was a funny moment."

3. The officiating -- It's not news that college officiating can be hit-of-miss, but the Big East is having one hell of a down year. The two most egregious lapses involved Jeremy Lamb and took place seconds apart. First, as the second half ran down, Lamb bit on a pumpfake, jumped for a block, and came crashing down on some poor Villanova guard. No foul. Then, seconds later with UConn inbounding from their own baseline, the Huskies attempted to get the ball to Lamb by halfcourt. Lamb's defender did everything but tackle him and the result was no call. Now, the latter play may have been a make-up call, and I get the desire to let the teams play the game out in its final minute, but part of the job of a referee is to keep the game and its players safe, and they failed yesterday.

4. The two worst inbounds play of all time -- In the second half both UConn and Villanova decided to break out their "whatever the hell, we'll just throw the ball from the baseline to halfcourt" play. UConn's -- the aforementioned Lamb mugging play -- almost cost UConn their season (and would have been a fantastic time to use one of George Blaney's eight leftover timeouts. Villanova's was somehow worse. Up two with thirty seconds left in regulation, a successful inbounds play would have gone a long way to sealing a win for the Wildcats. Instead Alex Oriakhi Roscoe Smith intercepted the ball at halfcourt, allowing UConn to tie the game and force overtime.

BONUS -- Free throw shooting -- I'm not sure this counts as dumb, but it sure was hard to watch. UConn went a miserable 10-21 from the line yesterday. Jeremy Lamb was the only Husky to shoot above 50 percent from the line (8-11), but even he missed a crucial overtime free throw that would have given the Huskies a three-point lead. Sure, that worked out for the Huskies, but if Villanova had driven down the court and hit a last-second three, no one could say it wouldn't have been a fitting ending. The worst misses might have come from Ryan Boatright who missed a late pair that would have tied the game -- an exact inverse of his game-saving free throws against South Florida Florida State.

5. Shabazz Napier's final shot -- Only Shabazz Napier -- playing with a busted ankle and well aware that a red-hot Jeremy Lamb was open -- would pull up 30 feet from the hoop with three seconds left on the clock. It was the lowest basketball IQ moment in a career full of them. But at the same time, the fact that only Shabazz Napier would take that shot means that only Shabazz Napier would hit that shot. And hit it he did. Shabazz may have sold his soul to the basketball devil, but it worked. After a season where reason and rationality have led UConn to nowhere but disappointment, it was the stupidest play of all that instantly erased all of the misery and dread the last two months had created. The rational part of me says that UConn should get pounded into submission on Saturday, but I'm not listening to that part of my mind today. Instead I'm watching Shabazz hit a 30-foot game winner on an infinite loop and for now I could not be happier.