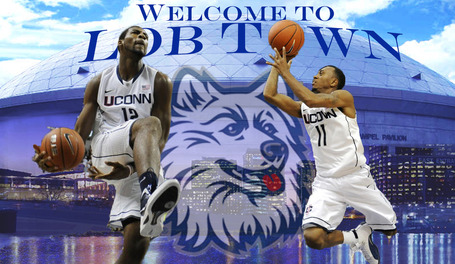 If this season is really starting to turn around -- and I think there are signs of that after a closer-than-the-score-indicated Syracuse loss and the DePaul blowout -- then today's game is big. A win over Marquette gives the Huskies some much needed momentum (it'd be their first two-game winning streak in over a month) and loads of resumé security.

Marquette, which is ranked 12th in the country, has won nine of its past 10 games and is second in the Big East. Defeating the Golden Eagles would easily be UConn's biggest win, and barring a horrible collapse would virtually assure the Huskies of an NCAA tournament bid.

It helps that Marquette isn't a big team. It appears Davante Gardner, their 6'8", 290 lb. power forward won't be able to play, which means the Golden Eagles won't have a single player over 6'7". That bodes well for Andre Drummond, who has put together two impressive games in a row and been a lot more aggressive around the basket. Look for the Huskies to go to him early and often.

Things get trickier for the Huskies on the perimeter. Marquette is lead by senior guard Darius Johnson-Odom, who has always done well against UConn, and at 6'2" and 215 lbs. he'll be a tough for either Ryan Boatright or Shabazz Napier to effectively check.

The game tips off at noon from the XL Center in Hartford. ESPN has your tv coverage, join us in the comments below. Go Huskies.