While most of the attention during UConn's struggles has (rightfully) focused on its anemic offense, the Huskies' defense has clearly lagged behind as well. As evidenced by both brick-filled Final Four games, UConn's post-season surge last year was built on a foundation of hard-nosed defense. And if the Huskies are looking to make a similar turn around this season, the catalyst could come with improved effort at the defensive end. No area of team defense has come under more scrutiny than UConn's ability (or lack supposed thereof) to guard the three point shot.

UConn's defensive strategy is a calculated gamble. The guards funnel the ball into shot blockers in the interior forcing opponents into taking bad shots and succumbing to UConn's advantages in height and length. The strategy is designed to prevent opponents from getting easy shots close to the basket while minimizing fouls forcing opponents to outscore the Huskies by scoring from beyond the arc instead of in the paint or at the foul line. The flip side of the stout interior defense is a susceptibility to teams that get hot from three.

We can see evidence of this in several statistics. The Huskies rarely foul, block a high percentage of their opponents shots and hold their opponents to an extremely low percentage on 2-point shots. This season UConn's 24.1% defensive FTA/FGA and 17.5% block% are both 4th in the nation, while their opponents' 39.5 defensive 2p% ranks 3rd. (All stats/rankings per Kenpom.com, subscription required.) UConn annually ranks near the top nationally in these categories. However, over the past 8 seasons, UConn's average rank for opponents' 3-point percentage is 66th. This year UConn opponents' have shot 34.8% from the line against them, good for 189th nationally.

3-point defense is one of the most commonly cited deficiencies amongst writers and fans, particularly after games like the losses to Syracuse and Louisville in which the Orange and Cardinals lit UConn up from downtown, combining to shoot 51.2% from beyond the arc. We know UConn's 3-point defense isn't great, even when compared to other seasons. But we also know that trading open three-point attempts for open two-point attempts is a purposeful choice based on their defensive strategy. So how much is this deficiency costing the Huskies, and are any players or groups of players more culpable than others? To answer these questions I broke UConn's 3-point defense down by games. (Breakdown after the jump)

The first thing you'll notice about the chart is that while there have certainly been several teams that have shot better than their percentage, there have also been several who have performed well below their season averages. This regression to the mean is best exemplified by Seton Hall. In Newark the Pirates shot 14.09 percentage points above their season average en route to a 12 point win. A few weeks later, in Hartford, Seton Hall shot 16.68 percentage points below their average en route to a 23 point loss. Certainly some of that is due to an improved defensive effort from the Huskies, but some of it is just dumb luck. 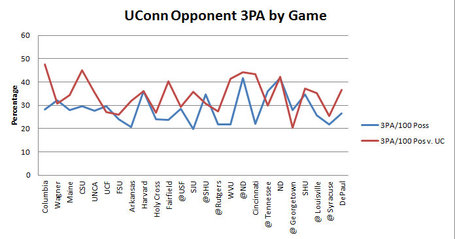 UConn opponents have averaged an extra 5.92 three point attempts per 100 possessions, which works out to 3.8 more per game (using Uconn's average pace of 64.7 pos/game).

Let's put these numbers into context by looking at how past UConn teams have fared defending the 3-point shot. To do this I compared the 3-point percentage by UConn opponents in games against the Huskies against their season percentages, weighted by attempts (Opp Est. 3P%). Basically, this table shows the actual 3-point percentage shot by UConn's opponents and what their opponents would have shot had they all shot their exact averages. By comparing the percentage allowed to opponents' expected percentage, we're able to control for strength of schedule. 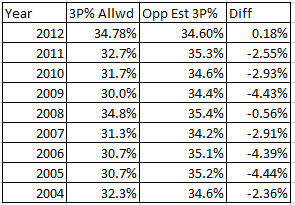 The UConn team that held its opponents the furthest below their expected averages was the 2004-05 team, which knocked 4.44 percentage points off their opponents expected average. If UConn performed to that level this season it would be a huge bump in the rankings (up to 28th). The difference would work out to 70.53 points over the course of the season, 4.38 points/100 possessions, or 2.83 points per game. So if UConn's 3-point defense were to improve to its best mark over the past 8 seasons, it would save them a little less than one made three per game. For what it's worth, if they improved to last year's levels it would save them a little over half a made three per game (1.69 points/game).

So, is there a statistical explanation for why the 3-point defense has been lacking? More specifically are there any particular perimeter defenders, or groupings of perimeter, who are particularly responsible?

My first thought was that the switch to the shorter 3-guard lineup would be responsible for the uptick in opponents' 3-point shooting. Instead, the 3-guard backcourt has been the best at limiting opponents from beyond the arc. Of the other possible wings DeAndre Daniels seems to be on the court most often when the team does its best job of limiting opponents 3-point percentage. Niels Giffey and Roscoe Smith (playing the small forward position instead of the power forward position) have been among the worst. I'm not sure I'd be comfortable saying Daniels necessarily does a better job against the 3-point shot based on these numbers because his minutes are a little more front-loaded toward the weaker part of the non-conference season. In fact, I'd say there's nothing particularly glaring here aside from debunking my thought that the 3-guard lineup would have a difficult job defending the 3-pointer due to lack of length.

All in all, fans and commentators are correct in their assumption that this is one of the worst UConn teams in recent memory when it comes to guarding the three. However they are also guilty overestimating the effect of UConn's difficulty against the 3-ball. While UConn is worse, they aren't that much worse. The issue appears to be a team-wide issue instead of a personnel issue, which does hold out the hope that the team will improve down the stretch and into the post season. After all, last season's team knocked an additional 1.4 percentage points of its opponents' 3 point percentages in the post season.

Check out Carl Jackson's work at UConn by the Numbers or on Twitter.