Both the men's and women's teams will have a pregame ceremony and wear special patches to honor the victims.

UConn's men's and women's basketball teams will honor the victims of Friday's massacre in Newtown before their games this week, and both teams will wear green and white "SH" patch. Green and white are the colors of Sandy Hook elementary school.

Here's the schools release, which acts fans attending the games to be in their seats 10 minutes early for the ceremony:

Fans are asked to be in their seats for these games by 6:50 p.m. for the ceremonies. The UConn men play Maryland Eastern Shore on Monday at 7:00 p.m. while the women play Oakland on Wednesday at 7:00 p.m. Both games are at the XL Center in Hartford.

The UConn men's and women's basketball teams will both be wearing patches on their games jerseys in recognition of the tragedy. The patch is a rectangle with a green background, a black outline and the letters "SH" in white. The school colors of Sandy Hook Elementary School are green and white. UConn bench personnel and others associated with the game will also be wearing special green and white ribbons.

And here is what the patch will look like: 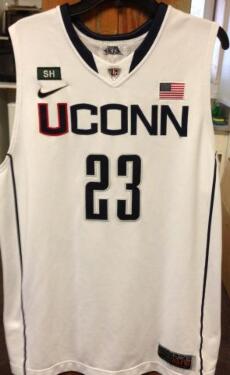 As a side note, if you passed by these parts this weekend, or follow us on twitter, you probably noticed we've been very quiet, and that was of course intentional. I love Connecticut and I spent a good chunk of my youth just up the road from Newtown. I was horrified by Friday's news, as I'm sure all of you were, and I just didn't feel like dealing with any of the sports news that broke over the weekend, including the fact that the Catholic Seven announced their departure from the Big East. We'll be back to our regularly scheduled nonsense shortly, and we will have an open thread for tonight's game as well, although it surely won't be as joyous as it should have been. As always, thanks for reading.