It doesn't matter that UConn won, not kneeling at the end of the Pitt game was inexcusable

The coaching staff made a horrendous mistake against Pitt, and it's a mistake they've made before.

Share All sharing options for: It doesn't matter that UConn won, not kneeling at the end of the Pitt game was inexcusable

In my recap of UConn's win over Pitt on Friday, I expressed my dismay that UConn -- with the ball and the lead with under two minutes left -- decided to run the ball twice before taking a knee to end the game, despite the fact that Pitt had exhausted its timeouts. This, in my mind, is inexcusable coaching negligence. The Huskies were three kneels away from sealing the game and by running Lyle McCombs into the line the coaching staff risked both a turnover (and potential loss) and injury.

However, it appears that there are some who don't share my view. Here are the Courant's Desmond Conner and the Journal Inquirer / SNY's John Silver in Monday's football chat on the Courant's website: 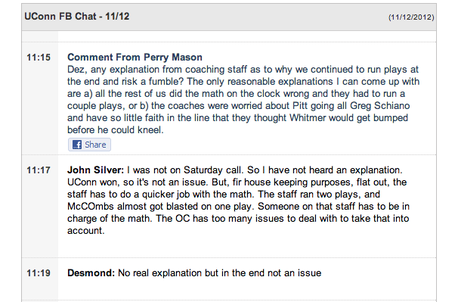 Essentially Conner and Silver are saying that this was a mistake, but since UConn won it's not a big deal. That's wrong, and it is a big deal. In evaluating a coaching decision you should not look at the result, but rather at the process that brought the coach to that decision. And when you can end the game by entering the victory formation and taking a knee there is absolutely no legitimate reason to do anything else.

There is one result to a kneel down: you take a knee and run the clock.

On the other hand, there are four possible results to what UConn did. In order from best to worst they are: 1) McCombs is tackled and you run the clock. 2) McCombs breaks a long run for a score, but in doing so winds up giving Pitt the ball back (UConn still wins 99.9 percent of the time here, but that .1 percent can be a real bitch.) 3) UConn fumbles and revives Pitt. 4) Someone (probably McCombs or a member of our already crippled offensive line) gets injured. Doing anything but kneeling is a bad idea that AT BEST gets you what kneeling is guaranteed to get you.

Silver is right that someone has to be in charge of the math. That sounds like a great idea to me. In fact, the concept of having someone who would "coordinate" the "offense" to make sure they didn't do something stupid like risk a turnover or injury is such a good idea that I can't believe UConn hasn't thought of it already and hired an offense coordinating person. They should get on that.

What makes this worse is that this isn't the first time UConn has made this mistake. By my count the Pitt game was the fifth time under Pasqualoni that UConn has had the ball while leading by a single possession in a clock-killing scenario. In two of those instances, against Maryland and Buffalo, UConn got the ball with less than 20 seconds. They knelt both times, but with that little time on the clock doing anything else would be grounds for a lifetime ban from even watching football.

In the three other instances UConn gained possession with more than just a handful of seconds on the clock. One of those games was the Pitt debacle. Another was against Syracuse last year, when UConn gained possession with 1:31 left and Syracuse out of timeouts. UConn did what it should in that instance and kneeled three times -- so the coaching staff gets a gold star for that one.

But the third instance, against South Florida last year -- two weeks before that Syracuse game -- saw UConn make the EXACT SAME mistake they made Friday. With a little more than a minute on the clock, UConn has the ball while USF had one timeout. This is easy math: running a play gets you a 40-second play-clock. Which means that three kneel downs would give the Huskies enough time to eat USF's last timeout and still win. Instead, UConn ran the ball on first down, USF burned the timeout and then UConn RAN AGAIN on second down before taking a knee on third down.

So in two out of three opportunities when even the slightest amount of common sense would have locked up a win for UConn the coaching staff blew it, instead risking both a turnover or injury for no discernable reason. That's inexcusably bad coaching, win or not.