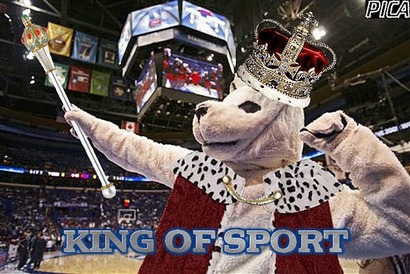 It is with moderate pleasure that I announce that UConn has been selected as part of the SBNation Conference Re-Draft.
Why only moderate?
Because it took 39 picks before our beloved Huskies were selected. We're New York's college team, for crying out loud! We're the defending men's basketball champions! We've won like 80 women's basketball championships! FOR THE LOVE OF GOD, FIELD HOCKEY!

But whatevs. Football's king, I guess.
We graciously thank The Empire (the conference selected and hosted by SB Nation's SEC blog, Team Speed Kills) for picking us. TSK's last draft update was here, and you can read more about the SB Nation Redraft project here.

We hope that our combination of first-rate basketball, somewhat fledgling football, all-around sports success (top college soccer fanbase in America!) and our access to all the rich people in Fairfield County will help make our new fake conference the best in the country.

Below the jump, meet our new fake-conference mates:
UConn was the seventh team chosen by the Empire, and we join the following six teams:
--Alabama
--Oklahoma
--Nebraska
--Texas A&M
--Arizona
--California

(Conferences can continue to pick teams until they are satisfied with their league makeup...no set number or anything.)

First thoughts are in regards to competitive balance:

UConn would win many, many basketball games in this league. I would say it's pretty clear cut that UConn is either the No. 1 or No. 2 basketball program in this list (Arizona being the other one head and shoulders above the pack...they're probably a top 15 program for the near future), and should remain so for a while.

On the women's side, this actually might make things tougher for UConn. You've got the defending national champion Texas A&M and an Oklahoma program that's always in the mix.

Of course, now that we're getting towards the second half of the draft, it's likely that more strong basketball programs (who maybe don't bring as much to the table in football) will be taken, but so far it seems like Coach Cal (and his successor) could expect to cruise to 25 wins per year for a little while.

As for football, well...I hope you don't mind finishing higher than fourth in the conference for the next 20 years. Oklahoma we all know about...and I feel comfortable saying we could pencil in regular beatings at the hands of the Crimson Tide and Huskers.

Compared to our position in the Big East (where we are generally among the top teams most years in hoops and basketball), I'm not so sure this would an improvement.
But hey, as this re-draft is showing, football is king, and even if we were to turn into the Duke or Kansas of The Empire, if we maintain our basketball programs, we'd still probably end up a winner on a number of fronts.

But it also depends on who else is joining us. Stay tuned.