Share All sharing options for: DeAndre Daniels commits to UConn 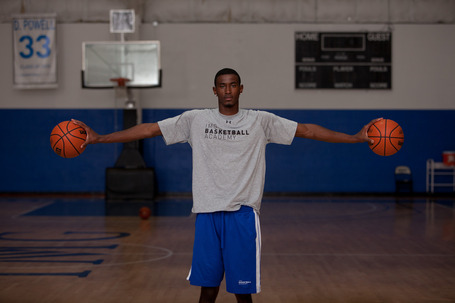 DeAndre Daniels, a four-star power forward from Woodland Hills, California has committed to play at UConn this fall. Daniels checks in at 6'7" and will be joining Jeremy Lamb as a threat on the wing. Rivals.com has him as a five-star recruit and ranks him as the 10th best player in his class and the 3rd best small forward. He is rated as a four-star recruit by Scout.com. He's ranked 29th in his class and is the seventh-ranked power foward.

He's coming to UConn after a year at IMG academy and at one point seemed like he was headed for  Texas. He was also considering Kansas, Duke and Oregon.

Daniel's is one half of a (recruiting-penalty reduced) 2011 class. He will join four-star point guard Ryan Boatright in Storrs next year.

The decision was announced on IMG's website. Click the link for more information and to see a video interview with Daniels.