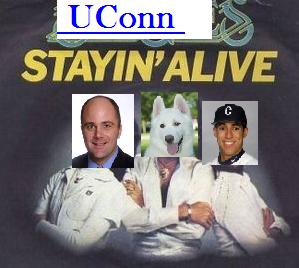 Despite a rocky start to their College World Series hopes in the form of a blowout loss to Coastal Carolina Friday, the UConn baseball team is still alive and kicking.

The Huskies crushed Coastal Carolina Sunday afternoon, 12-6, to advance to the Clemson Regional final against the host squad. UConn will play Clemson in the first of two possible regional final games Sunday night at 7 p.m.

Three-hit days by 2B L.J. Mazzili and 1B Mike Nemeth keyed the Husky offense, which struggled throughout the Big East Tournament and into Friday's game. But the Huskies have now scored 23 runs in their last two games. And 10 runs was more than enough for starter Brian Ward, who was both very good (three runs, six hits) and very helpful (he went eight innings, saving the key bullpen guys for tonight).

UConn jumped out to a 4-0 lead, though Ward almost gave it all back in the third. But after Coastal pulled within 4-3, Ward settled down and the offense blew it open, scoring three runs each in the sixth and seventh innings.

It's the first time UConn has won multiple games in the NCAA baseball tournament since 1979 (when they last advanced to the College World Series proper), and it makes them one of the 32 college baseball teams still playing.

So yes, UConn's Year of HAM will continue for at least three more hours.

Progressing any farther than the de facto Round of 32 is going to be next to impossible, though. The Huskies take on Clemson, the home team, tonight in front of a hostile crowd. If they can somehow beat the Tigers, one of the better teams in one of the nation's two best conferences, they'll have to do it again Monday. (Stupid double-elimination tournaments.)

Unfortunately, it doesn't look good. I think we all know that no up-and-coming program led by a homegrown player and a rising-star coach has ever taken that next step with a program-defining win over Clemson, reaching heights that up-and-coming program only reached 30 years before. That could never happen, ever.

Feel free to use this post for discussion of the game...or if you're all bashful, you can follow along as I follow along on the Twitter machine. The game is NOT on TV, but you can listen online at WHUS for sure, and probably WTIC as well.