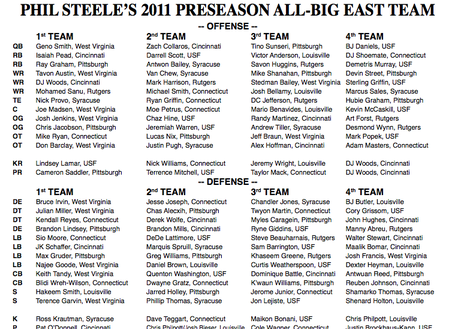 If you would like to design a website, then you should not call college football enthusiast/ human super-computer Phil Steele (unless you want that website to look like it was right out of 1998, in which case go right ahead). However if you want some very-detailed college football predictions then it is probably a good idea to ca Phil Steele (because of, you know, the whole human super-computer thing).

Steele is currently gearing up for the release of his yearly preview magazine and last week dropped a hint of what was to come with this preseason All-Big East team (pdf).

The good news for the Huskies is that 17 of them made Steele's teams. The bad news is that there are only eight Big East teams and Steele goes as deep as a 4th team. That means there are 112 open spots so it's kind of tough not to get a ton of players on the list (sidenote: Hello Rutgers and your seven selections!).

There are a few places where Huskies were clearly selected just to fill out the list. For instance D.J. Shoemate is a 4th-team RB, which makes him either seventh or eighth in the league. But the overall picture is one of a potentially competent UConn team that has absolutely nothing in the way of weapons on the offensive side of the ball.

The one bright spot may be the cornerback position, where UConn struggled mightily last year. Steele seems to think a year of getting torched did UConn's backfield good as he picked Blidi Wreh-Wilson as a 1st team corner and Dwayne Gratz as a member of the 2nd team.