Share All sharing options for: PHOTO: Kemba Walker inducted into Huskies of Honor

UConn surprised the junior point guard and NCAA Tournament Most Outstanding Player by revealing at today's victory ceremony that a plaque had already been raised in his honor. Walker broke down in tears as the panel was unveiled.

It's no surprise that Walker made the wall, after all, he is a first team All American. The surprise came in the quick turnaround. Apparently two members of the athletic department fits hatched the idea after UConn clinched a Final Four bid and they got it approved by head coach Jim Calhoun yesterday. They were the only three people who knew of the plan prior to today's rally, according to the Courant.

Of note? The dates on the plaque read 2008-2011. If you had any doubts about Walker leaving, there is your answer. 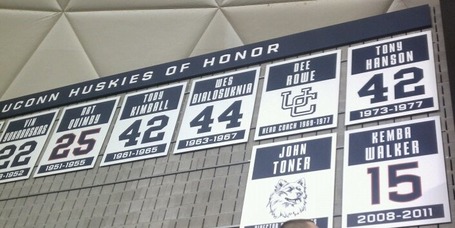 Thanks to Mrs. Kemba Walker is my Hero for the photo.