Reminder to students: Rioting is frowned upon

Share All sharing options for: Reminder to students: Rioting is frowned upon 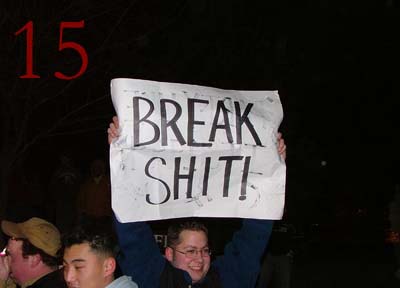 No. Wrong. DO NOT BREAK SHIT.

Funny story: last night I was at the Houston game watch for the women (still stunned about that) when my buddy showed me a message he just got from his friend back on campus. It appears students received an e-mail reminding them what happened after the 2004 dual championships, namely, riots, tons of property damage and dozens of arrests.

I was initially confused about when the photos were taken and threw up a tweet that implied it was Saturday night, an error I hastily corrected.

Still, the Internet being what it is, pictures of drunk kids rioting were a hit. They were heavily retweeted and before long, they showed up on BroBible and Deadspin (with both thankfully noting the 2004 date).

Now, seven years later and without context the photos might seem like fun when they pop up on humor sites, but it is important to remember the context. Between some very ugly spring weekends and basketball riots, UConn was earning itself a near West Virginia-level reputation and the school was not happy about it. People were arrested for the riots, a lot of people. Students were suspended for long periods of time and at least one was expelled. It was not good.

Enjoy the game tonight. I'm sure Gampel will be a blast. If UConn wins, that'll be fantastic, and feel free to do the whole "We're going to run around the campus and cheer" thing that UConn fans do so well, but don't tip cars, and don't light stuff on fire, because people will be watching and it won't end well.