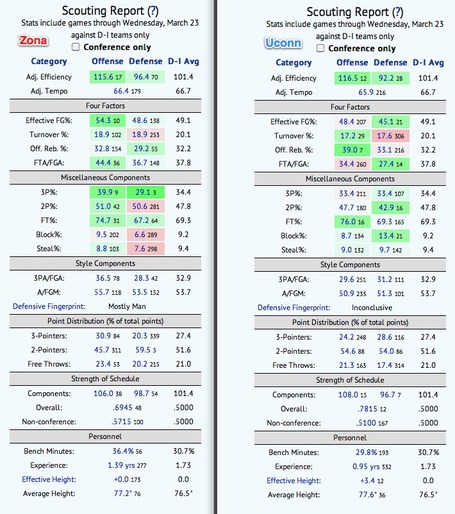 Some quick thoughts: Arizona's defense, though superbly effective at stopping the three, is not very good inside the arc; since UConn is 248th in percentage of points from behind the arc, that shouldn't be much of a problem.

Arizona almost never forces turnovers, and UConn almost never turns it over, so don't look for that to change.

Arizona gives up a decent number of free throws, so UConn will want to try and take advantage of that, especially if they can manage to get the exceptionally studly Derrick Williams into foul trouble.

On the other side of the ball, UConn has played only middling 3 point defense this year, and Arizona loves to shoot the three. Derrick Williams hits an astounding 58% of his three point attempts, and the team has three more guys who shoot over 40% from behind the arc. Whoever guards Derrick Williams (probably Roscoe Smith) will have to do an excellent job on the perimeter and rely on his teammates for help inside. Not going up for shot fakes is crucial.

Both teams are fast and athletic; UConn has a bit of a height advantage, which is one reason why they have been a better defensive team so far this season.

The main key in this game is going to be how UConn plays against the force of nature named Derrick Williams. Roscoe Smith is going to need to play the defensive game of his life, and get help from everybody else on the floor.

Just because I don't think you can overemphasize how important Derrick Williams is, here are the top 4 offensive rating players in the country who use >28% of their teams' possessions: