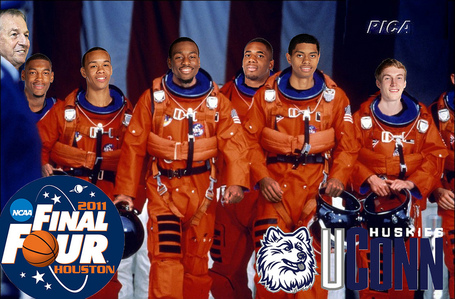 Getting out of the first weekend was not much of a problem for UConn, and the reward is a cross-country trip for the fourth time in 12 years.

Tonight, in the West Regional semifinal in the Honda Center in Anaheim, Calif., the Huskies face a very intriguing San Diego State team that has basically done nothing but win all season long. The Aztecs' schedule is probably better than us East-Coast-Biasers suspect (out-of-conference, SDSU played and defeated St. Mary's, Wichita State, Gonzaga out of conference - not name-brand teams, necessarily, but all in the top 50 nationally according to the KenPom ratings.)

And the Aztecs, as noted in Porter's piece on Alex Oriakhi, might be the best frontcourt the Huskies have faced. It's a potential mismatch UConn will have to overcome.

But the Huskies can cause their own mismatches, too. As Justin notes in his preview, SDSU has seen a player roughly of Kemba Walker's caliber, but of course Kemba is a different animal from anyone in college baskeball.

I am inexplicably confident in UConn lately. If they continue their tried-and-true formula of the last three weeks (rebounding + Jeremy Lamb + third option du jour + Kembawesome), I think they win this game and continue their season Saturday. If the formula breaks down - particularly with the first two variables I listed - San Diego State is more than capable of running all over Kemba and the pups.

I for one am not yet tired of watching this team play basketball. Let's hope they aren't tired either.

Check out Justin and Porter's previews from earlier today for some pregame reading. The game will be televised on CBS (Raftery & Lundquist doing the announcing!) and tips off at approximately 7:15.