Zone-busting: Have the Huskies finally put their offensive woes behind them?

Share All sharing options for: Zone-busting: Have the Huskies finally put their offensive woes behind them?

The blueprint for beating the Huskies is simple.

At least, it was.

Any team that deployed a competent zone defense brought their usually transition-happy, up-and-down offense to a screeching halt.

Ever since Louisville rode a late switch into a matchup zone to a double overtime victory in Gampel Pavilion, sending UConn into a tailspin after a near-perfect third month of the season, nearly every team left on the Huskies' regular-season slate used the defense to some degree. And why wouldn't they? UConn lost five of the seven regular-season games in which its opponent went zone for the majority of the contest.

But in the seven times teams played primarily zone against them -- which, for this exercise, we've determined to be the following: vs. South Florida, vs. Syracuse, at Seton Hall, at St. John's, at Louisville, vs. Marquette and at West Virginia -- the Huskies scored almost 11 points fewer per game, shot approximately six percent worst in FG%, eFG% and TS%, saw their TO margin dip from +0.7 to -2.4, and won just two games (against the Bulls and Pirates, the two worst teams in the sample). 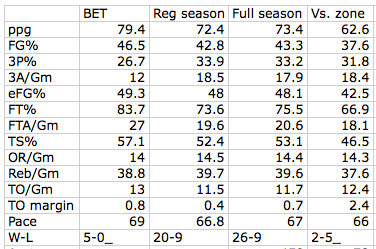 (Don't mind the underscores; can't stop them from turning into dates.)

Admittedly, seven games is a small portion of their 30-game regular season off which to work, especially with only three coming at home. But you don't really need to look at the stats to know that UConn struggled against the zone. With defenders keyed in on stopping ballhandlers from penetrating into the paint and getting to the rim -- the lifeblood of the Huskies' offense -- the now-rare defensive set forces anyone other than Walker to win the game.

Problem is, the Huskies have one of the worst supporting casts among BCS teams. Throughout the regular season, the only non-Kemba UConn player to break double-digits in scoring average was Alex Oriakhi, who gets virtually all of his points off of put-backs and tip-ins. And none of their players can be considered marksmen, Walker included. The Huskies are one of the worst 3-point shooting teams in the country at 33.2%, and aren't much better from inside the arc, with a team 2-point field goal percentage of 47.5% (No. 187 nationally); in total, no player cracks 52 in eFG% aside from Jeremy Lamb.

With no real post game to draw the interior defense's attention and no real 3-point threats to stretch the floor, the zone is able to go straight for the heart (Walker), causing the offense to freeze up as it searches for answers that aren't really there.

That is, until this past week.

The Huskies turned the theory on its head in their MSG sojourn, capping off a five-for-five Big East Tournament run with two straight victories against zone-wielding, top-20 defenses in Syracuse and Louisville.

Going back to the eye test, UConn simply looked better when up against the zone; unlike in weeks prior, there was better ball movement and more of a flow to the offense.

However, in terms of executing, the Huskies were just as inefficient as they had been all season against the zone.

In their final two tournament games (another miniscule sample size) playing at about the same pace as they had all season (~66, 67 possessions), UConn shot just 39.6% from the floor -- only two percentage points better than in seven regular-season games against the zone -- and ended with the exact same eFG% (42.5%) it had against zone teams. The Huskies did average 72.5 points over the two-game span, less than a point shy of their season average, but take out the extra five minutes of overtime against the Orange and it dips to 68.5 ppg against the zone -- a six-point improvement against zone teams but still five points worse than their regular-season average. 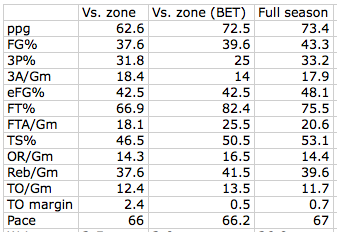 But in spite of the usual lack of efficiency against the dreaded defense, they still came away with as many wins against the zone in two days as they'd accumulated in seven previous tries.

The biggest adjustment is the most obvious: Walker was simply unstoppable.

Often labeled as a mere high-volume scorer because of his huge usage rate (28th-highest in the country), the junior All-American had been especially inefficient against zones in the regular season, scoring just 18.7 ppg on just 33.1 FG% and 42.1 eFG%.

But Walker used an even higher percentage of the Huskies' plays against Louisville and Syracuse -- over 50%, fact -- and shot 47 percent from the floor, which is even better than his season average of 43%.

However, the way he -- and the team in general -- got points changed significantly.

A terrible 3-point shooting team at 33.2 3P% (221th in the nation), UConn made a concerted effort the entire tourney to attack the paint in place of taking ill-advised shots from behind the arc. The Huskies hoisted up six fewer 3s in their five-game run than they had been all season, and four-plus fewer in their final two games alone.

Instead, UConn took it to the rack, averaging 31 ppg in the paint, and, most importantly, got to the line. It averaged 25.5 foul shots against Cuse and the Cards (with Walker himself taking 11.5 a game, nearly doubling the amount he had in the regular-season zone sample), a seven-shot increase against zone teams. And best of all, the Huskies made them count. Whether it's the fatigue caused by the zone or a fluky result of a small sample size, UConn shot just 67 percent from the line in the regular season against the zone. But in their last two games last week, the Huskies were dead-on, missing just nine total free throws for an 82.4% success rate.

But is the improvement sustainable going forward?

Walker will almost always get his, but the Huskies can't exactly rely on another 33-point performance like the one he had against the Orange, especially with his less-than-stellar track record against zones. Nor can they really count on seeing such a surplus of freebies.

Walker should continue to elicit a high amount of fouls given his style of play, but there's no telling if the uptick was in part a result of some favorable whistles. And even two fewer calls could've swung such close contests this past weekend. If they can't get to the line, their inconsistent shooting efforts likely won't be enough to carry them to victory against the zone.

However, how they approach the zone may not be as important as who they used to attack it.

Charles Okwandu started the first four tournament games, but by Saturday, he had basically been phased out, playing just nine total minutes against the Cardinals. Instead, the Huskies often went small, putting Oriakhi at the 5 and either Tyler Olander or Jamal Coombs-McDaniel at power forward (or, in the latter's case, added another hybrid 3/4 to pair with Roscoe Smith).

The move does three things. First, it simply puts the team's best players on the floor. Okwandu, whose stones hands make you yearn for the Flubber-ridden mitts of Hasheem Thabeet, provides next to nothing offensively, with averages of just 2.9 ppg and 2.9 rpg. According to Kem Pomeroy, the Huskies are in the bottom 30 nationally in terms of production from their center and power forward (thanks to llimllib for the link), and getting Ok off the floor is a step in the right direction to fixing that.

Second, it opens things up more. Because of their limited offensive games, both Okwandu and Oriakhi need to be in the blocks. Deploying both just clogs up the paint for Walker and UConn's other slashing guards. But by replacing them with either Olander or Coombs-McDaniel, who have at least adequate mid-range games (and in the latter's case, a solid 3-point shot, too), the Huskies are able to stretch the floor and open up driving lanes that simply aren't there when Okwandu plays.

And third, it makes the team far more athletic without sacrificing much on the boards. Despite his size, Okwandu really doesn't provide much rebounding, with a 7.9 OR% and a 12.8 DR%. All things considered, Coombs-McDaniel (3.4 OR%, 13.5%) -- who isn't as effective on the offensive glass likely because he's usually positioned on the 3-point arc -- and Olander (7.9 OR%, 13.5%) are just as good if not better rebounders. Put them alongside a rebounding monster in Oriakhi (14.3 OR%, 17.3 DR%) and an above-average rebounding forward in Smith (9.2 OR%, 13.0 DR%) and the Huskies can still crash the boards with the best of them, as evidenced by the 41.5 rebounds they averaged against Syracuse (when Okwandu played 22 mins) and Louisville (nine).

And what they lack in size is more than made up in speed and athleticism. The Huskies thrive when they're running in transition, and turning misses and turnovers into points or at least offensive possessions against unsettled defenses was a big key to their BET turnaround. Okwandu is athletic for a man his size, but he's not gonna blaze a 40 anytime soon. Getting Coombs-McDaniel -- or even Olander, if only because he runs like he's being chased by an axe murderer -- out there makes an already quick team that much faster.

It's hard to endorse Olander, statistically the worst offensive player on the team with a ghastly 35.7 eFG%, until he shows he can consistently contribute games like he did against Syracuse (seven points, six rebounds). But starting Coombs-McDaniel, the team's fourth-most efficient shooter at 49.7 eFG%, could really open up an already free-flowing attack. While it potentially creates matchup problems down low, both Olander and Coombs-McDaniel are long, capable defenders. Besides, only a handful of teams have a dominant center to begin with, and the offensive benefits are hard to ignore

When the Huskies try to run the high screen they love with Walker and Oriakhi, the extra shooter present will pull the defense out of the paint, leaving fewer defenders ready to swarm Walker when he makes his move -- especially now that Lamb (14.2 ppg in the BET) is likely to occupy more defensive attention. Walker had great success with this against Louisville, as he merely had to split two defenders to get to the cup when Oriakhi's defender hedged. And a Kemba-Coombs pick-and-pop could turn into a dangerous combination as well.

Whether Calhoun, whose affection for 7-foot shot-blockers is about as well known as his sideline tirades, will continue to take advantage of it, though, remains to be seen. Regardless, the pieces are there to finally turn around what has long been a crippling force to their offense.

Then again, the pieces have always been there.

Putting it all together is a different story.