How Gary McGhee got left for dead against Kemba Walker

Share All sharing options for: How Gary McGhee got left for dead against Kemba Walker

With 18 seconds left and one shot to knock off the Big East's best team, the Huskies really had just one choice.

Even Kemba Walker knew it.

Anybody in the world knew that ball was coming to me. I wanted to take that shot.

And yet, with their pre-NCAA Tournament season hanging in the balance, Pittsburgh someone how found its least athletic player, 6-11 center Gary McGhee, on one of the quickest ballhandler's in the NCAA.

All because of a simple pick-and-pop.

Anticipating a screen-and-roll with Walker and Alex Oriakhi, Panthers coach Jamie Dixon, according to McGhee, switched McGhee off of Oriakhi and put the center on Jamal Coombs-McDaniel. In McGhee's place Dixon put Nasir Robinson, a 6-5 forward more capable of handling Walker on a swtich off a screen.

But like Notre Dame before them, the Huskies eschewed their normal end-game call, instead choosing to go right at McGhee.

Whether planned from the get-go or decided on the fly once noticing the defensive switch, UConn ran a simple high pick-and-pop with Walker and Coombs-McDaniel and essentially cleared out its three other players to the sidelines. 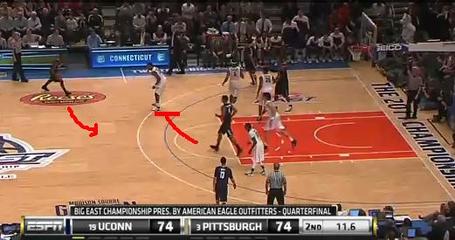 McGhee then "shows" on Walker, presumably to impede his progress and allow Brad Wanamaker to switch back. 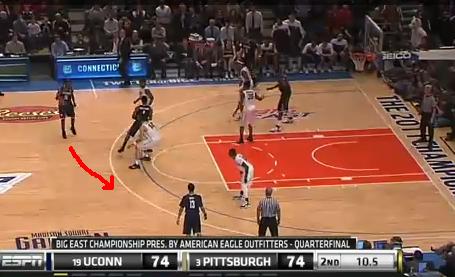 But instead of doubling-down on Kemba off the hedge and rotating a help defender to cover the roll man,  McGhee and Wanamaker switched -- even though, as you can see below, Wanamaker seems to be in fine position to take Walker once again. In fact, Wanamaker's recovery is most blocked by McGhee himself, who seemed set to play the swtich the whole way. 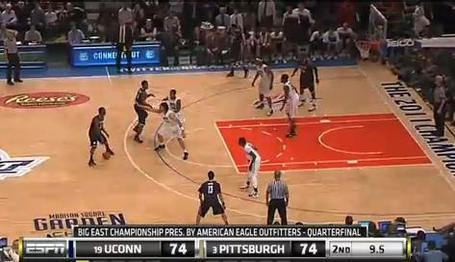 And Wanamaker, perhaps noticing that they're essentially stuck on the switch, reaffirms McGhee's decision, giving him a small push forward (seen here around between 4-6 seconds) to acknowledge that Kemba's all his.

Leaving Walker, one of the best isolation players in the country, with as big a mismatch as they come.

And, well, you know what happens next:

Although I can think of at least one time when they doubled-down on Walker and let a defensive rotation handle the slip or roll earlier in the game, the Pitt players contend they had been switching all game, and they weren't going to change it, regardless of the stakes. And to their credit, it had been moderately effective, as Walker, despite his late-game heroics, had a pretty average game, shooting 8-for-22 from the floor.

But even though they were without a timeout, the Panthers still had about 10 seconds of game clock left after the switch with which to adjust on the fly. A tough task, sure, but not impossible. Upon notcing the switch, Walker takes the ball at the top of the key and dribbles out about four or five seconds before actually making a move. All the while Wanamaker, like most of the Pitt defenders, shades into the paint looking to help on a Walker drive to the basket.

He simply never acts. Worried about both Kemba blowing by McGhee to the rim and leaving Coombs-McDaniel open for a 3, he hedges slightly at Kemba before staying home when he probably should've run out at and forced the ball out of Walker's hands.

The Panthers' defenders may have simply been following orders, but Dixon or someone on the court should've done something about the glaring mismatch in the biggest possession of the game. There is no way Walker should get a clean look on that possesion, especially not on an isolation against an overmatched center.

And the fact that Pitt had encountered the problem before and seemingly remedied it makes it all the most perplexing.

Then again, this is the same defense that refused to run a zone.

And because of such miscaluclations, its Big East tournament is over before it really ever started.