Share All sharing options for: TheRoundUp 12/19: Drummond isn't 'quite a tiger yet' but he's on his way 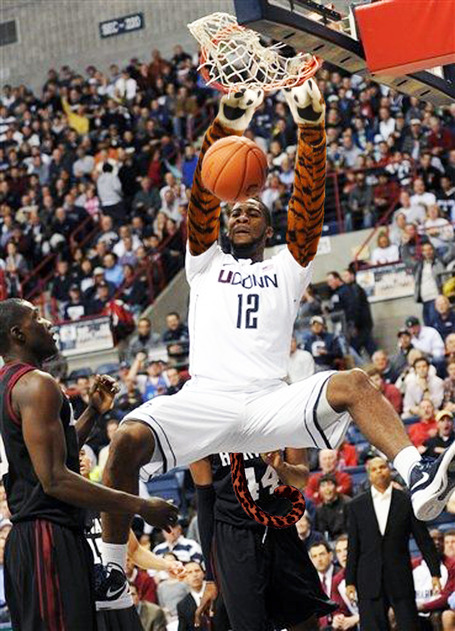 Photoshop work courtesy of Kemba Walker is My Hero, 'Not quite a tiger yet' quote courtesy of Jim Calhoun.

UCONN MEN: Andre Drummond leads Huskies in rout of Holy Cross (video)- The New Haven Register
But it was the contributions of virtually every player who entered the game for UConn that was the most impressive aspect of this win. Alex Oriakhi had his best game in a while with 15 points and Shabazz Napier doled out a career-high 13 assists. Lamb had a rough shooting day (4-for-16) but still had 10 points, seven boards and three steals. Boatright was a typical burst of energy off the bench, as was Roscoe Smith.

The New Haven Register Blogs: UConn Men's Basketball Blog: 'He's Going to Have Jerry West on His Jersey'
Andre Drummond didn't have a particularly good practice on Friday, according to Jim Calhoun. "He said to me, ‘Coach, I’m saving it for Sunday,'" Calhoun recalled. "That’s nice to hear from your freshman center. There’s no saving around here, you get better on Friday to be better on Sunday. But, quite frankly, he was a lot better on Sunday than he was on Friday."

UConn men rout Holy Cross, 77-40 - BostonHerald.com
In the Huskies’ early games, they struggled to get their big men involved, and were not able to put teams away after building double-digit leads. Against Central Florida in the Bahamas, they let a 17-point lead get away and lost. Here, the Huskies nearly doubled their previous largest margin of victory (20 points over Maine), continuing to pour it on in the second half. They scored 58 of their 77 points in the paint against Holy Cross.

The New Haven Register Blogs: UConn Men's Basketball Blog: Napier on Cousy List
The 2012 Bob Cousy Award candidates list is a long one, but Shabazz Napier is on it. And he may even have precedence on his side: Kemba Walker won the award, given to the nation's top point guard, last season.

UCONN WOMEN: Griner leads No. 1 Baylor past Huskies - Houston Chronicle
Given a chance to deliver the knockout punch, UConn went more than four minutes without scoring. Destiny Williams started Baylor’s 10-0 run with a jumper. Griner and Sims added four points each to pull their team within a point.

No. 1 Baylor women top No. 2 UConn - BostonHerald.com
The Huskies (9-1) were paced by Bria Hartley, who scored 25 points with five threes. "When you come into a place like this, you really need to withstand many things or you are not going to win," Auriemma said. "For 35 minutes, we did that. I thought we were good enough to win."

uconn huskies: in the end, no getting around griner - Courant.com
"We said coming into this game Odyssey Sims [who had 23 points] is going to decide this game. And she did. Brittney is going to get what Brittney gets every night." And what Brittney got was 25 points, nine rebounds and nine blocked shots.

Baylor Lady Bears remain unbeaten, top Connecticut Huskies - ESPN Dallas
There were 10,627 fans in attendance Sunday, and Auriemma was stunned they gave him a rousing ovation as a welcome in his first visit to Baylor. "Yeah, it's like being at a Big East road game," Auriemma joked. Of course, that's nothing like he's typically treated by fans of other teams in his conference. "They say people down South are a lot nicer. They proved it. I gotta tell you, it really took me by surprise, the reception that I got when I walked in the gym.