Alex Oriakhi is about to get benched, lose his twitter privileges for a long time

Share All sharing options for: Alex Oriakhi is about to get benched, lose his twitter privileges for a long time 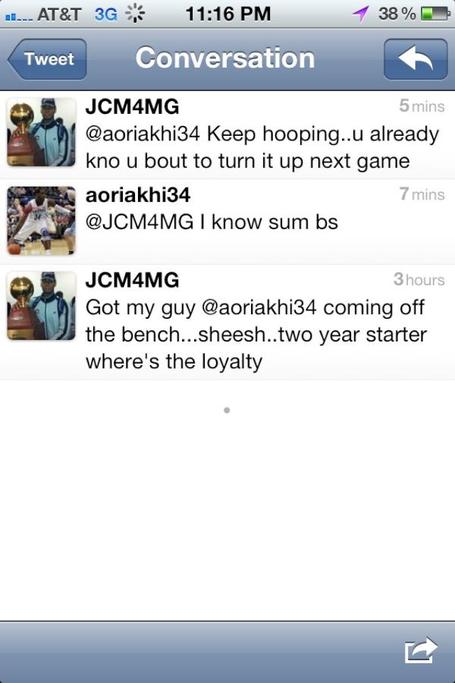 The above is a public twitter conversation between Alex Oriakhi and his former UConn and high school teammate Jamal Coombs-McDaniel. It is almost certainly not going to end well for Alex Oriakhi.

If you have not been paying attention, Oriakhi has not been playing great basketball in UConn's five games this year. Jim Calhoun, noted speaker-of-minds, has not been shy about expressing his displeasure about this, and tonight he went as far as removing Alex Oriakhi from the starting lineup in favor of freshman Andre Drummond (who, it is worth noting, played roughly 10,000x better than Oriakhi).

Coombs-McDaniel, a part of last year's title team that transferred to Hofstra, criticized the benching tonight on twitter. That is fine. Jamal Coombs-McBasketballCritic is no longer a part of the team and he's certainly allowed to say whatever he wants about it. What isn't fine is that Oriakhi responded, publicly calling the benching "BS."

Now, Jim Calhoun may or may not have known what Twitter was when he went to bed Thursday, but I'll guarantee you that he'll know what it is by morning and that knowledge is going to make Alex Oriakhi's life a lot less pleasant (and a lot less filled with minutes on the basketball court). Good luck Alex, because I fear for you. I really do.