UConn food that is worth the trip

Share All sharing options for: UConn food that is worth the trip

This basketball season, we've teamed up with the fine folks over at Volvo to help promote their new Volvo S60. A few weeks back they were kind enough to send me to Big East media day, and last week, they sent me back to Connecticut for UConn's matchup with Tennessee.

As part of the campaign, Volvo has tapped 16 writers -- one from each Big East school -- to talk about why they are the biggest fan of the Big East. In March, they'll select the Big East's biggest fan. That person's school will get a $10,000 scholarship donation, and the biggest fan will receive a new Volvo S60, which is nice.

There are a couple of ways you can help me out here. First, join the discussion, these posts are designed to talk about the experience surrounding UConn basketball, so we want to hear from you, so comment -- commenting is key. Second, like this on Facebook or retweet it on Twitter (not on Twitter yet? What are you waiting for? Get on it, and retweet this ASAP). The more exposure this gets, the better UConn, and I, do.

Third, and finally, go to MyBigEastVolvo.com and vote for me. I'm still sitting in third but Louisville and St. John's are pulling away, which isn't good for anyone -- especially not me.

This week I've been tasked with identifying the best places around Storrs to grab a bite to eat. Luckily, Meacham and I were in Storrs last weekend so we were able to do some solid field research. The result? Four great places to eat and one to drink. Plus, you know everything on the list will be Meacham approved, isn't that right Meacham? 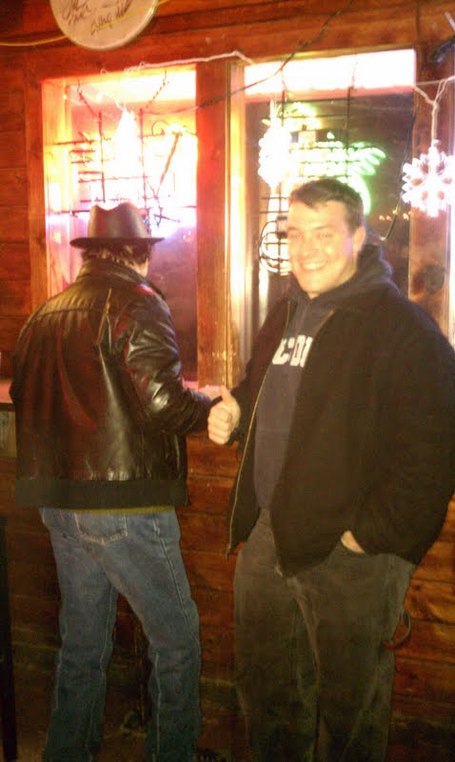 First up we have The Bidwell Tavern, a purveyor of fine food and drink that I didn't make nearly enough use of in college. The food is good though, and since the place was founded in the 1820's it has a great old-timey vibe. Most importantly, the mojo-rific combination of eating Buffalo Wings and drinking Rolling Rock beer seems to have grown out of Bidwell's weekly Rocks-and-Wings promotion, so not only is the food good, but it's good for UConn.

Next up is a joint that will always have a place close to my heart if only because its owners were as lazy in naming it as we were in naming this site. I'm speaking, of course, about The Sports Bar, which was a regular Sunday-afternoon hangout of mine for most of my junior and senior years. It is a great place to watch a game, lots of TVs with reasonably priced food and beer and a great atmosphere. That's an especially good thing because it is the only sports bar within half-an-hour of UConn.

The Bidwell and Sports Bar are both fine establishments, but let's be honest, if we're talking about food at UConn there are only two real options: Wings over Storrs and Sgt. Pepperoni's. Meacham and I made sure to hit both -- he's partial to the Wings and I can't get enough of the pizza at Pep's -- but you can't go wrong with either. However, with the Super Bowl coming up, Wings does deserve a special mention for it's "Aircraft Carrier." In four years of college I only managed to order it once, but what an order it was. It costs $120 and comes with two full racks of ribs, six pounds of boneless wings, six pounds of traditional wings, two large fries, two large onion rings and three bottles of soda. When I ordered it I had a team of about 15 people and we still couldn't finish the thing -- worth every penny.

Finally, we have Ted's, where, to be frank, the food isn't very good. But no one goes there for the food. The atmosphere is great (and greatly improved in the past couple of years, based on what I saw last week). Plus, based on my observations you have at least a 50 percent chance of seeing Gavin Edwards roaming around and a 100 percent chance of seeing this wonderful gentleman who is unwittingly posing with Meacham and always sports the same glorious fedora. I don't know his name and I'm not sure I want to, but if you went to UConn you almost certainly know his hat.