UConn needs to stop ruining the best tradition it has

Share All sharing options for: UConn needs to stop ruining the best tradition it has

This post is made possible thanks to Volvo, who we've teamed up with this season for their MyBigEastVolvo.com promotion. Go there and vote for me as the biggest fan of the Big East. If I win the school gets $10,000 and I get a car.

I love the Big East tournament. I absolutely adore it, even though it has been incredibly cruel to me. One of my earliest memories is seeing some of the Big East mascots dance around during a tournament game my parents brought me to as a small, small child, but the vast majority of my memories came while I was a student at UConn. Every year from 2006 until 2009 I convinced myself that camping out by the ticket office to get tickets and heading to MSG was a better idea Spring Break than heading south for a debauchery filled week could ever be. That was, to say the least, incorrect. During my time in Storrs UConn went 0-4 in the Big East tournament, including one loss that somehow made Gerry McNamara into a legend and another that took six overtimes. Let's just say I was not a good luck charm for the Huskies and leave it at that.

But still, I loved my time at those games because of the atmosphere. It is rare to have a game in college athletics where the crowd is split evenly between two fanbases, but I got to see it three times. You see, the Big East tournament may allow fans of all 16 teams to purchase tickets, but anyone who has ever been will tell you that two schools dominate the crowd: UConn and Syracuse. It's not hard to see why, the continued success of both programs combined with their proximity to New York City means that fans have a great chance to check out their team in a fantastic and easy-to-reach setting.

Now, why am I telling you this? You see, UConn did lose four straight times while I was in school, and three of those four losses came against the hated Syracuse Orange, but they tought me a very valuable and treasured lesson: there is nothing that opposing fans hate more than hearing the U! C! O! N! N! UCONN! UCONN! UCONN! chant.

That is why it is such a shame that UConn is ruining it.

Opposing fans really do hate the cheer. You can see it on their faces when the UConn faithful break it out, and you can especially tell by the parody versions you hear (most common: U! S! U! C! K! You Suck! You Suck! You Suck!). It just gets under opponents skin. I think it's a combination of the fact that A) It sounds awesome and B) It is only released at the most crippling, back-breaking moments of a game, thanks to UConn's first super-fan, Big Red.

If you're reading this blog, I imagine you're familiar with Big Red. But just in case, here's a primer: Big Red is, with the possible exception of Blue-and-White Kid, UConn's most recognizable fan. At the XL center he sits on the first level behind the basket opposite the student section. At Gampel (at least the last time I was there), he sits in the upper deck to the right of the students, in one of the center sections. Whenever UConn makes a big run that forces their opponent to call a timeout he stands up, spells out U-C-O-N-N with his arms and leads the crowd in a deafening cheer. He is big. He has red hair. He looks like this: 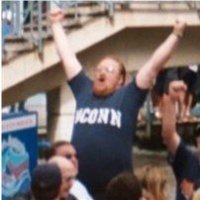 The reason Big Red's cheer has caught on and become a marker of UConn's success for the past 20 years is because, unlike so many things at UConn games, it is organic. There is no sponsor. It is not forced. It is not pre-packaged. No, instead it is a reflection of pure joy at the success of the young men who step out on the court wearing the jerseys that say "UConn." It is beatiful, and cheering along with Big Red is one of my favorite parts of being a UConn fan.

That's why I was so dismayed last Saturday when Meacham and I took in a UConn game at the XL center. Sometime in the second half, maybe after the under-12 TV timeout, the cheerleaders took the floor and the PA announcer took to the mic to tell the crowd it was time for the "U-C-O-N-N cheer." There was no reason for this. Nothing special was going on in the game, the crowd wasn't excited and even the cheerleaders looked like they didn't want to be leading a cheer that they knew was not theirs to lead. The response from the crowd was predictably anemic and I was predictably depressed. UConn has one good, organic, fan-led cheer, and it was being exploited and wasted.

I don't know when this started, this year or last year, but it didn't go on in 2009 (when I was a senior) and it needs to stop now. UConn does a similar thing by letting the cheerleaders lead the chant after every score at football games, and I'm okay with that. It is one hell of a cheer and in a 40,000 seat stadium even a guy with "big" in his name can't be seen by everyone, so cheerleaders are a natural compromise. But that does not mean they should be involved with the cheer during basketball.

This started as Big Red's cheer, but over the years it has been transformed into the battle cry of UConn fans. It is the unifying element that brings us all together to scream with one loud-as-all-hell voice. Taking it away from its organic state and scheduling it ahead of time for a TV timeout sucks all the fun and passion out of it. It's just not right and UConn needs to stop exploiting it.

I was born a UConn Husky and I'll die a UConn Husky. During my life I have yelled and screamed and cried myself hoarse over this school, but I've never screamed as loud as when I've been led by Big Red and nothing UConn can do will change that. It's Big Red's cheer. Keep it that way.